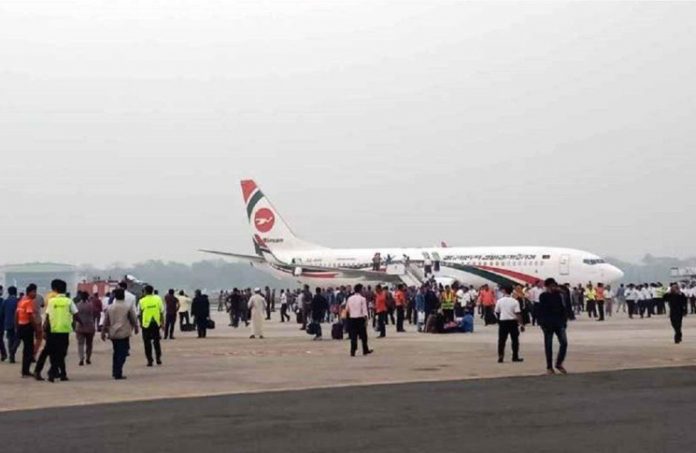 Date 24 February (image above)
Aircraft Boeing 737-800
Location Chittagong-Shah Amanat International Airport (CGP), Bangladesh
Fatalities 1
Description The aircraft was hijacked by a 26-year-old male passenger during the first leg of a flight from Dhaka to Chittagong and Dubai. The aircraft departed Dhaka’s Shahjalal International Airport at 11:13 UTC (17:13 local time). Fifteen minutes after take-off the hijacker brandished a toy gun and walked up to the cockpit door. He requested to talk to the Prime Minister. At 11:39 UTC (17:39 local) the aircraft landed at Chittagong. The aircraft stopped on the main apron and was evacuated. Police and commandos stormed the aircraft and killed the suspect.

Date 26 February (video above)
Aircraft Gulfstream G200 Galaxy
Location Moskva-Sheremetyevo Airport (SVO), Russia
Fatalities Nil
Description After landing, the aircraft slid sideways off the left-hand side of the runway and became stuck in snow. The five occupants—3 passengers and 2 pilots—were not injured. 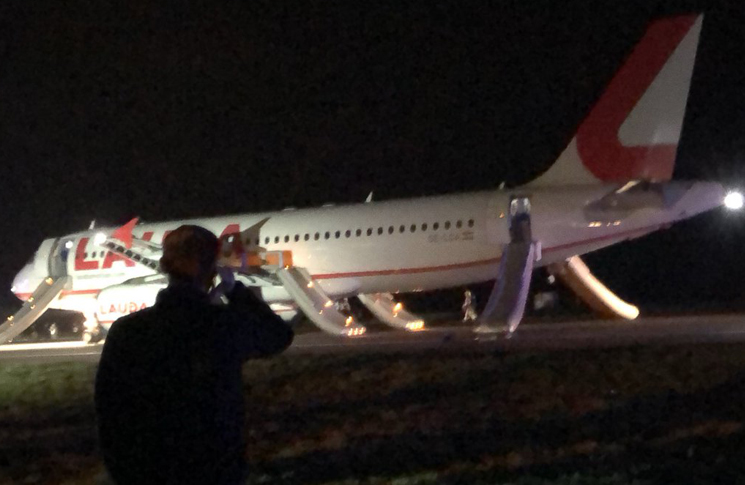 Date 1 March (image above)
Aircraft Airbus A320-214
Location London-Stansted Airport (STN), UK
Fatalities Nil
Description The aircraft rejected the take-off due to an engine failure in the number one engine. The aircraft had commenced the take-off roll when a loud bang was heard and a brief streak of flames was observed from the exhaust of the number one engine. The flight crew aborted the take-off at low speed and an emergency evacuation was performed on the runway. Eight passengers received minor injuries as result of the evacuation. 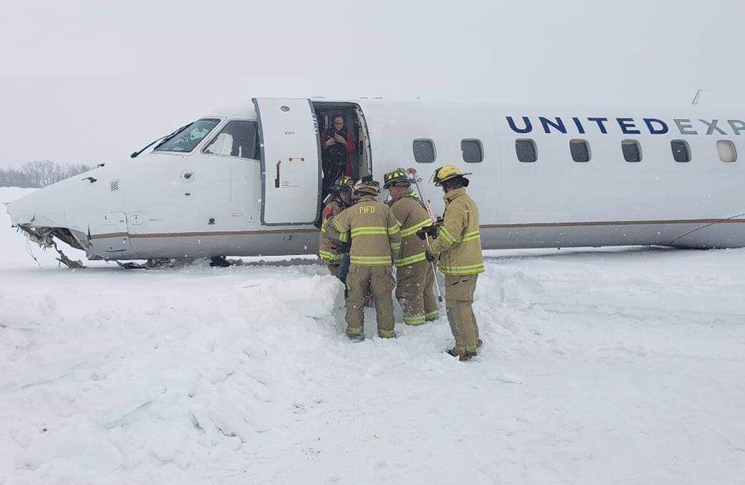 Date 4 March (image above)
Aircraft Embraer ERJ-145XR
Location Presque Isle-Northern Maine Regional Airport, ME (PQI), USA
Fatalities Nil
Description The aircraft landed between runway 01 and taxiway A in moderate snow. It had departed Newark-Liberty International Airport, New Jersey at 10:04 hours local time on a domestic flight and was on final approach to runway 01 at Presque Isle Airport when the flight crew aborted and circled the airport for another attempt. At 11:30 hours, the aircraft landed and one of the undercarriage legs separated and became embedded between the fuselage and the number one engine. The nose section sustained serious damage. One crew member and two passengers were injured. 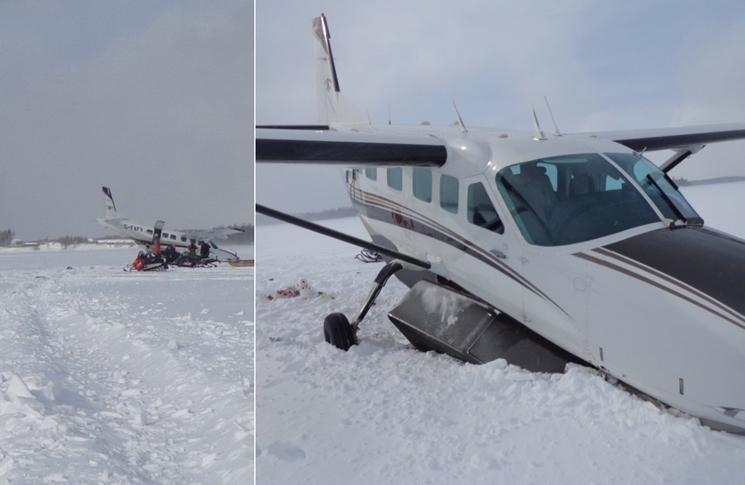 Date 4 March (images above)
Aircraft Cessna 208B Grand Caravan
Location 1.4 km (0.9 mls) S of Little Grand Rapids Airport, MB (ZGR), Canada
Fatalities Nil
Description The aircraft was conducting a VFR flight from Winnipeg/St. Andrews (CYAV) to Little Grand Rapids when on final approach collided with the frozen surface of Family Lake, south of the threshold of the runway. The pilot suffered minor injuries but none of the six passengers were injured. The aircraft sustained substantial damage. 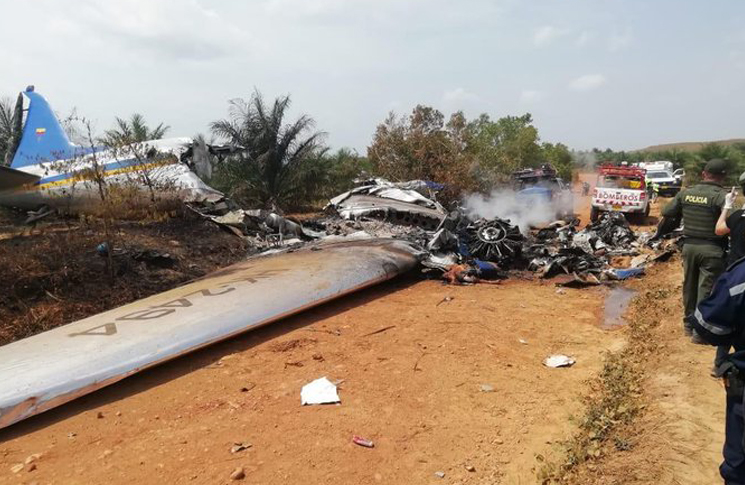 Date 9 March (image above)
Aircraft Douglas DC-3
Location Finca La Bendición, San Martín, Columbia
Fatalities 14
Description The aircraft was on a non-scheduled passenger flight between Taraira Airport (SKTR) and the Villavicencio (SKVV) in Colombia. The aircraft took off with a crew of three, eight passengers and 500 kgs of cargo. Adverse weather conditions were encountered en route and the crew decided to divert to Miraflores (SKMF). Two more passengers then boarded the flight for Villavicencio. The aircraft then took off and flew to San Jose del Guaviare (SKSJ) to refuel. Prior to departure one more passenger boarded the flight. The aircraft took off and as the aircraft was climbing through 8100 feet and approximately 59 nm (109 km) from Villavicencio, the crew reported engine problems and stated their intentions to divert to a nearby airstrip. The aircraft lost altitude and during the last radio contact the crew stated that they had a runway in sight, with no further information. The aircraft hit the ground of a palm plantation with a high angle of descent and low speed. Flaps and undercarriage were retracted at the time of the accident. The aircraft slid across a gravel road and burst into flames. All 14 passengers and crew were killed.

Date 10 March (image above)
Aircraft Boeing 737-8 MAX
Location 50 km (31.3 mls) ESE of Addis Ababa-Bole Airport (ADD), Ethiopia
Fatalities 157
Description The aircraft crashed shortly after taking off from Addis Ababa-Bole Airport, Ethiopia. There were no survivors among the 157 occupants. The aircraft took off from runway 07R at 05:38 UTC (08:38 local time). The airline reports that contact was lost at 08:44 local time. In a press conference the CEO of Ethiopian Airlines stated that the pilot reported difficulties with the aircraft to ATC. He was given clearance to return to the airport. Weather at the time of the accident was fine with a visibility of 10+ km, few clouds at 2500 feet. The investigation is continuing.

Date 10 March
Aircraft Hawker Siddeley HS-125-600A
Location near San Pedro Peralta, Chetumal, Quintana Roo, Mexico
Fatalities 1
Description The aircraft with fake registration sustained substantial damage in an apparent forced landing in a jungle area near San Pedro Peralta, Mexico. One of the two pilots was killed, the other sustained serious injuries. The aircraft was found to be carrying packages of cocaine. At the time of the accident, the registration that was on both sides of the engines was current in the FAA register, but also belonging to a HS-125 jet. The accident aircraft was determined to be a HS-125-600A, msn 256046. This aircraft was registered N299GS until it was cancelled from the U.S. register on Feb 15, 2018 after being sold to Mexico.

Date 19 March
Aircraft Fokker 100
Location Tehran-Mehrabad Airport (THR), Iran
Fatalities Nil
Description The aircraft suffered a failure of one of the hydraulic systems and as a result the main undercarriage could not be lowered. Manual attempts to deploy the undercarriage were also unsuccessful. The flight crew then had to perform a gear-up landing. There were no injuries and there was no fire. Preliminary investigation results show that the aircraft had suffered hydraulic issues on prior flights. 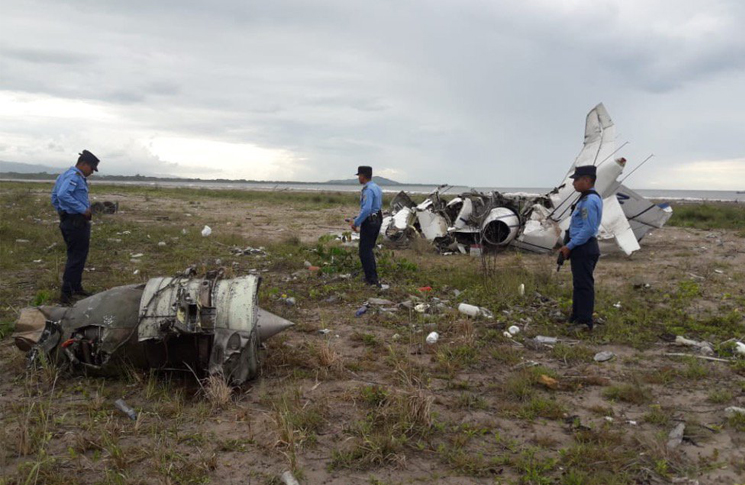 Date 22 March (image above)
Aircraft Rockwell Sabreliner 60
Location ca 14 km E of Bajamar, Honduras
Fatalities Nil
Description The aircraft crashed near an illegal landing strip located close to the beach between Bajamar and Punta Sal, Honduras. In the wreckage a package of cocaine was found, along with a fire arm. On the day before the accident, the aircraft was recorded by flight tracking website Flightaware flying from an airfield at or near Chetumal, Mexico. The last data point shows the aircraft at FL221 over the Caribbean Sea on a heading towards Venezuela or Colombia.

Date 23 March
Aircraft Beechcraft Super King Air
Location Matsieng Aerodrome, Botswana
Fatalities 1
Description The aircraft impacted the ATC tower and club house at the Matsieng Aerodrome. The pilot and sole occupant of the aircraft was killed. It was rumoured that the pilot was involved in a domestic dispute earlier in the afternoon and was an uninvited guest at a function at the Matsieng Flying Club, located next to the ATC tower. The pilot made a number of low-level fly pasts of the club house from different directions. An immediate evacuation of the club was ordered. The final extremely low-level run resulted in an impact with the club house. It was destroyed along with the ATC tower and 13 parked vehicles.