Melbourne commuters could be travelling in a pilotless flying taxi by 2023, and CASA is working with the organisation involved in this ambitious project.

CASA has met Uber Elevate several times to discuss regulatory issues around the use of air taxis and looks forward to continuing to work with them on this exciting initiative.

‘This year Australia became the first country in the world to approve a commercial drone delivery system – Wing – in Canberra,’ Gibson said.

‘Our experience with Wing means we have experience in evaluating innovative ideas and working with operators to ensure that their proposed operations can be done safely.

Gibson said the electric aircraft would be built and certified for commercial use in the US. CASA’s role would be to ensure an appropriate regulatory framework for operations of the new aircraft configuration. ‘We’re aware we will have to face new safety issues, but we’re confident of doing that, and we welcome the Uber Air decision,’ Gibson said.

‘We don’t see anything insurmountable,’ Gibson said. ‘We’ve had quite a few discussions at a fairly detailed level with Uber prior to this announcement and they’ve got a good understanding of what our requirements are. We’re very supportive, but we can assure people we won’t just be ticking off on it.’

‘Safety is our priority and the public should have confidence that we will review any requests from Uber and consider all of the safety and regulatory issues within our remit before providing them with any permissions.’

Uber Elevate has not yet applied for any regulatory permissions for the aircraft or routes they intend to fly – CASA will consider any application when received to ensure that it provides a high level of aviation safety.

Uber intends to use a specially designed vertical take-off and landing (VTOL) aircraft and has partnered with Bell Helicopters, Aurora Flight Sciences (a Boeing company), Pipistrel Aircraft, Embraer, and Mooney to build the vehicles and the necessary infrastructure to support and power them, with each company working on a different design. 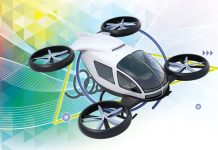