The incident has the makings of a grim hangar joke; an aircraft engine stops because of fuel starvation but, hey, all the passengers have parachutes, which they promptly use. But fuel management, threat and error management, and following published procedures are serious issues, as this incident (in which, luckily, no-one was harmed), shows.

The Australian Transport Safety Bureau (ATSB) has published an occurrence brief about the incident, which involved a Cessna 206, flying parachute drops , near Aldinga, South Australia, on 3 February this year. Occurrence briefs are not investigations, the ATSB emphasises, but ‘concise reports that detail the facts surrounding a transport safety occurrence, as received in the initial notification and any follow-up enquiries’.

There were four parachutists on board, and one pilot. At 1345 Central Daylight Time, the aircraft was passing through 8000 ft on climb when the engine failed. The pilot attempted to restart the engine and switched fuel tanks, but the attempt was unsuccessful.

About 6500 ft, the parachutists ‘exited the aircraft’ and the pilot started to track back towards Aldinga. The pilot was able to restart the engine at 5000 ft and flew a straight in approach to Aldinga.

After landing the right tank was found to be empty while the left tank held 110 litres of fuel. The pilot said that he had probably forgotten to change fuel tanks because he was distracted due to radio calls and high workload.

‘In this instance, selecting the appropriate fuel tank during checks would have avoided the pilot having to manage fuel during a high workload period,’ The ATSB says. ‘This in turn, would reduce the risk of a fuel starvation event.’ 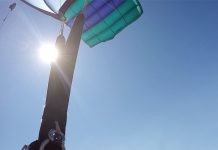