Date 3 May (images above)
Aircraft Boeing 737-81Q (WL)
Location Jacksonville Naval Air Station, FL (NIP), USA
Fatalities Nil
Description The aircraft experienced a runway overrun upon landing and came to rest in the shallow waters of St Johns River, sustaining substantial damage. At the time of landing, a thunderstorm was active in the area. The aircraft touched down at an airspeed of 163 knots with a tailwind of about 15 knots. The ground spoilers deployed three seconds after touchdown. The aircraft was not able to use thrust reversers as the right-hand thrust reverser was inoperative. This was allowed per minimum equipment list (MEL). The 143 passengers and crew survived and there were no reported injuries.

Date 3 May
Aircraft Douglas C-47A-25-DK (DC-3C)
Location 6.5 km (4.1 miles) SE of Hay River Airport, NT (YHY), Canada
Fatalities Nil
Description The aircraft was conducting a cargo flight from Hay River (CYHY) to Yellowknife (CYZF), Canada, with two flight crew on board. During the climb to cruise altitude the number one engine lost complete power. The flight crew elected to return to CYHY, however were unable to maintain altitude. As more power was added to engine number two to maintain airspeed, it started to run rough. The flight crew declared a PAN PAN, subsequently followed by a MAYDAY and made a forced landing south-east of CYHY. The aircraft was substantially damaged, but there was no post-impact fire or injury to either flight crew.

Date 4 May
Aircraft Learjet 45
Location Edinburgh-Turnhouse Airport (EDI), UK
Fatalities Nil
Description The aircraft was conducting a flight from Edinburgh (EGPH), United Kingdom to Reykjavik/Keflavik (BIKF), Iceland with four crew members onboard. During pushback, the nose landing gear collapsed. There were no injuries. The nose landing gear and surrounding airframe structure were damaged.

Date 5 May (image below)
Aircraft Sukhoi Superjet 100-95B
Location Moskva-Sheremetyevo Airport (SVO), Russia
Fatalities 41
Description The aircraft was attempting an emergency landing at Moscow’s Sheremetyevo Airport when it burst into flames killing 41 of the 78 people on board. The aircraft had taken off at 18:03 hours local time on a scheduled service to Murmansk, Russia. As the aircraft was climbing through an altitude of about 8900 ft (2700 m), a failure occurred in the electrical system. The aircraft was 30 km west-northwest of the airport in an area of thunderstorm activity. The captain assumed manual control of the aircraft, but the flight crew were unable to contact the approach controller and subsequently selected the emergency transponder code 7600 (loss of radio communication). About 18:17 the aircraft overshot the runway centreline after turning to the runway heading at an altitude around 2400 ft (731 m). The aircraft continued the right-hand turn, completed a circle and proceeded on the final approach. When descending from 1100 to 900 ft (335 to 275 m) the windshear warning system sounded five times. From a height of 260 ft (80 m), the aircraft descended below the glide path and at a height of 180 ft (55 m) the TAWS warning sounded. The airspeed increased to 170 knots. At 18:30 the aircraft overflew the runway threshold at a distance of 3000 ft (900 m) and touched down at a speed of 158 knots and a g-force of 2.55 g with a subsequent bounce to a height of 2 metres. After two seconds the aircraft landed again on the nose landing gear with a vertical load 5.85 g and bounced to a height of 6 metres. The third landing of the aircraft occurred at a speed of 140 knots with a vertical overload of 5 g. This caused a rupture of the wing structure and fuel lines. Flames erupted and engulfed the rear of the aircraft. The aircraft slid to a stop on the grass between the runway and two taxiways. An emergency evacuation was carried out while flames quickly engulfed the rear fuselage.

Date 5 May (image below)
Aircraft Canadair CL-600-2B16 Challenger 601-3A
Location 257 km (160.6 miles) NW of Monclova, Mexico
Fatalities 13
Description The corporate jet, which was chartered to fly ten passengers to watch a boxing match was reported missing on a flight from Las Vegas to Monterrey, Mexico. At 14:52 the aircraft took off from Las Vegas on the return leg to Monterrey. Flight tracking data shows the aircraft en route at a cruising altitude of FL370. At 18:25 local time the aircraft climbed to FL390, which it maintained for five minutes then climbed towards FL410. The last ADS-B data point recorded by Flightaware was at 18:37 hours at 40,925 feet. The wreckage was found in a remote part of Mexico with no survivors.

Date 7 May
Aircraft de Havilland Canada DHC-6 Twin Otter
Location 57 km (35.6 miles) NNE of Kuujjuarapik Airport, QC (YGW), Canada
Fatalities Nil
Description The aircraft suffered an accident during take-off when one of the skis was caught in the snow. The nose wheel was torn off and the aircraft came to rest outside the surface prepared for take-off. There were no injuries. The nose of the aircraft as well as the left wing, the landing gear, the engine and left propeller all suffered substantial damage.

Date 8 May (image below)
Aircraft de Havilland Canada DHC-8-402Q Dash 8
Location Yangon-Mingaladon Airport (RGN), Myanmar
Fatalities Nil
Description The aircraft suffered an accident during landing. Weather at Yangon was poor due to a thunderstorm in the area. Precise circumstances are unclear, but the aircraft came to rest off the runway. The aircraft fuselage broke just behind the forward-passenger door and just behind the rear service door. The undercarriage collapsed and the right-hand wing broke at the attachment point with the fuselage. There was no fire. All occupants survived, but eleven were reportedly injured. 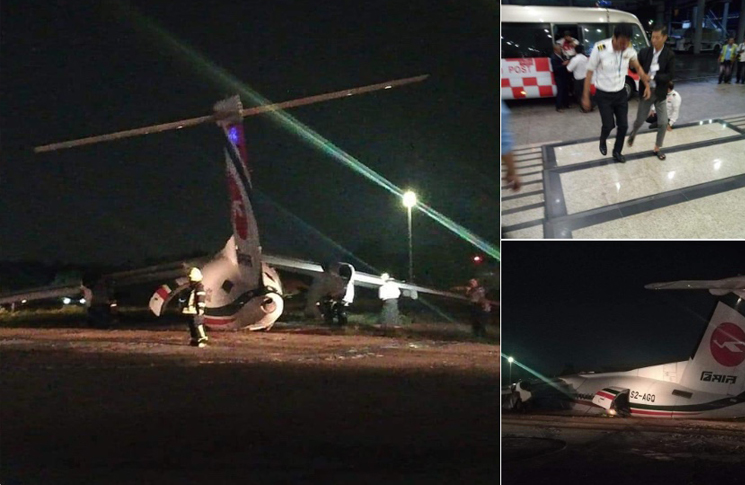 Date 8 May (image below)
Aircraft Antonov An-2R
Location 13 km (8.1 miles) from Uriman Airport (URM), Venezuela
Fatalities Nil
Description The aircraft sustained substantial damage in an accident near Uriman Airport. The aircraft crashed next to a group of trees, severing both left-hand wings. The aircraft came to rest inverted. 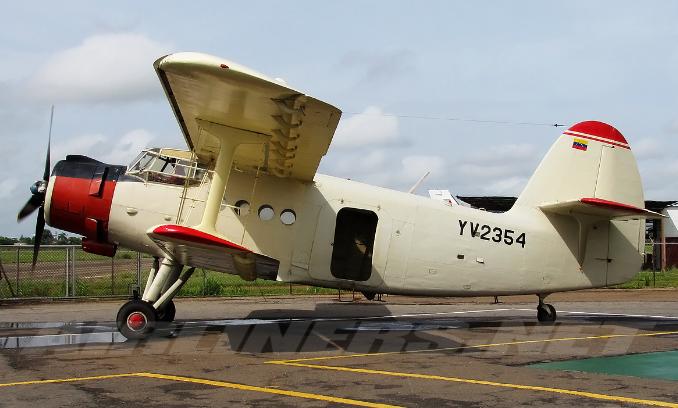 Date 10 May
Aircraft de Havilland Canada DHC-8-311 Dash 8
Location Toronto-Pearson International Airport, ON (YYZ), Canada
Fatalities Nil
Description The aircraft collided with a fuel truck while taxiing to a gate at Toronto Pearson Airport. Five people were injured in the accident. The aircraft departed Toronto on a domestic flight to Sudbury, however visibility at Sudbury was poor, and the flight was unable to land. The flight crew elected to return to Toronto, where a normal landing was made. As the aircraft was taxiing to the gate, it collided with a fuel truck. The aircraft sustained serious damage to the left side of the flight deck. The left-hand rear cargo door was pushed inward, and the number one propeller also suffered damage.

Date 11 May
Aircraft Cessna 208B Grand Caravan
Location Saint-Esprit Aerodrome, QC, Canada
Fatalities Nil
Description The aircraft was on a skydiving flight. Following the drop of parachutists, the pilot returned to the airport and encountered a wind shear on short final. The aircraft lost altitude and the pilot was not able to slow the descent. It collided heavily with the ground. The wheel of the nose collapsed, and the propeller contacted the ground. The pilot and the passenger on board were not injured.

Date 13 May
Aircraft de Havilland Canada DHC-3T Vazar Turbine Otter
Location 15 km (9.4 miles) NE of Ketchikan, Alaska, USA
Fatalities 6
Description A float-equipped DHC-3 Turbine Otter and a float-equipped DHC-2 Beaver collided in mid-air, about 7 miles (11 km) northeast of Ketchikan. The five occupants of the DHC-2 were killed. The DHC-3 pilot sustained minor injuries, nine passengers sustained serious injuries and one passenger was killed. Preliminary flight track data revealed the DHC-3 was travelling southwest about 3700 ft mean sea level (MSL) and gradually descending at 126 knots when it crossed the east side of George Inlet. The DHC-2 was travelling west-southwest about 3350 ft MSL at 107 knots when it crossed the east side of the inlet. The aeroplanes collided about 3350 ft near the west side of the inlet, east of Mahoney Lake. The DHC-3 pilot stated that the flight from the Misty Fjords area had proceeded normally, and he had descended and was manoeuvring the aircraft to show passengers a waterfall near Mahoney Lake when the collision occurred. Just prior to the collision, he saw a flash from his left side and experienced a large, loud impact. According to the pilot, the DHC-3 aircraft then rolled right and pitched about 40 degrees nose-down towards the water. The pilot was able to maintain some control and flare the aircraft prior to impact. The pilot, some passengers and some bystanders helped the passengers of the DHC-3 evacuate the aircraft and move to the shore. The DHC-3 main wreckage came to rest 24 metres (80 ft) underwater about 120 metres (400 ft) off the east shore of George Inlet. The DHC-2 aircraft broke up in flight after the collision, and the wreckage was scattered over water and mountainous terrain northeast of Mahoney Lake on the west shore of George Inlet. 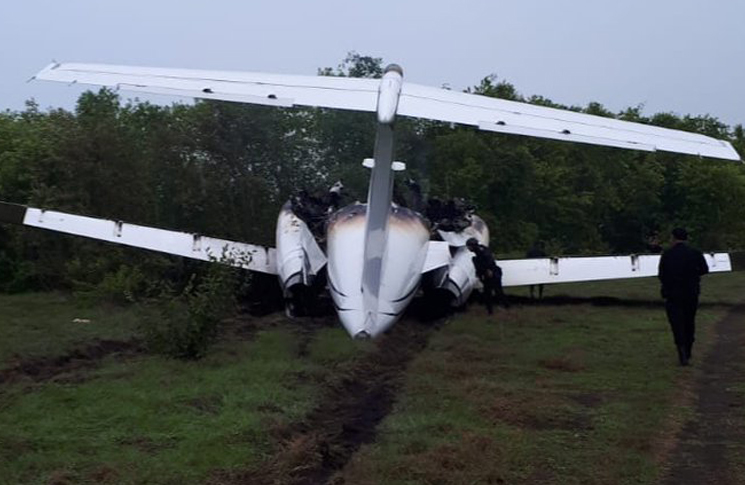 Date 22 May (image below)
Aircraft Antonov An-2
Location Zhuravskoye, Russia
Fatalities Nil
Description The aircraft suffered a runway excursion when it failed to lift off the runway during take-off at the collective farm near Zhuravskoye. The aircraft came to rest in trees. 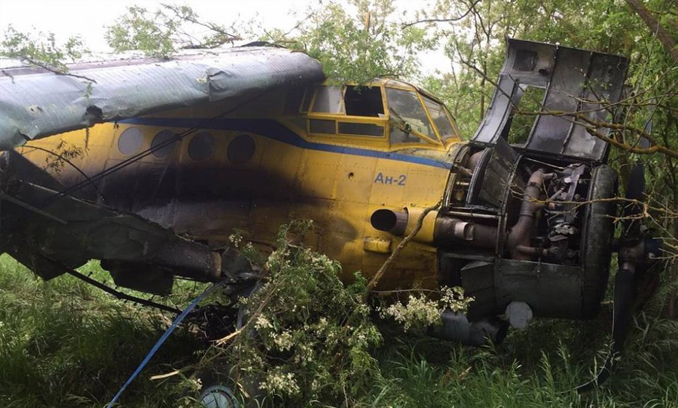 Date 24 May
Aircraft Cessna 560 Citation Encore
Location 480 km (300 miles) east off Fort Lauderdale, Florida, USA (Atlantic Ocean)
Fatalities 1
Description The aircraft ditched into the Atlantic Ocean east of Fort Lauderdale. There was one pilot on board. The aircraft departed St. Louis Regional Airport, Illinois, USA at 18:36 UTC (13:36 local time) on a flight to Fort Lauderdale-Executive Airport, Florida, USA (KFXE). The aircraft climbed to the cruising altitude of FL390. At some point in the flight ATC communication with the aircraft was lost. At 20:52 UTC the flight passed overhead KFXE at FL390, continuing on a heading of roughly 080 over the Atlantic Ocean. The aircraft was intercepted by two Homestead AFRES F-15’s shortly before it went down into the sea at about 21:47 UTC.