Home From the vault Patching the wings of time

The warbird movement has been dealing with ageing aircraft issues for decades. Along the way, its operators have learned a few things about how to keep classic types in the air.

If there’s one thing that unites incurable aeronautical romantics with the rest of humanity it’s the sight and sound of a Spitfire.

The curve of the elliptical wing, the noble baritone of the Rolls-Royce Merlin, the stirring associations with sacrifice and freedom: all good reasons to go to Temora, in NSW, to see the two flying Spitfires in Australia.

What’s not so obvious is that there’s another, practical, reason to be grateful for the Spitfire, and the warbird movement at large. In the 21st century, both are directly relevant to the mass of non-heroic general aviation. The knowledge, tricks and hard-won lessons that keep Spitfires in the sky are relevant to any operator of an ageing aircraft.

Lesson 1: Cheap to buy can mean costly to fly

Aviation classifieds are full of temptation, in the form of aircraft that cost little more than a prestige car but offer abilities no automobile can match. If only it were that simple – and cheap. Temora Aviation Museum chief engineer Andrew Bishop says the same temptations haunt the warbird market, where jet trainers are, on first glance, attractively inexpensive. Let the buyer beware that purchase price is no more than a cover charge for admission to an expensive club, he says.

‘The purchase price reflects ongoing maintenance costs. You especially see it with warbird jets. It’s like a ticket to the movies. That’s the cheap part, but when you buy the choc-top and the popcorn, that’s where it stings you.’

Love says long-running civil types such as the Beechcraft Baron illustrate the ageing aircraft dilemma well. ‘It’s still in production and, currently, costs around a million dollars. You can get one made in the 1970s for $180,000 or $200,000. Although that sounds like quite a bargain, what you have to remember is that the spare parts schedules are set around that million-dollar price point. You’re going to be paying a higher labour rate but you’re maintaining an older aeroplane.

All else being equal, the newer the aeroplane you can buy the better, says Love.

Lesson 2: Anything is possible – for a price

For warbirds that represent the struggles of an entire country, cost is not the obstacle it might be for an individual owner.

That is the sort of provenance that opens purse strings. The BBMF operates a unique variant of the Lancaster bomber, the only one of the more than 7000 made to have had its main spars replaced.

It was no small job. In 1996/97 the wing centre section forward and rear, upper and lower spars were replaced, together with those making up the outer wing forward upper and lower and rear lower sections. In 2004/05 the fins were stripped and re-sparred and it is planned that in 2015/16 the tailplane spars will be replaced.

‘With current fatigue consumption rates it is not envisaged that the wing spars will need replacing until approximately 2028’, Ball says.

Aeroplanes are like people. Although all need maintenance as they grow older, some are high-maintenance by temperament, and some are easy-going low-maintenance types.

Two near-contemporary jets based at Temora illustrate the contrast. The museum’s Gloster Meteor is a robust simple aircraft with no ‘magic metal’ advanced alloys in its airframe, engines or systems. Its single-stage centrifugal flow Rolls-Royce Derwent turbojets are inefficient but low stressed – they can be fitted with wire inlet screens to prevent foreign object damage.

In contrast, the Meteor’s near contemporary, the CA-27 Avon Sabre (on loan to Temora from the RAAF Museum) is a more demanding aircraft to keep airworthy. The Avon, powered by a Rolls-Royce Avon turbojet, is an ‘orphan’ aircraft. Only 112 were made, compared with 9748 Sabres powered by the significantly less-powerful General Electric J47 engine. It has limited documentation, in comparison with the mainstream Sabre and significant differences in airframe construction. Its sub-systems are complex by comparison with the Meteor’s. The active support of the RAAF Museum, as a connection to the original operator, is essential to keep the Sabre airworthy.

Bishop and Love say the general lesson for civil aircraft operators is to know your aircraft: research any proposed buy, or analyse what you already own. Simple, popular, and widely supported are the words that tick boxes here.

Lesson 4: Aircraft should act their age

‘We do make concessions in that we now operate aircraft in quite a small area of their designed flight envelope’, says Kev Ball. All aircraft in the BBMF have limits on flying hours, G-loads, engine boost and all-up weight.

‘These limits are significantly lower than those which would be experienced during the aircraft’s normal operating life cycles,” Ball says.

‘For the Lancaster we rarely fly with more than 1000 gallons (4540 litres) of fuel on board (2154 gallons / 9782 litres is the capacity) with a general guideline that we fly with the lowest weight possible while allowing for enough fuel to conduct the planned task with a suitable reserve. ‘

Other life-extending practices include starting the engine and taking off as soon as possible to avoid overheating, particularly on the heat-prone Mk II and V Spitfires, pre-oiling the engines prior to start to reduce wear and operating the undercarriage on the Lancaster only in straight and level flight, in order to reduce stresses.

BBMF flying hours are limited to about 200 hours for the Spitfires, 180 for the Dakota, 120 for the Hurricanes and 100 for the Lancaster.

Temora hours are lower again. Their Spitfires log about 10 hours each every year, made up of about 30 flights each. Small aircraft, such as the Ryan, which rarely flies away from its home airport, may only do six or seven hours a year. The highest utilisation is the museum’s Lockeed Hudson bomber, which logs up to 20 hours.

Lesson 5: Technology is your aircraft’s friend

‘As aircraft get older you have to be more proactive’, says Bishop. ‘We need to change our focus to the parts of the aeroplane that we can’t see.’

The Temora Spitfires use Australian-made Perkins flight data recorders that hour-by- hour build up a picture of engine, systems and airframe use and condition

The Perkins boxes pay for themselves by giving advance warning of problems, Bishop says.

‘It gives us great trend monitoring because it’s factual. We can say “two years ago on a similar flight these were the figures we were seeing”.’

Temora’s Spitfires have been retrofitted with modern full-flow oil filtration, which Merlins fitted to Spitfires never had. ‘We also use SOAP (spectrographic oil analysis program) analysis of the oil,’ Bishop says. ‘It can show us whether we’re starting to see metal (in the oil) and what type of metal it is, moisture content and whether it’s becoming acidic. We can catch things in the early stages.’

Non-destructive testing is a major part of Temora’s airworthiness regime, and includes fluorescent dye penetrant testing done in house, and and X-ray and eddy current inspections that are contracted out.

‘As metals age surface corrosion is not your only enemy, says Bishop. ‘We’re starting to find intergranular corrosion which is not always evident to the naked eye.

Technologies change, you need to embrace them and use everything that can help.’

However, there is also an important place for an old-fashioned technology – paper and ink. Warrant Officer Ball says the BBMF archives all its airworthiness paperwork.   ‘Records have been kept that in some cases goes back to the war years.’ Likewise, Temora maintains an extensive library of maintenance documents, including manuals, pilot’s operating handbooks, and course notes.

‘Our library is a global one,’ says Bishop. ‘We share it with the rest of the warbird community and they share theirs with us.

‘All this information has been around for the past 70-odd years but today we’re seeing it being gathered up, scanned, put on CD-ROM, accessible on the internet and shared across the world.

‘If we want to talk to BBMF about maintenance on their Spitfires we can do that. They are the equivalent of a workshop next door. Smartphones for sending pictures are a very useful tool. They give us the ability to say “have you got this part?” or “have you seen this?”’

The internet has other uses. ‘We are under the warbird, experimental and limited category and are able to use more in the way of salvaged parts without history – so, buying parts from eBay happens,’ says Bishop. (This, of course, is not an option for general aviation aircraft).

‘Obviously, they go through very stringent inspection and test criteria before fitment. Not all measure up – life is full of disappointments in the old airplane world.’

Temora Museum director Kenny Love says that the basic concepts of maintaining an ageing aircraft are simple, but need to be consistently applied.

‘You need to know your airplane; you need to know it back to front. On a deeper level you, or your engineering company, need to understand what the aircraft is made of – what the materials are, what their life span is.

‘You need to be in tune with other operators. Look out there and see what other problems people are finding.

The last word should perhaps go to the designer of the Spitfire, R. J. Mitchell, who, long before the aircraft became an icon, told test pilot Jeffrey Quill: “If anybody ever tells you anything about an aeroplane that is so bloody complicated you can’t understand it, take it from me: it’s all balls”.’

Note: Personnel and positions may have changed since this story was first published 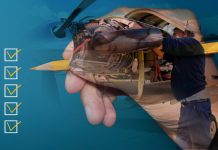