Football player Emiliano Sala had a high level of carbon monoxide in his blood before the aircraft he was travelling in crashed, the United Kingdom Air Accidents investigation Branch (AAIB) has said in a special bulletin.

Sala and pilot David Ibbotson, 59, were on a Piper PA-46 Malibu that crashed into the English Channel on 21 January this year on a flight from Nantes in France to Cardiff, Wales, where the 28-year-old player was to start with a new team. Sala’s remains were recovered from the submerged wreckage in February.

‘Toxicology tests on the blood of the passenger showed a carboxyhaemoglobin (COHb) saturation level of 58 per cent,’ the AAIB bulletin said. ‘COHb is the combination product of carbon monoxide (CO) with haemoglobin, the oxygen-carrying protein molecule contained in red blood cells.’

Carbon monoxide is a colourless, odourless gas produced from the incomplete combustion of carbon‑containing materials including coal, petrol, avgas and jet fuel. It readily combines with haemoglobin in the blood, displacing oxygen and causing incapacitation, unconsciousness and death through a form of hypoxia. Like altitude related hypoxia, its onset is gradual and insidious. It is a long-standing hazard in general aviation aircraft, particularly in winter flying, when it can enter the cabin through a malfunctioning heating system.

The AAIB bulletin said a COHb level of 50 or above in an otherwise healthy individual was generally considered to be potentially fatal. And since the Piper Malibu had no partition between the cockpit and the cabin, it was likely that the pilot was also ‘affected to some extent by exposure to CO’.

The FAA has a leaflet, ‘Carbon Monoxide: A Deadly Menace’, which lays out the actions a pilot should take if the presence of CO is suspected: 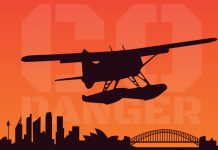