As bushfires continue to ravage large areas of Australia, general aviation pilots are being warned to keep away from dangerous pyrocumulonimbus clouds.

Airlines are also being cautious, cancelling some flights to towns on the NSW south coast where numerous bushfires are burning.

Pyrocumulus clouds form when intensely heated air from bushfires rises into the sky and cools. Condensation from existing atmospheric moisture and moisture evaporated from burnt vegetation, then combine with ash particles.

The Bureau of Meteorology says bushfires can create their own weather. ‘[Pyrocumulonimbus clouds] are a thunderstorm that forms in the smoke plume of a fire (or nuclear bomb blast or volcanic ash cloud),’ the bureau says. ‘In Australia, they most commonly form in large and intense bushfire smoke plumes.

‘As the plume rises to higher and higher elevations, the atmospheric pressure reduces, causing the plume air to expand and cool … If it cools enough, the moisture in the plume air will condense and forms cumulus cloud which, because it comes from the fire plume, we call “pyrocumulus”.

‘Further expansion and cooling cause more moisture to condense and the cloud air to accelerate upwards even more … Having produced a thunderstorm, the cloud is now known as “pyrocumulonimbus”.’

Aviation Safety Advisor Craig Peterson, an experienced pilot, says weather radar on aircraft may not detect fire-generated turbulence because it is not always associated with high levels of water and the radars typically do not detect small ash particles.

‘Turbulence in and near pyrocumulus clouds can effectively be like clear air turbulence,’ he says.

While GA pilots would be aware of the turbulence and reduced visibility associated with pyrocumulus clouds, they may not be aware of other hazards, Peterson says.

‘If you do fly near them, you are likely to encounter the firebombing aircraft and their spotters,’ he says. ‘People forget those aircraft might be operating in the vicinity of pyrocumulus for water bombing operations.

‘The other danger that a lot of people don’t realise is that fires attract birds. The fire disturbs insects, so you get clouds of insects airborne and the birds come to feed on them. So, close to a pyrocumulus cloud, you’re typically going to see a lot of bird activity as well which presents a hazard for aircraft.’

He says pyrocumulonimbus clouds can be difficult to see through smoke haze. ‘It’s a bit like what we call embedded thunderstorms—the cumuliform cloud associated with the thunderstorm, or in this case the fire, can actually be embedded in poor visibility due to smoke haze,’ he says.

‘So if a pilot was flying along in nice blue skies and they saw a big pyrocumulus in front of them, they would avoid it because they know it’s got to have turbulence in it, they don’t have to use the weather radar to know that. However, if they are flying in hazy poor visibility conditions and can’t see ahead, the pyrocumulus could be sitting in all that murk and they just go straight into it because the weather radar may not tell them it’s there.’ 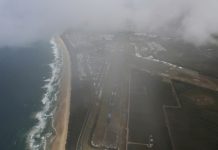