The total impact on Australian homes, people, flora and fauna from this Summer’s bushfires will not be known for some time. However, research conducted by the Queensland University of Technology (QUT) to predict and protect koala habitat could prove vital to help assess and monitor populations and areas that need to be protected for future conservation.

The Research Engineering Facility team from QUT, which holds a remotely piloted aircraft operator’s certificate (ReOC), uses an infrared camera on the drone to pick up the heat signature of the koala, despite the canopy coverage of the trees.

The researchers have developed this innovative method for monitoring koala populations that is proving more accurate, quicker and cheaper than covering the same area with human spotters.

During the test phase, the drones have been used in parts of Brisbane, south-east Queensland and northern New South Wales to develop a model that could be used to identify areas most likely to be home to koalas.

The person responsible for keeping the QUT drones flying is maintenance controller Gavin Broadbent. And he has an interesting backstory.

His father introduced him to model aircraft. ‘It all started out very basic but later it went through to me representing Australia in aerobatics at the world championships,’ he says.

In fact, he went on to rate in the world’s top 30 for FAI precision aerobatics and RC helicopters.

Now his job title is Senior design and RPAS technician, responsible for maintenance and airworthiness of the university’s fleet of 30 machines. ‘I do a lot of the design and integration of components, particularly [attaching] sensors to drones, cars and full-sized aircraft,’ he says.

Gavin holds a remote pilot licence (RePL) and has been flying drones for about 12 years, clocking up about 250 hours flight time. He also did a stint in Thailand, piloting large UAVs for a naval research project.

The main use of drones at QUT is for data collection, such as image data or infrared or heat-sensitive data for wildlife projects. ‘We’ve done 113 different types of data collection with drones at QUT, from sampling air from truck exhausts next to motorways to aerosols and coral bleaching on the Great Barrier Reef,’ Gavin says.

He says discipline needs to the highest priority for safe drone flying. ‘You have to be disciplined to follow the regulations and understand the limitations for your drone,’ he says. ‘You must also understand your equipment and learn what all the functions are. For example, you have to understand what the drone will do in a fail-safe situation, so you’re never surprised by what happens—that’s the worst thing that can happen if it catches you out or you don’t understand what it’s doing, so understanding the system is key.’

Knowing where you can’t fly your drone is important. ‘You can find information online from CASA,’ he says. ‘You can download some very good apps that have the restricted areas listed. And a lot of new equipment now, particularly from DJI, has geo-fences and flight restrictions in certain areas.’

One of Gavin’s most interesting assignments was security at the Gold Coast Commonwealth Games. ‘The most important person I’ve had in the drone camera lens was Prince Charles,’ he says. ‘And probably the most important flight I’ve done was watching over the motorcade of Prime Minister Malcolm Turnbull and Prince Charles when they visited the athletes’ village.’ 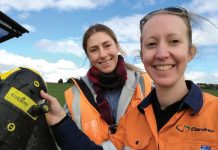 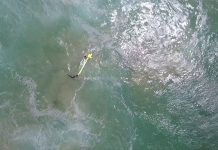 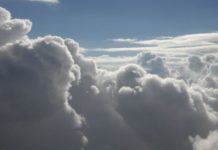