Let’s be honest—the Covid-19 pandemic has changed the face of aviation as we normally know it.

With domestic and international passenger flights all but grounded, there’s been (and still is) a flux of repatriation flights for stranded passengers, which are creating some unusual routes across the globe.

And these flights are bringing in some airlines that have not been seen on our shores for a very long time, if at all.

Austrian Airlines—which hasn’t flown to Australia since 2006—recently made its longest chartered flight in history, flying 16,000 kilometres from Vienna to Sydney with no loading stop. With regular stopover cities such as Hong Kong and Singapore shut down due to coronavirus, the Boeing 777 flew direct to Australia in just over 17 hours.

There have been a few other interesting airlines visiting us for the first time, including German low-cost carrier Condor Airlines. It flew four 767s to Perth via Phuket to pick up tourists who had been stuck on the cruise ship MV Artania in Fremantle.

Israeli airline El Al also made its first Australian appearance, flying a Boeing 787-9 from Tel Aviv to Melbourne in 17 hours and 40 minutes. Nepal Airlines, LOT Polish Airlines and Switzerland’s Edelweiss Airlines have also taken to our skies to repatriate their citizens.

A KLM signature turquoise-blue Boeing 777-200ER was also a sight to behold in our skies. The airline made a rare presence in Sydney, ferrying almost 2000 Dutch travellers back to Amsterdam and marking the first time KLM has flown to our harbour city in 20 years.

CASA’s International Operations team has been working diligently through this unusual situation to enable these flights to cross into our borders.

Manager Grant Hamilton says team members have been working extended hours, seven days a week, with twice-daily online/phone meetings with the Department of Infrastructure, Department of Foreign Affairs and Trade and Home Affairs Transport Security to ensure the entry of these flights is done within Australian regulations.

‘These airlines have all been required to apply for a non-scheduled flight permission, as they are operators of foreign-registered aircraft that are undertaking non-scheduled (charter) flights into our airspace and territory,’ he says.

‘A non-scheduled flight is not made under the authority of an International Airline Licence and includes, but is not limited to, operations such as charter flights, overflights and, in this case, passenger and cargo services.

‘We’ve probably never been busier and to do it all from home over the phone has certainly been a challenge! It’s likely we’ll never see such unusual routes or these airlines here again, so to be honest, it’s all been very interesting.”

Late last month, our own national carrier Qantas also briefly created its own brand-new (but temporary) itinerary, connecting Sydney to London via Darwin.

The ‘Kangaroo Route’ usually makes a fuel stop in Singapore but, as borders are now closed on the island hub, the Flying Kangaroo routed an A380 through the Top End before continuing the almost 17-hour journey to the United Kingdom. 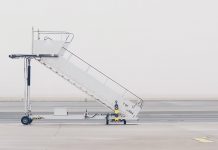