Summer is officially nearly two months away, but drones are already proving their worth in detecting sharks near Australian beaches.

Wilkinson was paddling his board near Sharpes Beach on Wednesday when a shark swam close behind him.

‘I heard a splash and a noise and looked around and couldn’t see anything,’ he told Surf Lifesaving NSW.

Surf lifesavers operating a drone overhead gave a spoken a warning from the aircraft’s speakers.

‘The drone came down and told me that there was a dangerous shark in the area, return to the beach,’ Wilkinson said.

‘I got to the shore feeling a bit weird and the lifeguards showed me the footage and I realised how close it came without knowing it was there. It looks like it’s going for my leg and it’s changed its mind.’

The drone operator, Beau Monks from the Australian UAV Service, said he had just launched his seventh flight for the day when he spotted the shark near the surfer.

‘It sort of came out of nowhere, then went right up to Matt,’ Monks said. ‘It moved pretty fast. I was tracking it and notified the lifeguards and used the speaker on the drone to get everyone out of the water. Within 10 seconds, it was at the surfer and five seconds later it was gone.’

One program is funded through the $8 million NSW Government Shark Management Strategy. This program provides patrol surveillance at 34 locations for improved beach safety and to gather data and footage on shark behaviours

‘Drones are the future of aerial surveillance – they have proven themselves to be cheaper and more effective than helicopters and are preferred by the community,’ Surf Life Saving NSW chief executive Steve Pearce said. 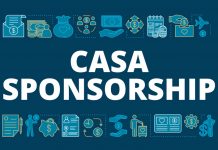