It was a YouTube video captured in a French forest that first caught the eye of Henry Corbell, a young tech enthusiast from Canberra.

The footage depicted three drones pursuing each other, twisting and turning, darting between trees at high speeds, often only one or two metres off the ground*. Henry had always been interested in remote control aeroplanes and cars, but this was like nothing he’d seen before.

What he was watching was first person view (FPV) drone flying, which makes use of a live video transmission where the operator flies the drone using an onboard camera that relays live video to goggles, a mobile phone or a tablet screen.

Henry was instantly hooked – the footage reminding him of a pod racing scene from Star Wars. ‘I knew I wanted to try it,’ Henry says. ‘I did some research and figured out how to build one.’

FPV racing drones differ from ‘ready to fly’ store-bought drones in that they’re typically home built, made from manufactured components.

‘Manufacturers are making components smaller, which makes it safer because there’s less weight and less mass,’ Henry says. ‘The biggest thing that’s come out of [the technology] is digital high-definition video, which is also making it a lot safer because you have more clarity in what you can see.’

In Australia, you must keep your drone within your visual line-of-sight, and always be able to see the drone with your own eyes rather than through a device or a screen. However, for Henry, the FPV aspect was a huge part of the appeal.

‘It didn’t really look that fun to just fly a drone up, take a photo and land it. It’s more exciting to fly around fast and close to the ground – that’s what drew me into it – it’s a very immersive way of flying. You’re wearing the goggles, so it feels like you’re sitting in the cockpit.’

Recreational drone flyers in Australia can fly FPV if they join a model aircraft association that has CASA approval for FPV operations.

To fly FPV, Henry joined the Canberra Multirotor Racing Club which has about 30 official participants and over 600 Facebook page members. They meet monthly for races and typically host a championship once a year. They’re competitive yet friendly environments with a sense of camaraderie.

‘It’s a really cool community,’ says Henry, who is the club’s current president. ‘Everyone’s trying to win, but if you crash, there’s always someone who’s willing to take a spare part off their drone [and put it on yours] so you can keep racing.  It’s healthy competition … and I’ve never seen anyone cheat in a race!’

Safety measures are also carefully considered and adhered to at all club races and events.

‘We string up a net at the flight line and pit area to protect pilots and spectators,’ Henry says. ‘We have multiple spotters for every race [and] keep an eye on the track for members of the public who may wander into the flight area. [We] ensure [the drone pilots] can see clearly through their goggles at all times.’

Being a club member has afforded Henry some valuable opportunities. He has travelled around Australia to different events, like the Edinburgh Air Show in Adelaide in 2019. ‘Flying in the tent with big jets flying over at the same time was the coolest thing ever.’

Beyond recreational flying, he has also turned his passion into a career, working at a company that services and maintains drones for defence and police in Australia and New Zealand.

When asked for his top safety tips for recreational flyers, Henry tells a cautionary tale. ‘Always test the failsafe or the return to home before you take-off to avoid a dangerous situation,’ he says. ‘I’ve seen someone fail to do it, and [the drone] just took off and they never found it. ‘It’s probably still in a tree somewhere!’

*In Australia, these kinds of operations would require approval from CASA. 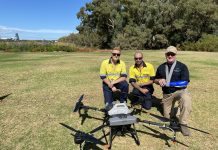 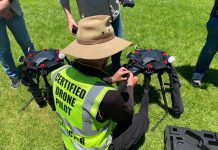