Adam travels extensively along the West Australian coastline, just waiting for the right moment to get that perfect shot.

‘I was always heavily into photography and then a good friend of mine bought a drone – I’d never seen one before and I was totally amazed by it,’ he says.

‘So, when I went to buy a new lens for my Nikon camera, I walked out with a DJI Mavic Air instead! From there I just became addicted and I enrolled myself into a remote pilot licence (RePL) course – which I didn’t need to do  – but I was just so enthusiastic about flying and that’s actually now led to some commercial work.

‘Using a drone just opens up a whole new world and it changes your perspectives because the light comes in from all different angles. You’re also using a wide-angle lens so it’s also all panoramic.

‘I moved on very quickly to using an iPad for the screen rather than a phone. When we go shark spotting, the iPad gives you a lot more real estate and clarity. I’ve also invested in a DJI advanced controller with integrated LCD which reduces set-up and fly time considerably and stops annoying intermittent loss of image from bad connection on cables.’

Adam admits that using the drone has made him a more skilled photographer.

‘I’m also a lot better at manual shooting because you’re changing your aperture and ISO on the fly, while you’re moving and manoeuvring around,’ he says.

‘I also think my RePL training was so invaluable when I’ve had to convert back to manual flying. I’ve been able to use those skills so, if I lose that connection with my drone, I can fly it back without relying on the iPad.’

Adam is a firm believer that a courteous and conscientious drone operator is a safe operator.

‘Late in the year, a large school of now critically endangered scalloped hammerheads and bronze whalers swim near the shore in the Rockingham area,’ he says. ‘It’s a massive attraction for divers and drone pilots alike – a lot of drone pilots converge there to take photos.

‘There’s a lot of money in the air flying at the same time so we communicate really well with another so we don’t get in each other’s way.

‘It’s really simple just to follow the basic CASA rules and I really recommend that you always do your flight checks!’ 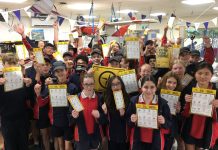