Did you know that water can exist as a liquid below freezing point (0°C)? Water in this state is known as supercooled liquid water (SLW) and is a well-known problem for aircraft. When an aircraft flying in sub-zero temperatures encounters SLW the result is ice build-up, particularly on the leading edges of the wings and tail. This ice formation changes the shape and therefore the flying characteristics of the aircraft, increasing drag and lowering the angle of attack (AOA) that will stall the aircraft.

In order to prevent this, aircraft have ice protection systems installed, which either remove ice build-up (de-icing) or prevent it (anti-icing). Transport category aircraft generally use hot bleed air from the engines to heat up the outer surfaces of the wings, tailplane and engine inlets; smaller aircraft use de-icing systems such as inflatable leading-edge boots, and alcohol sprays.

Ice formation is also a problem for the pitot static system, a flight-critical system that gives an aircraft information on its airspeed, altitude and vertical speed. The pitot static system is generally de-iced using electrically generated heat on any critical components that have the potential for ice to form on them.

The aircraft communication addressing and reporting system (ACARS) gives an aircraft real-time data communication between it and ground personnel. It was initially designed to report the aircraft’s OOOI (out of the gate, off the ground, on the ground, in the gate) status, due to airlines suspecting flight crews were misreporting this information for financial benefit. The ACARS has since evolved to work with the highly integrated digital systems of today’s aircraft.

Airliners can update the aircraft’s FMS (flight management system) information and change flight routes through the system, as well as receive reports on the health of different components on board the aircraft, allowing early diagnosis of potential safety issues. The system is even being used to gather weather information, which is then sent via the ACARS to inform weather bureaux of local conditions and help increase the accuracy of their weather forecasts.

Ejection seats have come a long way since 1916, when one Everard Calthrop patented an ejection seat that used compressed air. However, it wasn’t until the arrival of the jet engine and the dramatic increase in aircraft speed that there was any need for explosive-powered ejection seats, as manually escaping an aircraft at the speed of sound became impossible. During World War II, Britain, Germany, and even neutral Sweden, pursued independent ejection seat development programs.

Modern-day rocket-powered ejection seats can sense airspeed, attitude and altitude, allowing parachute deployments to minimise the forces on the occupant. Early designs often caused significant back injuries to pilots but newer seats have reduced the injury rate to about one per cent of ejections.

According to seat manufacturer Martin-Baker, its ejection seats have saved 7444 lives (increasing to 7446 by the time of publishing). Perhaps the most famous person to be saved by an ejection seat is Neil Armstrong, the first man on the moon, who ejected from a lunar lander training vehicle the year before he took those famous first steps.

ELTs, also known in marine form as emergency position-indicating radio beacons (EPIRBs) are tracking transmitters that can be activated by people in distress, or automatically, if the aircraft crashes. For aircraft flying over water ELTs have become essential safety-critical equipment, and under CASA regulations most aircraft are also required to carry an ELT in flight.

How do you get hundreds of people off a two-storey aircraft quickly and safely? Large inflatable slides of course. Developed by James F. Boyle, the same man who invented the ‘Mae West’ inflatable life vest in World War II, modern evacuation units come in many variations and sizes, as this video demonstrates. Regulations require them to deploy in under ten seconds, with the rapid inflation achieved by a pressurised mixture of carbon dioxide and nitrogen.

This technology does not come cheap. Repacking a deployed slide costs roughly $US20,000, and IATA estimates that accidental slide deployment, which occurs when an aircraft door is opened without being disarmed, costs the aviation industry millions each year.

In the extremely rare event of a crash, getting passengers off the plane is a critical logistical challenge. This was highlighted in a 1991 collision between a Boeing 737 and a Metroliner on the runway of Los Angeles International Airport. Not one passenger on the 737 died as a result of the collision. However 20 passengers still perished from smoke inhalation and burns, with half dying in a queue as they waited to use the right over-wing exit.

The International Civil Aviation Organisation (ICAO) requires the evacuation of passenger aircraft to be completed in less than 90 seconds, using only half the exits, to ensure that an incident similar to the LA one does not happen again. With the introduction of new aircraft, rigorous testing is carried out to ensure that the 90-second standard is maintained.

This was the case with the Airbus A380, which before it could be certified underwent trial evacuations to ensure that all the 873 people on board were able to leave the aircraft and reach the ground in time.

The design standards cover fixed-wing aircraft and rotorcraft for both private use and public transport. Any aircraft seeking FAR certification must go through a rigorous process in order to prove to the FAA that it meets the rigorous safety requirements set out in these design standards. The European Joint Aviation Requirements are another set of standards, applicable to European-designed aircraft.

For obvious reasons, fuel bladder technology came to prominence during World War II. Self-sealing tanks used multiple layers of rubber compound that encased the outer shell of the tank. By 1942 the first flexible fuel bladders were being used as range extenders on the MkIX Spitfire, with combat experience showing that aircraft with self-sealing tanks were able to sustain much more damage than those without.

Bullets are,obviously, less of a hazard in  civil aviation but the same  technology also makes bladder tanks  impact resistant, which lessens the chances of a fuel-fed post impact fire.  Bladder tanks are now used on many fixed and rotary-wing general aviation aircraft.  In 2013, CASA mandated the retrofitting of bladder fuel tanks on Robinson R44 helicopters after a series of post-crash fires, and, as this incident shows, the intervention has already proved vital in preventing post-crash fires.

First invented in World War I, and in widespread use by the 1930s, flaps allow an aircraft to increase the lift generated by its wings by increasing either the camber (curvature) or total wing area (and sometimes both.). This increase in lift reduces the stall speed and allows the aircraft to fly safely at lower speeds than usual. This allows shorter take-off and landing distances, as well as slower (and safer) speeds, during these procedures. By having the ability to extend or retract the flaps, aircraft can take advantage of high lift, high drag wings (flaps extended) when needed, such as during take-off and landing, as well low lift, low drag wings (flaps retracted) when cruising at altitude.

Everyone will agree that two (or more!) aircraft colliding is to be avoided at all costs, but how? One way to keep aircraft at a distance from one another is to use standardised flight levels, which are in the form of FLxxx. For instance, FL250 indicates a flight level of 25,000ft (flight levels are measured in hundreds of feet). Flight levels are only in use above an arbitrarily defined altitude, called the transition altitude, which is 10,000ft in Australia. All aircraft flying above this transition altitude must recalibrate their altimeters to one standard atmosphere (1013.25 hPa). A flight level does not correspond directly with altitude ASL (above sea level) and it does not need to. At high altitude and high speed it is more important to have an accurate height reference relative to any other aircraft in the vicinity. 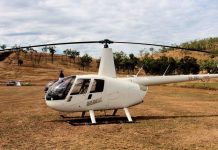 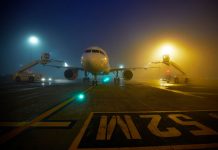 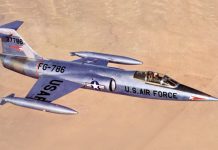