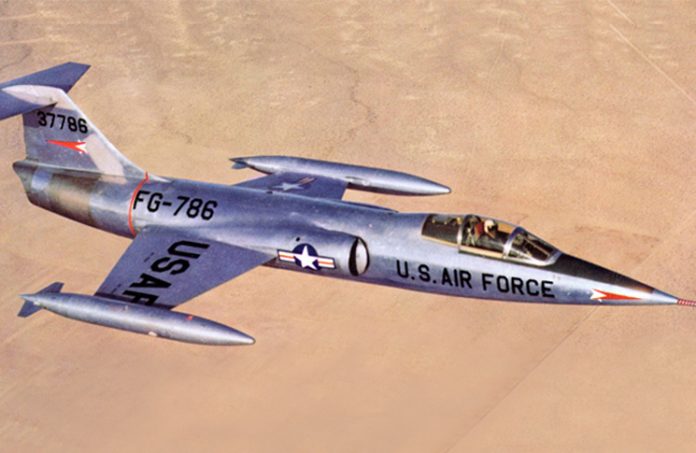 The legendary – and legendarily dangerous – Lockheed Starfighter might play a role in low-cost satellite launch, with reports of a plan to use it for launching miniature satellites.

The F-104 Starfighter was a Cold War supersonic interceptor capable of Mach 2.0 and a climb rate of 48,000 feet per minute. The last Starfighter was retired from the Italian Air Force in 2004 but a private operator in Florida US has proposed to use its aircraft as launcher for small so-called cube satellites.

Starfighters Aerospace proposes to mount lightweight rockets, each carrying a satellite weighing around 10 kg, on wing hardpoints originally used to launch air-to-air missiles. The Starfighters will climb to over 100,000 ft and launch their payloads into orbit.

Broadly speaking, their mission might look like this highly Hollywood-ised depiction of a flight in an experimental version of the Starfighter, the NF-104, that nearly killed renowned US Air Force test pilot Chuck Yeager. He ejected from the NF-104 after its hydrogen peroxide thruster system used in the thin atmosphere above 100,000 ft was unable to prevent a pitch-up and flat spin at the top-of-climb.

The Starfighter’s high performance and unforgiving flight characteristics led to a high accident rate (26.7 accidents per 100,00 hours in US service, 46 per cent attrition of the Canadian fleet), and a series of unflattering nicknames. The German Air force called it the ‘widow-maker’ or ‘tent peg’, Italian names included ‘hatpin’ and ‘flying coffin’.

The men who fell to Earth