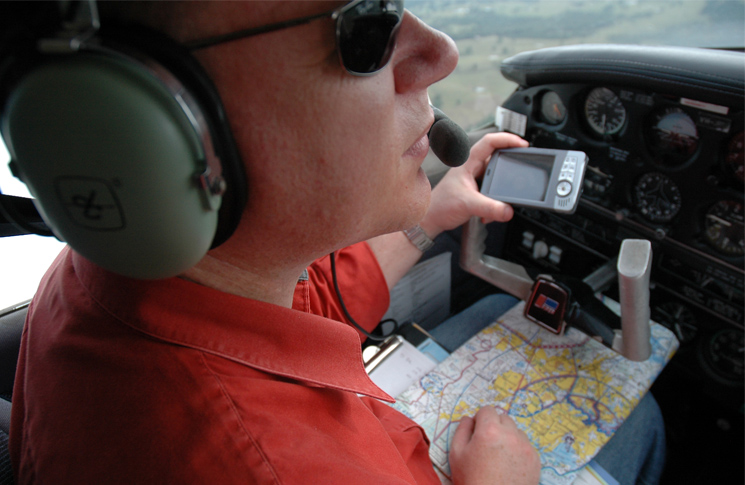 Did you know airspace capacity is determined by the combined capabilities of the communications, navigation, surveillance and air traffic management systems (CNS/ATM) in place? These include ground and aircraft-based systems and requirements vary according to the airspace being considered.

Ian Mallett and Ron Doggett are CASA’s CNS/ATM experts at the 2015 Australian International Airshow in Avalon.

Ian joined the RAAF in 1967 as a pilot and served in transport, instructional and staff positions including commanding officer of No 33 Squadron flying Boeing 707 VIP/tanker aircraft.

He joined CASA in 1990 as a flying operations inspector and has been involved in GPS adoption since then. This work has included considerable involvement with ICAO on the navigation systems panel and as chair of the regional performance based navigation task force (PBNTF) and ASTRA.

He is currently head of the CNS section in CASA, involved with the transition to satellite based performance based navigation (PBN), with the mandates for GNSS and ADS-B, the transition to vertically guided approaches (APVs) and investigation into a possible satellite-based augmentation system (SBAS) for Australia.

Joining Ian at Avalon 2015 is Ron Doggett, who started his career in the Royal New Zealand Air Force (RNZAF) as an avionics engineer. Following his 23-year RNZAF career, Ron worked in the UK for a navigation systems manufacturer where he became involved in the European area navigation implementation programme. This led to his working on several international panels developing the standards that are now part of the ICAO performance-based navigation (PBN) suite of specifications.

After London, Ron was a design engineer in Connecticut, US, at Kaman Aerospace where he worked on the Australian and New Zealand navies’ SH-2G Seasprite helicopter project. When the design phase of the project was completed, Ron returned to NZ and joined Air New Zealand in their design engineering group where he was responsible for avionics design certification.

In 2007 Ron joined the New Zealand Civil Aviation Authority aircraft certification unit. This was at the start of the ICAO performance-based navigation implementation initiative so Ron was soon deeply involved in navigation standards work again through the ICAO Asia Pacific region PBN Task Force (chaired by CASA’s Ian Mallett) and the ICAO PBN study group. In 2012 Ron joined CASA in the airways and aerodromes division, CNS/ATM systems branch. In this role, Ron has been working on the development of the CASA PBN standards and the implementation of PBN into Australia.

Both Ian and Ron are available at various times at the CASA stand in Hall 2 to discuss dangerous goods from Wednesday 25, February until Saturday 28 February.