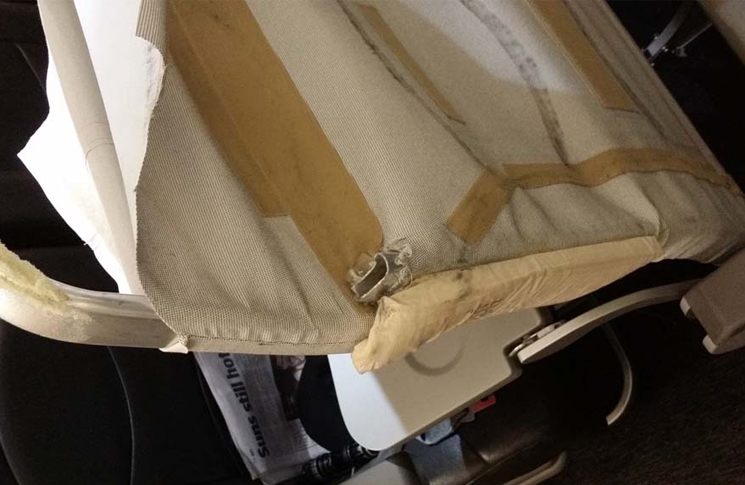 Airbus A330-243 Passenger oxygen system—oxygen mask failed to deploy. SDR 510022045
During functional check of the passenger oxygen masks, the oxygen mask boxes at locations 32HK, 34HK, 36HK, 38HK and 40HK failed to drop. Troubleshooting traced failure to wire 3523 5309 CF12 not correctly installed in the terminal block 5337VY block 2 pin H. The wire was inserted enough to achieve the appropriate voltages at each of the oxygen panel solenoids; however, it was not engaged enough to satisfy the current requirements to actuate these solenoids.

Airbus A330-303 Oxygen system—oxygen module faulty. SDR 510022062
Mid-galley oxygen module securing tabs taped to door which would have prevented the door from opening during an emergency. Module had been fitted since aircraft was received. P/No: 32C150342020005SNARTK0677. 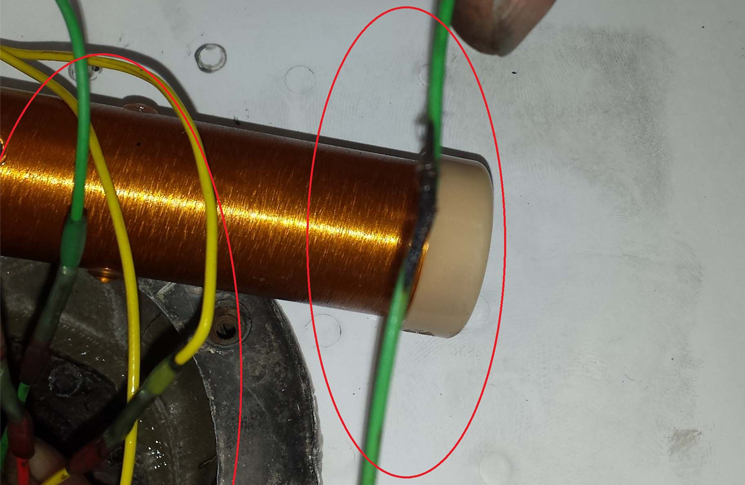 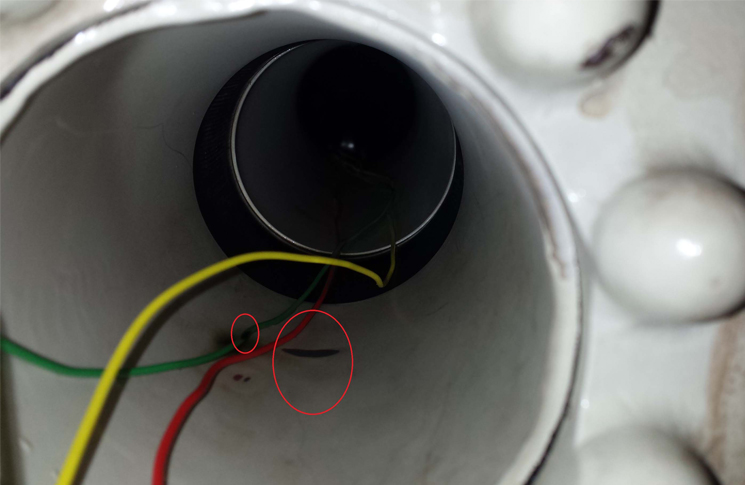 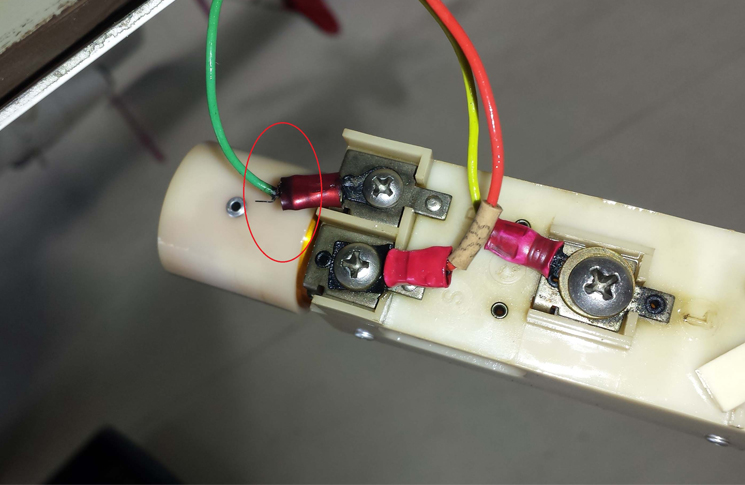 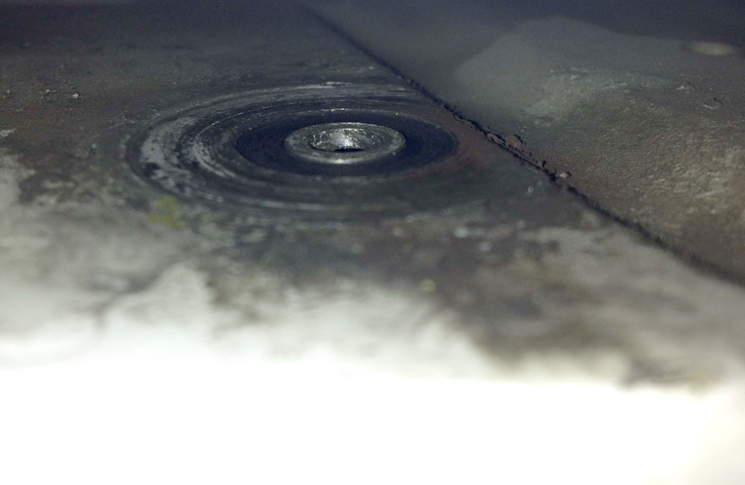 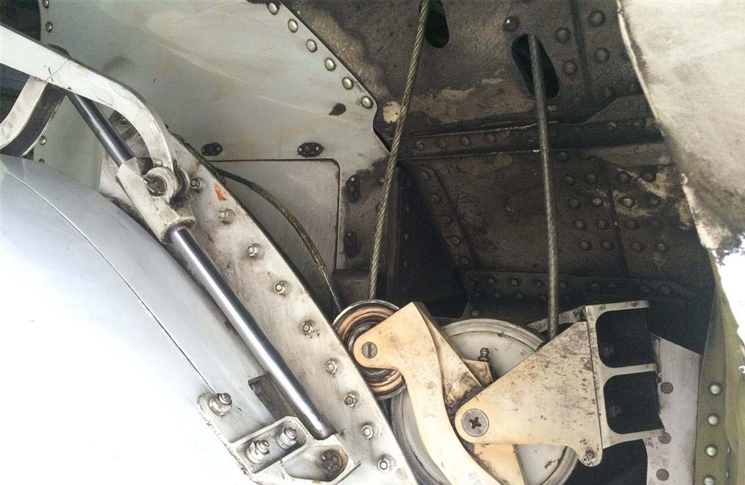 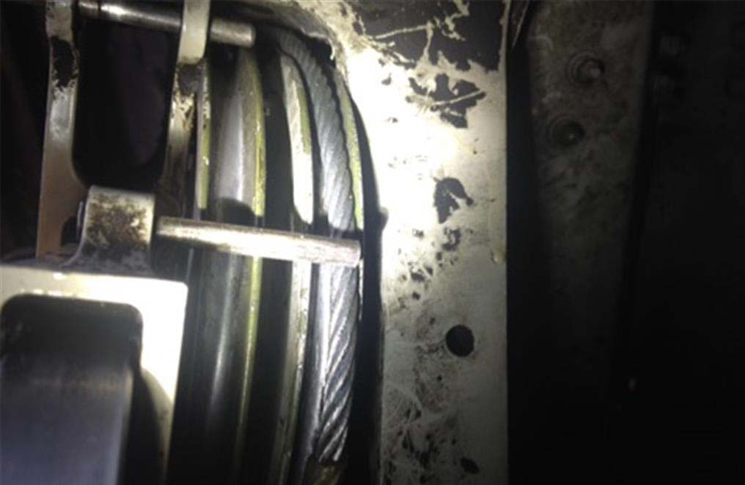 Boeing 717-200 Trailing edge flap control system—pulley incorrect assembly. SDR 510022120 (photos above)
During a daily inspection, the L/HS trailing edge flap buss cable was discovered dislodged from the pulley. The cable was found to have migrated into a gap positioned between the two pulleys. This gap appeared excessive and the assembly was removed from the aircraft for further investigation. It was discovered that the twin pulley assembly had been assembled incorrectly, with the twin pulleys oriented 180 degrees out, accounting for the excessive gap. P/No: 39228391. TSN: 31352 hours/21162 cycles.

Boeing 717-200 Wing structure—spoiler delaminated. SDR 510022071
After a report of noise during flap extension, a check of the area found that the L/H outboard wing spoiler assembly was delaminated to approximately 50 per cent of its lower surface. P/No: 59409741.

Embraer ERJ-190-100 Emergency equipment system—escape rope disconnected. SDR 510022017
Flight crew reported escape rope cover fell off in turbulence. Upon investigation it was noticed that the escape rope was not secured to the airframe. The attachment hardware was noted missing. R/H escape rope was found in the same condition. P/No: 17013162403.

Fokker F28 MK0100 Cabin systems—housing burnt. SDR 510022095
While passengers were disembarking, the cabin crew identified that both the forward and aft flight attendant call lights were flashing, and the oven chimes were ringing. At the same time they identified an electrical burning smell in the mid-cabin. Investigation identified significant burning/arcing damage and melting of the passenger row 13 AB PSU and its associated connectors, and damage from burning to the adjacent air-conditioning ducting. During detailed visual inspection to ensure the incorporation of AD/F100/79 and adequate prevention of moisture ingress, insufficient application of sealant was identified in various locations on all PSUs. Specific inspection of the PSU airframe wiring loom connectors, via backlighting of the connector identified insufficient sealing, with the majority of the connectors requiring the further application of sealant.

Fokker F28 MK0100 Cabin systems—seat incorrect assembly. SDR 510021916
Cabin crew discovered that the armrests of passenger seats 12AB and 12EFG were partially blocking the emergency exits. Investigation by engineering staff identified that the seats had been installed two inches forward on the left hand side, and one inch forward on the right hand side. Resultantly, the seat positions were adjusted, along with rows 13 to 20.

Fokker F28 MK0100 Fuel selector/shut-off valve—shutoff valve unserviceable. SDR 510021893
While carrying out an engine No. 1 fuel flow regulator (FFR) fuel bleed, engineering staff identified that the engine No. 1 fuel-fire shut-off valve (FFSOV) was not shutting off effectively when the left hand cockpit fire handle was pulled. Engineering staff subsequently replaced the FFSOV and actuator, further operational and leak checks were carried out without fault, and the system was declared serviceable.

Fokker F28 MK070 Wing spar—spar corroded. SDR 510022234
During scheduled inspection in accordance with AD 2015-0113 corrosion identified at four locations on the rear surface of the right hand wing rear spar between wing station (WSTA) 9270 and 9910, and one location between WSTA 10550 and 11190.Subsequently engineering staff removed the corrosion, and blended the areas as required, with the removed material then measured via non-destructive testing (NDT), and found to be within SB limitations. The surface protection of the affected areas was restored, and the areas were declared serviceable.