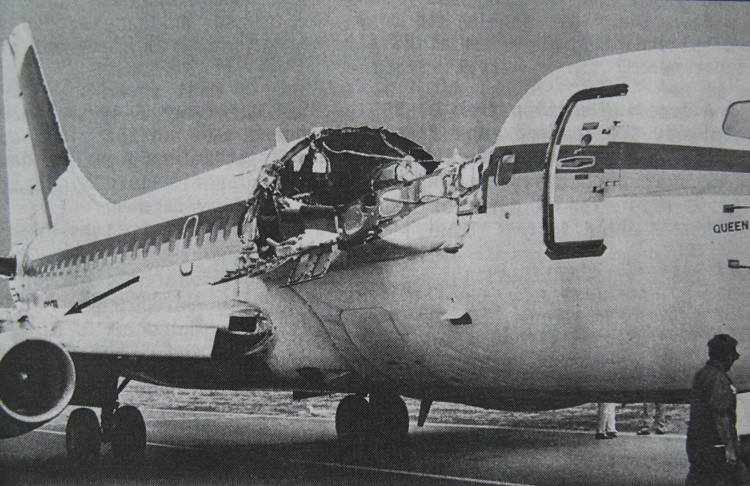 Today marks 28 years since the explosive decompression of Aloha Airlines Flight 243 over Hawaii.

Flight 243 departed Hilo in the early afternoon of April 28, 1988, carrying six crew and 89 passengers bound for Honolulu when 23 minutes into the flight—and at the cruising altitude of 24,000 feet—a small section of the roof ruptured.

The resulting decompression tore off a large piece of the roof sweeping one flight attendant out of the aircraft and leaving passengers seated in the first five rows with nothing but blue sky above them. The captain observed the cockpit entry door was missing and later stated ‘there was blue sky where the first-class ceiling had been.’

Despite the significant structural damage, the pilots were able to make an emergency landing at Kahului Airport on the Island of Maui. Along with the fatality of flight attendant Clarabelle Lansing, a further 65 passengers and crew were injured.

The low fatality rate of such a serious accident was attributed to all of the passengers wearing seatbelts due to the short-haul nature of the flight.

After the accident, a passenger said she noticed a crack in the aircraft’s fuselage as she was boarding but decided not to say anything to ground personnel or the flight crew.

The Boeing 737-297 built in 1969 was delivered new to the Aloha Airlines and only accumulated 35,496 flight hours at the time of the accident. However, those hours were across more than 89,000 flights, due to short routes around the small island nation.

Boeing 737-200s were only designed for a service life of 75,000 flights due to the stresses caused by pressurisation, which gradually weakens the airframe structure over time.

The investigation conducted by the National Transport Safety Bureau (NTSB) found that the probable cause was the failure of the Aloha Airlines maintenance program to detect the presence of significant disbonding and fatigue damage, which ultimately led to a failure of a lap joint in the fuselage and the resulting decompression.

The accident had far-reaching consequences for aviation safety, leading to a greater awareness of how aircraft age, the human factors aspect of air carrier maintenance and the importance of regulatory surveillance of maintenance programs.