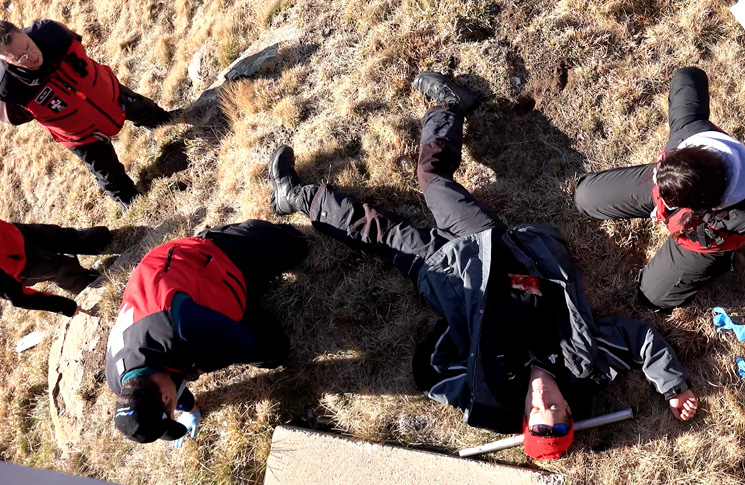 You are sitting in a Fokker 100 at Townsville Airport, relaxed now, after having paid attention to the safety brief from the cabin crew.

You look out the thick, small, window and watch as a flight of army MRH90 helicopters, also based at the airport, takes off in formation. From your soundproofed viewpoint they seem to float silently and gently, as fish in an aquarium. You are waiting to switch on your iPod. Then, without warning, one of the helicopters wobbles and lurches. Like an aggressive drunk, it staggers and reels towards you. It crashes into the Fokker and you are pushed into the seat in front. Blood erupts from your head and all around you hear screams, the sound of metal scraping, and the soft billowing boom of Jet A-1 fuel igniting.

This was the premise of Exercise Taipan—a joint civil/military exercise held at Townsville Airport in September 2014. The emergency response exercise was run in conjunction with the army and air force units in the city and made extensive use of the gory moulage make-up techniques used to inure against shock in medical students.

The Fifth Aviation Regiment provided an MRH90 and soldiers of the regiment honed their acting skills by pretending to be going to the nearby High Range training area when the tail rotor driveshaft failed. A bus played the part of the Fokker. An Alliance Airlines pilot and two cabin crew acted as they would have in an emergency. RAAF service men and women from 27 Squadron acted as passengers, and mannequins played the roles of the gravely injured and dead. Other actors played the roles of angry, grieving and desperate relatives, demanding answers from the hurriedly established operations centre. Airservices Australia’s Aviation Rescue and Fire Fighting service supplied the moulage.

Airports, maintenance hangars, and fixed base operators (FBOs) are among the aviation-related organisations that as part of their safety management system are obliged to train personnel in emergency response.

Emergency response training can take three forms. The choices are to think about what might happen, pretend it is happening, or, to create a situation where participants get to experience something close to the dreaded event actually happening.

These three approaches are known by slightly more formal terms:

Thinking: table top exercise—focuses on management and coordination of emergency response. It is a guided discussion based on a likely or common event scenario. A facilitator gives participants an opportunity to discuss their emergency management roles and responsibilities. Stress levels are low, but the gathering of diverse staff in one room can make it effective in uncovering obvious holes in an organisation’s preparedness.

Pretending: simulation exercise—these are focused on management control of a scenario-driven event. Exercise controllers can insert additional challenges as the exercise progresses. These are prescribed rather than experienced, however (‘firefighters, your mains water pressure is falling’), and detract from the realism that other parts of the exercise may attempt.

Experiencing: full-scale exercise—these are intricate and intense events that test all levels of an organisation, including management, coordination and performance of functional tasks. Participants complete their tasks as though it was a real event. Many groups and locations are involved and a high degree of realism is developed through use of props, actors and special effects, including explosions and moulage effects simulating graphic injuries.

There are two qualifiers: the difference between a full-scale and simulation exercise can be one of realism rather than size, and an exercise can take more than one form. Taipan was played out as a table top exercise on September 23, and enacted in full the next day.

‘You have to have the realism needed to jolt people out of complacency,’ she says.

The advantage is a degree of emotional engagement lacking in table top and simulation exercises.

‘It’s making sure people can control their emotion during that time period and do their job,’ Brix adds.

Training and response that does not address human performance under stress does not help much when the evil day arrives, he argues.

‘There’s a tendency for courses to be too short, and too easy—it’s economically driven, but it’s false economy,’ Shrubb says.

‘I’ve seen vertical rescue courses where it’s all laid out in the training facility with anchors here and there. The people turn up and get their competency boxes ticked, but what have they learned, really?’

Shrubb adds that emergencies have four characteristics that proper response drills must emulate.

‘You are always time poor, whether it’s someone with cardiac arrest or a buried miner, there’s always a time constraint. Secondly, you will be resource poor; you will have to deal with the situation using the tools on hand, be it a first aid kit, or fire extinguisher. Thirdly you are information poor; it is likely there will be only very sketchy information due to the spontaneous nature of the event. Finally your environment is likely to be rapidly and dynamically changing.

‘You can apply those constraints to a mine, a mountain or an aviation cockpit. Underneath, it is all human performance based, irrespective of the context.’

Realism is regarded as critical, but where does it come from, and how is it created? Shrubb believes it comes from creating feasible events that occur spontaneously and engage the emotions of participants.

‘The key thing we have to create in these scenarios is emotional engagement,’ he says. ‘Emotion’s function is to trigger action, but the other side is that cognition may be compromised in the very same moment. The training allows accurate rehearsal of events so that the reactions are firstly not as intense, and secondly, the action itself is more appropriate in the heat of the moment.

‘We’ve had responders say to us that they’re found the training as stressful as the actual tasks they performed in their careers. The idea is to immerse people to a level in which they no longer believe they are in a scenario.’

Emotional engagement leads to more robust learning and sustained performance shifts due to the mind’s learning mechanisms, he says.

‘In true experiential engagement we create moments, where people have life-changing insights about themselves, about others. Those moments create memories.’

The search for emotional impact in emergency response exercises leads to an unusual destination—the theatre door. But Shrubb and Brix independently argue that an effective disaster response exercise is a form of theatre, where the line between the audience and the players becomes blurred.

‘We call the people who are acting in the exercise, role players,’ says Brix. ‘We set up a master schedule of events—that’s like writing the play. You put up the things you want to practise, you have a time schedule attached and you have exercise directors who can stop or start the exercise or ask a role player to play it differently.

‘We have evaluators, who stand on the sidelines, I suppose they are the critics,’ she muses.

‘With good theatre there’s emotional engagement, when the actor cries or laughs as the audience we experience that,’ he says. ‘But other things come together, the plausibility of the plot, the production design. You’ve got to get that approximation of reality and that’s the difference between producing an experience and a scenario.’

However, the script is not set in stone, and must never be, because the purpose is training to think and act, not recite lines.

Risk Response+Rescue partner, Phil Richards says, ‘The key underlying principle here is that the natural, spontaneous mechanisms that create life’s events must also be utilised in the execution of experiential scenarios themselves.

‘Too much scripting is unnatural and tends to impact on the value of the exercise. The team that facilitates the exercise must also be capable of reacting to the material the exercise offers up in the moment and then turn that into valuable learning for the participants. That’s where it goes from being “an exercise” to a “performance development” process.’

Shrubb says an exercise is more like Saturday Night Live than a rehearsal. ‘You have a few rules of engagement, but no actual script, because your team has to be at a level where they interact within the boundaries, which in our case are life and death. By contrast, “dying on stage,” is just a phrase.’