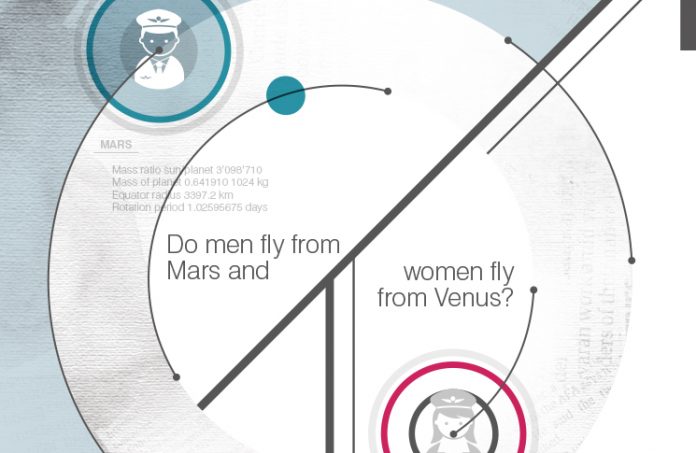 Kreisha Ballantyne wonders if a little gender bending might not make all pilots safer.

Of all the topics I’ve researched for this publication, the topic of gender disparity in pilots has been the most spirited. Having spoken to a wide selection of pilots and instructors across the industry, this is a subject on which every individual has a personal story.

As a pilot who flies in heels and lipstick, I’ve encountered a variety of reactions—from industry and from the general public—of which I’d like to cite two examples:

At my local coffee shop, in pilot uniform, as required by my CPL training course:

I assumed from your name that you were female. However, having just read your excellent flight review of the Sportcruiser, I now doubt myself. Would you kindly enlighten me?
Reader, Sport Pilot magazine 2011

The examples above highlight that there is still some outmoded thinking about female pilots, but more than this, they made me wonder: is this why so few women enter the industry in the first place? The question of why more women are not flying is discussed at length in this previous Flight Safety Australia article ‘Women’s Work’.

However, I’d just like to add that my early experiences in learning to fly were pretty off-putting, and it’s a testament to my stubborn spirit that I made it through at all: ancient aircraft with no air-conditioning parked in the baking sun; the occasional sweaty instructor with poor hygiene; teaching methods that wouldn’t be out of place in a 1970s Open University program and aero clubs populated by gentlemen sharing stories of times before I was born. The only women I ever saw were behind the booking desk. It’s little surprise there are fewer that three female pilots in one hundred.

In order to randomly meet a female pilot in the general public, you would have to meet 5623 women (in the USA, no accurate data available for Australian pilots). As Flight Safety Australia contributor Thomas Turner explains, ‘I think a significant factor in the generally more positive impression of female student pilots is self-selection: women who pursue flying (or sports, or careers in science, etc.) are usually bucking cultural norms, so that those who DO pursue skills such as flying tend to be the more studious, independent, logical, ‘thinker’ types. Meanwhile, any male thinks he can fly an airplane and society doesn’t tell him otherwise. So we end up with the broad spectrum of male pilots, and the right side of the bell curve with females, as a result not of inherent gender ability, but of traditional cultural norms.’

Despite the fact that fewer women than men enter the industry, the numbers are increasing. As a consequence of that increase, will we see changes in the way students are taught; will a balance between testosterone and estrogen create a less ego-driven field; will public perceptions of pilots change over time? And, most importantly, what can we learn from each other?

Are men from Mars and women from Venus?

In his bestselling book Men are from Mars, Women are from Venus, author John Gray asserts, ‘not only do men and women communicate differently, but they think, feel, perceive, react, respond, love, need, and appreciate differently’.

It has been established in multiple studies that there is a variation in aptitude, skills and cognitive abilities between male and female pilots. The largest cognitive gender differences are found in visual-spatial abilities. Spatial ability includes accurately visualising an object as it rotates in space—a practical skill required to operate in a three-dimensional environment. Research has demonstrated that males possess greater visual/spatial skills than females. However, females possess stronger verbal skills than males. While spatial skills are important to obtain proficiency in take-off and landing procedures, traffic avoidance and basic manoeuvring of aircraft, verbal skills, on the other hand, are vital to maintain safe air traffic control communication and facilitate cockpit crew coordination.

Although there are some arguments indicating that the extent of cognitive gender differences are not only small, but they are also diminishing, another argument claims that the general populations of women tend to have lower visual-spatial abilities than men, but women entering the flying professions may be those who excel in the attributes needed for being a successful pilot, as per Thomas Turner’s suggestion above.

Male and female pilots tend towards different accident profiles. General aviation aircraft accidents claimed an average of 652 lives annually between 1995 and 1999, which accounted for 85 per cent of all aviation deaths in US. A study conducted by Derbyshire (2001) found that the most common accident was loss of control during take-off and landing. Fifty-nine per cent of female accidents and 36 per cent of male accidents were a result of this error. Female pilots had a tendency towards accidents due to mishandling the aircraft, while male pilot accidents were due to inattention and flawed decision-making. The ratio of pilot error between male and female pilot from 1983 to 2002 showed that female pilots might have had a slightly higher proportion of pilot error. However, a recent study by Bazargan (2010) found that male GA pilots were more likely to be involved in fatal accidents. These results support the finding of Vail and Ekman (1986) that male GA pilots take greater risks than female pilots, which leads to more fatal accidents.

So, if women and men are inherently different, and do display different accident profiles as the evidence above suggests, then it’s clear that the industry needs to change to accommodate the differences, and in doing so, will be working to reduce accident rates.

The art of communication

If communication is a female strong point, then maybe the increasing arrival of female pilots in the industry will lead to improving the one area where communication tends to vary wildly: flight training.

Helen, a private pilot and sky-jumper, told me, ‘I shed many tears learning to fly, as I did learning to skydive. With flying, my husband, Bill was always going to be ahead of me, which I didn’t mind—he’s the technical one—I’m the literary one. I struggled with instructors’ attitudes: I believe anyone can learn to fly and was determined to, however long it took. I got on much better once my instructor had talked to me about my progress and think I would have done much better if we had talked much earlier. Women sometimes lack the confidence to speak up and ask about their progress.’

Jen, also a private pilot, added this, ‘the most frustrating thing about learning to fly was dealing with instructors! I am a steady learner, and I really enjoy study, but I need a thorough de-brief after my flight to process and solidify what I’ve learned. Often an instructor would attempt to debrief on the taxi back and then run to another client with the prop still turning, which is unacceptable! Eventually, I made it clear to my instructor that I needed a longer debriefing session, and ending up changing instructors to one who respected that.’

Bill, a retired instructor who was verbally recommended by many female pilots I’ve met, told me, ‘the key is to understand that every student needs a different method of teaching. The art of instructing is in ascertaining your students’ needs by listening to them. Female students tend to be far better at communicating this. They also tend to be more likely to ask the tower or ATC if they don’t understand something, and are nearly always great communicators on the radio.’

Women tend to communicate early and often about a problem. Men are more likely to view communication as a tool, and when they see it as the wrong tool for the job, they believe it should be stored neatly back in the toolbox.

Changes and developments in the structure of flight training, with a greater focus on communication skills in instructor training programmes, could potentially attract more women to, and keep more women in, the industry, but also teach those students who find communication challenging that speaking up, expressing oneself and articulating their struggles in training may lead to safer flying.

Requiem for the ego

It’s all about male ego. The constant need to show off. Without exception all my best students have been female. [Thomas, instructor]

Kathy, private pilot and aircraft owner says, ‘As an example of male-driven ego, I have only ever had one woman fly into my private strip. She took the advice and arrived and departed calmly and as requested every time. I’ve banned or warned at least seven males flying in here. They can’t help themselves: they have to do a wingover or a loop or a beat-up, even after being asked, begged many times as it upsets the neighbours—they just never get it!’

When researching this article, I was utterly swamped by comments and stories detailing pilots’ ego, enough indeed to warrant an entire article on the subject. Interestingly, stories came equally from males and females, with many a male pilot articulating the challenges of not being an Alpha-Male in an alleged ego-driven field. This example from private pilot Peta highlight this.With respect to my male pilot friends who display all the same fine qualities as my female pilot friends.

Student pilot: I just did an awful landing, worst of my life, and I feel stupid.

Young male pilot: I nail every one of my landings; every one is a greaser. It’s just practice.

Female pilot: That doesn’t sound too bad, let me tell you about my worst landing—far worse than yours! It’s just practice.

My personal experience has highlighted that the greatest ego stage in pilots is in pilot training, among student pilots. As ego is a form of self-defence, it’s obvious that it would be on greater display when a person is feeling less secure. Learning to fly is daunting for almost everyone, and a student pilot is always reminded of what they don’t know, what they have yet to learn, which is a vulnerable place to be. Perhaps this is why we see so much ego at this stage, particularly in young men.

A certain amount of ego is required to fly an aircraft (if you Google ‘ego’ the results will return ‘nerve’ which is unarguably required for flying). From ego and self-confidence come assertion, courage and self-knowledge. An ego imbalance, stemming from insecurity, can certainly lead to impulsive and risk-taking behaviour. The role of flying instructors—and by extension, older pilots and longtime pilots—is to mentor young pilots, both male and female, to encourage confidence, transparency and a culture of self-awareness. While it’s vital to be aware of gender-related tendencies towards behaviours, the most progressive movement our industry can partake in is that of a just, transparent culture, which is also the foundation of a safety culture. In that, maybe male pilots can share their confidence with female pilots, and female pilots open the forum to better communication. And perhaps, occasionally, we can visit—and fly from—each other’s planets.