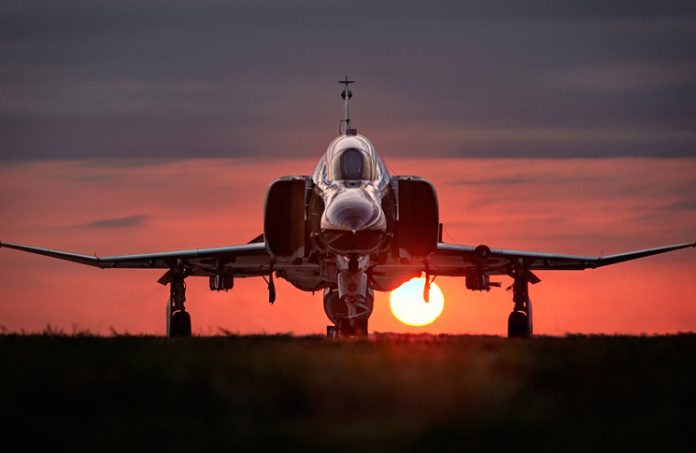 This is a skillet!—a frying pan!—a short-order grill!—not gray but black, smeared with skid marks from one end to the other and glistening with pools of hydraulic fluid and the occasional jet-fuel slick, all of it still hot, sticky, greasy, runny, virulent from God knows what traumas—still ablaze!—consumed in detonations, explosions, flames, combustion, roars, shrieks, whines, blasts, cyclones, dust storms, horrible shudders, fracturing impacts, all of it taking place out on the very edge of control … and little men … are skittering about on the surface as if for their very lives (you’ve said it now!), clustering about twin-engine F-4 fighter planes like bees about the queen … and then running for cover as the two jet engines go into their shriek and a huge deflection plate rises up behind the plane because it is about to go into its explosion and quite enough gets blown … off this heaving grill as it is, and then they explode into full afterburner, 31,000 pounds of force, and a very storm of flames, heat, crazed winds …

Wolfe’s vivid verbal riff leaves no doubt that an aircraft carrier deck is a very dangerous place. The interesting thing from a safety point of view is that aircraft carriers have become much less dangerous. By the US Navy’s figures, 776 naval aircraft were destroyed in 1954; in 2015, the equivalent number was seven.

In 1984, Todd LaPorte, Karlene Roberts and Gene Rochlin from the University of California, Berkeley, began analysing organisations where hazardous activities were part of their everyday business, but which had few accidents. Among their objects of study were nuclear power stations, electricity distribution networks, air traffic control—and aircraft carriers. LaPorte, a professor of political science who had been a US Marine corps pilot, wangled fieldwork placements for the team (Roberts was a psychologist and Rochlin a physicist) on two US Navy carriers. Their reports, published in 1987 and1988, introduced the academic world to the concept of the high-reliability organisation (HRO).

As important as their preliminary findings, was the overarching question: why do some organisations do so well at managing risk? LaPorte, Roberts and Rochlin wrote of ‘pervasive operating tension’, ‘reliability-oriented allocation of responsibilities’, and the implicit bargain that ‘in effect, operational reliability rivals short-term efficiency as a dominant organisational value’.

Karl Weick and Kathleen Sutcliffe use the concept of sensemaking in one form of answer to the HRO question. Their five-point summary offers useful advice for any individual or organisation to increase their operational reliability.

Weick and Sutcliffe found a distinctive form of organisational sensemaking in HROs, characterised by mindfulness. This is a heightened awareness of the hazards of the business. High-reliability.org defines mindfulness as, ‘a mental orientation that continually evaluates the environment, as opposed to mindlessness where a simple assessment leads to choosing a plan that is continued until the plan runs its course’.

Weick and Sutcliffe say mindfulness can be broken down into two processes—anticipation and containment.

High-reliability principles can guide individuals and organisations in more effective management of risk. They are, in effect, good habits, and few enough to remember on the fingers of one hand, forming a structured way to assess the question, ‘What am I or what are we doing about safety?’

Gamble, M (2013). 5 Traits of High Reliability Organizations: How to Hardwire Each in Your Organization. Becker’s Hospital Review, 29 April 2013