Home Feature Dancing with the STARs* 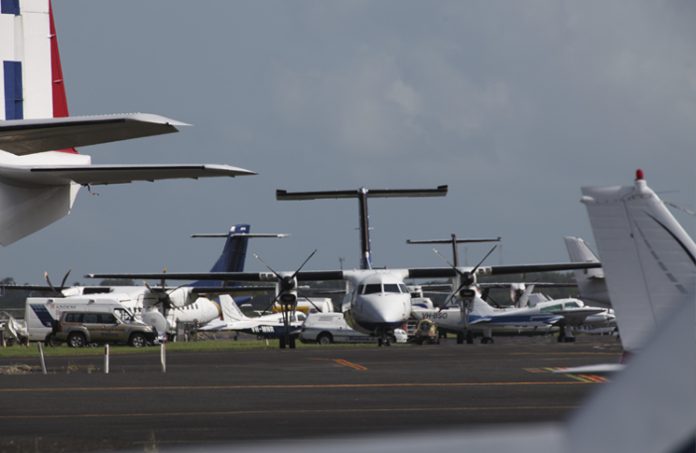 In early January 2011, I excitedly undertook a commercial pilot licence hour-building flight from Bankstown to Jandakot. I hired a Piper Archer from my local club and hand-flew it across Australia in heels and lipstick, to demonstrate to young women that flying can be glamorous as well as technical. The aviation equivalent of a ‘gap-year’, the trip taught me to be self-reliant, well planned and better organised. As part of the learning curve, I challenged myself to land at all kinds of aerodromes, from sockless bush strips to state capital airports. Having undertaken most of my training at Camden and Bankstown, I was relatively comfortable with radio calls and tower ops; however, other than a few trips to Bathurst, I had little experience of operating in class G aerodromes that also receive regular public transport traffic (RPT).

As part of the preparation, I touched base with a former instructor who went on to fly Dash 8s for a regional airline, and he offered the following invaluable information. ‘Most RPT pilots can still remember their time in GA and the fact that it’s understandable to be a bit nervous when talking to RPT pilots/aircraft, who are probably more experienced, and operating on a tight time schedule. So some useful advice is to be well prepared before entering an area where you’ll mix with RPT pilots on the radio; which includes airports in class G airspace serviced by a regional operator.’

Direction: Know where you are relative to the airport. One of the main eight cardinal compass directions will be fine (if you reference a radial, well and good, but make sure it’s accurate). Also, state your current altitude and the planned altitude you’re aiming for as well as the current direction you’re travelling—are you heading towards the airport, or away from it?

Rehearsal: If there is time available, practise your radio call in your head before talking on the radio, so that it sounds more fluid and professional. Don’t rush the radio call, but be concise and accurate.

Confidence: The mental rehearsal suggested above will help you sound more confident and professional. RPT pilots have little time (and only your voice) during a radio call to make a judgement call on whether to trust that what you’re saying is accurate, and if you’re likely to do what you say. Having said that, there are a number of first officers who are new to RPT ops and can easily have less total time than some more experienced GA pilots. Don’t always assume that when RPT pilots are talking on the radio that they have thousands of hours of experience—they may feel as nervous as you at times.

Avoiding conflict in the circuit

Speed: Differences are noticeable in the circuit. GA aircraft—which include LSAs, light twins and everything in between—have speeds in the circuit anywhere from 50–150 knots, whereas most regional turbine-powered aircraft will be travelling at 170–190 knots on downwind, and depending on weight, 120–140 knots on final.

Landing with tailwind: Most RPT ops will land with up to 5–10 knots tailwind as standard procedure, if it is beneficial for time and schedule. For example, landing with tailwind, when the terminal is at the other end of the runway, makes it easy to land and roll straight off into the terminal area, then take-off from the same end into wind, and vice versa. RPT (transport category) aircraft generally have superior performance capabilities to GA aircraft, so when they operate in this manner, it might seem confusing to a GA pilot. If you hear an airline pilot’s radio call stating they’re heading for a certain runway, don’t assume it’s always into wind and therefore suitable for light GA aircraft, too.

‘The differences in GA and RPT aircraft performance and operational constraints means that our intentions and situations can easily conflict,’ my former instructor tells me. ‘We’re aware of this, so when we hear a GA pilot, we will try and work with you guys to come up with the best solution for both of us. Being flexible is also important. Both GA and RPT work better together if they are open to accept some changes in the operation of their aircraft when we find ourselves in the same class G airspace at the same time. This sometimes involves the GA pilot offering to extend downwind so we can land straight in, or perform an orbit approaching the circuit so we can land straight in before them.

These offers are very much appreciated by the RPT pilot. We realise technically you don’t have to do this, but it does help us keep hundreds of people, over the course of a day, on schedule. RPT pilots regularly negotiate with other arriving aircraft at class G airports, and often, we’ll slow down to allow another aircraft to land before us, if it makes the whole process simpler and safer. Lastly, an air of camaraderie between us GA and RPT pilots goes a long way. This involves both pilots working together to come to the most efficient and safest solution for both our operations. This is most often expressed by me with a ‘thanks mate’ or an ‘appreciate your help’ added to my radio call when a GA pilot has helped me out.’

Camaraderie was a recurring theme amongst the pilots I interviewed, along with the ability to remain open to amending plans and the willingness to have a conversation regarding conflict management. A 737 first officer tells me, ‘it’s always handy for us to have accurate time estimates from GA pilots, as we use them to determine whether there’s a potential conflict that needs to be managed. The difference between RPT and light aircraft is that we don’t have the manoeuvrability or flexibility to orbit if the estimate is going to cause conflict, and that’s where reaching a plan, that ensures separation from you, is essential.’

Use of the radio was also a very common topic, with RPT operators urging GA pilots to transmit often. ‘One of the most important requirements we have from GA pilots is that they use the radio for listening out: some simply turn on the radio and ignore it until they transmit to call taxiing, and have no awareness of where we are,’ continues the 737 FO. We transmit our first call at 35 nm out, and then if we hear nothing, our next call can be when we’re joining final. If we know you’re out there, we’ll communicate with you as frequently as we feel necessary.’

From an instructor’s point of view, safety is number one when teaching students to operate in class G with RPT. Bankstown Flying School chief flying instructor, Gary Clarke, says, ‘situational awareness is absolutely vital. I aim to teach my students to visualise the position and speed of the RPT aircraft, and I urge them to ask themselves, “what can I do to facilitate this high performance aircraft with dozens of souls on board?” While RPT traffic does not have automatic priority over light aircraft, it’s vital to be mindful of the cost differential of both operations. I encourage my students to make themselves aware of the RPT timetables if flying to a class G with RPT, such as Moruya or Bathurst. Additionally, I suggest giving an extra call, at say 20 or 25 miles out and to monitor the radio very closely. I recommend the students write down the flight ID of the inbound aircraft, and have an awareness of its type and performance. Bearing in mind the circuit height of high performance aircraft is 1500 feet AGL, and their speed on final may be as fast as 190 knots, the pilot of a light aircraft needs to be thinking ahead, and be prepared to give way and possibly orbit. While this is certainly not a requirement, it’s great airmanship, and something I like to teach my students from the get-go.’

Armed with this advice and information, my experiences into class G with RPT were uneventful on my big trip. I interacted very effectively (and pleasantly, too) with a Saab into Devonport, where I gave way and received a wave from the captain when I taxied past on the ground. I spoke to umpteen RPT, charter and other high-performance aircraft pilots over the course of that trip, and learned that it’s always better to speak up (although talking has never been an issue for me) and to offer more information, rather than less. On reflection, I realised that we’re all people, and even the mighty A380 captain once started in a humble Cessna 152, and every one of us is invested in avoiding conflict at all costs.

The ABC of RPT in class G

A—Awareness: be aware of your direction relative to the airport; of the position of incoming and outbound traffic; of yours and their altitudes and groundspeeds.

B—Be clear: state clearly where you are, what your intentions are and what time you expect to arrive in the circuit.

C—Communicate: do not be afraid to use the radio, and to make extra calls if necessary.