Marty McFly and Emmett Brown, eat your heart out. The world’s first autonomous flying taxi has made its maiden flight in Dubai.

The electric two-seat craft, made by German firm Volocopter, will be used for the world’s first pilotless taxi service to be introduced by the Dubai roads and traffic authority in about five years as part of Dubai’s bid to be the world’s smartest city. It hopes that the aircraft will handle 25 per cent of passenger journeys in the city by 2030.

Volocopter’s investors include German automotive giant Daimler, which has put 25 million euros (about $A37.4 million) into the company.

According to a Dubai RTA media release, the prototype air taxi is environmentally friendly and quiet. It has a maximum flight time of about 30 minutes at a cruise speed of 50 km/h, (27 kt) with a maximum airspeed of 100 km/h (54 kt). The vehicle is about two metres tall and the diameter of the rotor rim, including the 18 propellers, is seven metres.

Over the next five years, the RTA will collaborate with United Arab Emirates and Dubai Civil Aviation Authority to develop operational policies and procedures, including aircraft certification, safety and security standards, routes and landing points.

Dubai RTA Director-General, Mattar Al Tayer, said ‘the autonomous air taxi has a variety of unique features that include top security and safety standards, and multiple redundancies in all critical components, such as propellers, motors, power source, electronics and flight controls.’

‘It is also fitted with optional emergency parachutes, nine independent battery systems and a battery quick-charge and plug-in system, which takes two hours to reach full charge in the prototype version, a time that will be significantly reduced in the production version.’ 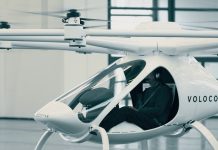 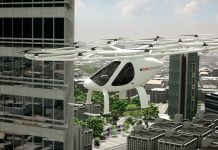