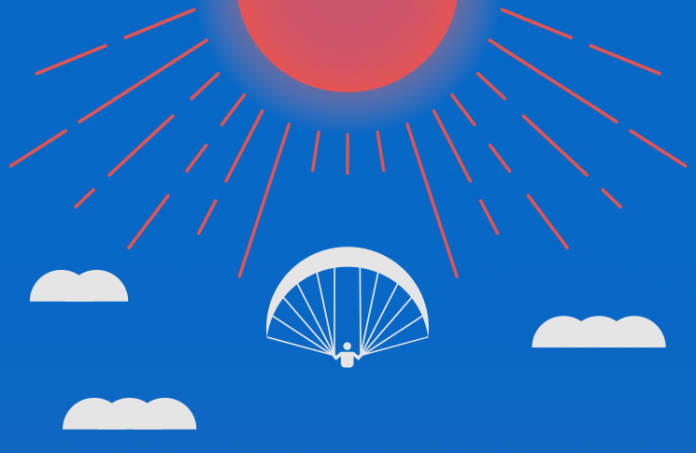 It was a warm, sunny, late morning on an abandoned airfield surrounded by patchy red earth. You could almost see the thermals popping all around. It seemed like a good spot for winch-launch training, the instructor also being the country safety officer. It was almost 19 years ago now, at Dunottar Military Base, Gauteng, South Africa.

I was on a locally manufactured Fun2Fly Aztec, at the time a firm favourite with students. Looking at the historical data, it seems the glider was unrated and I think that the design was based on the Edel gliders. The material was Gelvenor with Dyneema lines, and they were manufactured from 1995 onwards. This would have been in about 1998.

I launched and was pulled up to maximum when I pulled the pin and released the cable, immediately starting to scratch around for a thermal.

Suddenly, my guts dropped like I was in a freight elevator and I knew I had flown into a strong thermal.

I pulled the right brake to turn into the thermal and spiral up, but as I pulled, I exited the thermal. The cascading air on the edge of the thermal pushed down on the side of the wing on which I was already pulling the brake hard. Half of the wing collapsed and I started to spin violently. I pulled the left brake hard to stop the spin, putting myself in a full stall.

I dropped like a stone, but at the time I was naively not worried at all.

The manufacturer stated that the glider would unfurl, unfold or otherwise correct itself within four seconds.

I looked up and saw that the downward motion caused by the upwards rushing air was pinning the folded part of the wing to the underside of the glider, and it was not unfolding as expected. The lines on the right were hanging slack, so there was no point in trying to pull on anything on that side. The left was on full brake to stop the spin, and when I released it slightly, I started spinning again. I still had height and was working through my options, but getting closer to the ground rapidly. I think it was at this point that I started getting concerned. We did not have reserves, something which was relatively unknown at the time, and the harness consisted of a basic seat-type arrangement with no padding.

I started making small pistoning movements with the left brake, from full to about 75% to push the air from the inflated area of the glider through the cross vents to inflate the right side. My fear at this time was that the loose-hanging lines would get caught over the wing as it inflates. I shouldn’t have worried, the wing was not unfolding fast enough, and I hit the ground feet first. I did a parachute landing fall (PLF), something I was familiar with because of a skydiving course I did previously. It was my good luck that the field in which I fell had recently been ploughed, with huge sods of freshly turned earth, partly matted with grass, cushioning my fall. I guess it acted the way a modern harness with foam padding would. Despite this, it was still a huge hit and I was shaken and hurt.

I didn’t move for a while, hoping that someone would come to help me determine whether there was any spinal damage before trying to get up.

But it seemed that no-one had even noticed—as soon as I was released from the cable, their attention was focused on the next student.

I slowly moved, first my arms, then my legs and then sitting upright. My lower back hurt like I was kicked by a horse, but there didn’t seem to be any sharp pains, grating of bones or other signs of damage. I stuffed the glider into the bag and walked back to the launch area, my anger growing with every step. So many thoughts passed through my head—why did the manufacturer make promises that were not true? Why did my instructor not look after me, check that I was doing ok up there?

I handed the glider back to her and left—I can’t remember what I said, but she passed it off as nothing, not filing a report. I left and didn’t fly again for seven years. When I did return to the sport, I only flew coastal flights, and even in this relatively smooth environment, I would suffer from a debilitating fear every now and again. Inexplicably and illogically, I would fly along without any issues, no turbulence and all of a sudden I just had to be on the ground. It felt like a steel belt around my heart, pulling tighter and tighter. Fortunately, with time and regular flying, this phobia disappeared. I guess it was also a matter of confidence—with better information and easier access to it on the internet, I gained a much better understanding of how thermals work, what they look like, what to expect and what it feels like when you’re up there.

I’ve been flying for 12 years now after the incident, and will continue to fly for many more years.

What I learned from the experience is that when you’re up in the air, you are on your own—there is no-one to take responsibility for your safety and really nothing anyone can do to help you. Their involvement stops the moment you take off—no matter how good your training and how safe your glider, it is your own actions that determine your fate.

Secondly, you can never have too much information, and with modern technology, there is no excuse not to keep learning. Learn about aerodynamics, weather, learn from others’ experiences, visualise potential situations and mentally practise your actions and reactions. Be prepared for anything.