Home Feature When advice isn’t the same as guidance

Your IFR aircraft has a TSO GPS receiver and ADS-B transponder. Your instrument rating and charts are up to date and you believe you’re ready to tackle an LNAV/VNAV approach, also known as baro-VNAV.

But are you? Labels can be confusing. Just because your GPS says it’s baro-VNAV capable doesn’t mean you’re ready to entrust your safety and those of your passengers to your GPS receiver.

Not all GNSS approaches are the same. To undertake baro-VNAV, you need:

LNAV refers to lateral (2D) guidance for a GNSS non-precision approach. An LNAV GNSS approach will get an IFR pilot on the correct path, but the pilot must ensure that the aircraft is at the correct altitude at each fix. The aircraft must not descend below the minimum descent altitude (MDA) unless visual.

Some GNSS receivers (particularly Garmin models) are capable of displaying an advisory vertical profile. This is sometimes known as LNAV+V, and there are important difference between this and baro-VNAV.

With LNAV+V, the vertical component is generated by the receiver itself, rather than from a properly coded and validated underlying RNP APCH (RNAV GNSS) approved instrument approach procedure. The pilot must still respect stepdown fixes throughout the approach, and must also not descend below the LNAV MDA unless visual.

Approaches with vertical guidance (3D approaches) offer a smooth and stabilised descent. They improve situational awareness and reduce workload. In Australia, baro-VNAV is being rolled out in line with ICAO recommendations to establish safer approaches to landing.

Baro-VNAV relies on highly accurate altimeter readings, which take account (among other things) both the aerodrome local QNH and temperature. Its use is also restricted to runways with a validated promulgated LNAV/VNAV RNP APCH instrument approach procedure.

The use of baro-VNAV also requires avionics including an air data computer—typically a certified flight management system (FMS) or other suitably certified area navigation system capable of computing barometric VNAV paths and showing relevant vertical deviations (within a range of plus or minus 75 feet) on the cockpit instrument navigation displays.

For the RNAV GNSS RWY 32L approach at Launceston, for example, the baro-VNAV (LNAV/VNAV) DA is 960 ft; without vertical guidance (LNAV only) there is a MDA of 1200 ft. See the chart below. 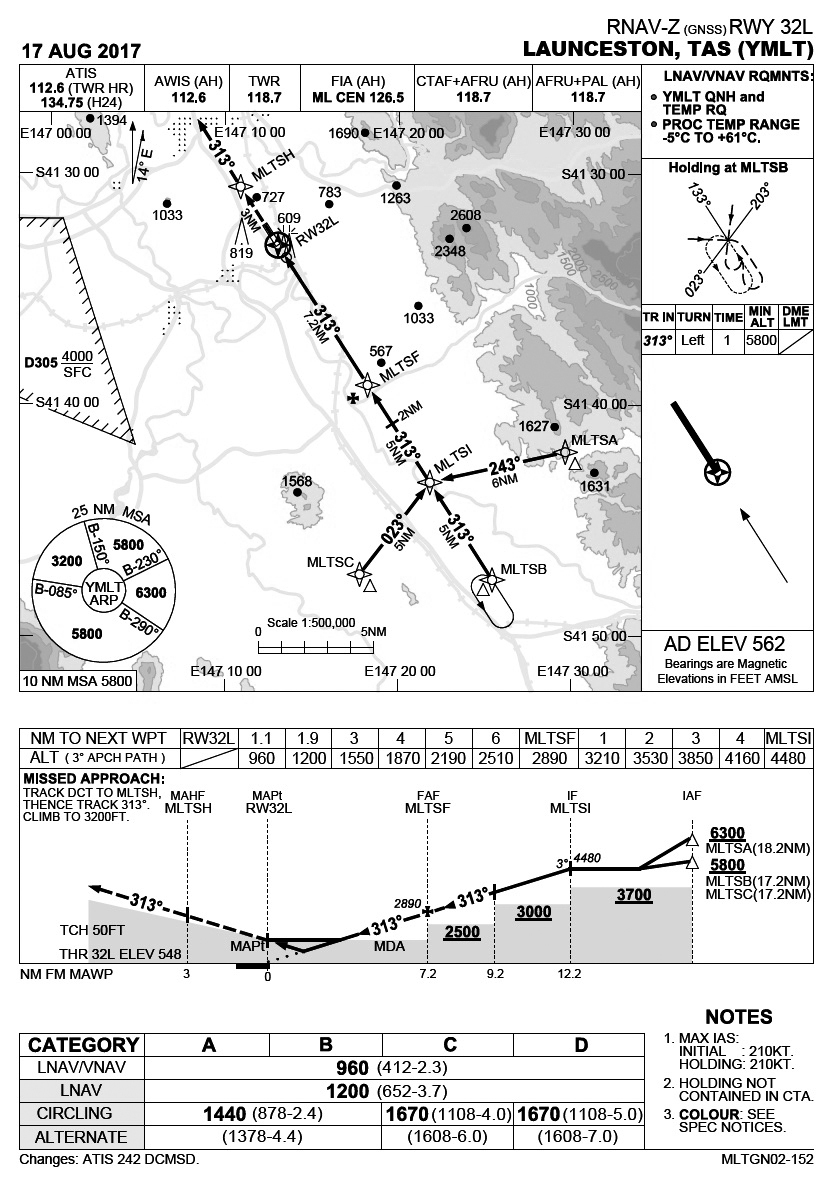 In some cases, there will be separate charts for LNAV-only (2D) and LNAV/VNAV (3D) approaches. Typically, this will be because obstacle clearance requires a different flight path and missed approach point (MAPt) for the two approaches.

As well as having a suitably equipped aircraft, each member of the flight crew must have a current instrument approach procedure endorsement. This includes approved training in how to safely conduct a baro-VNAV operation, including:

So when it comes to GNSS approaches—don’t ‘push your own baro’. If you want vertical guidance, make sure you are properly equipped, trained and that the approach is approved for where you’re going.