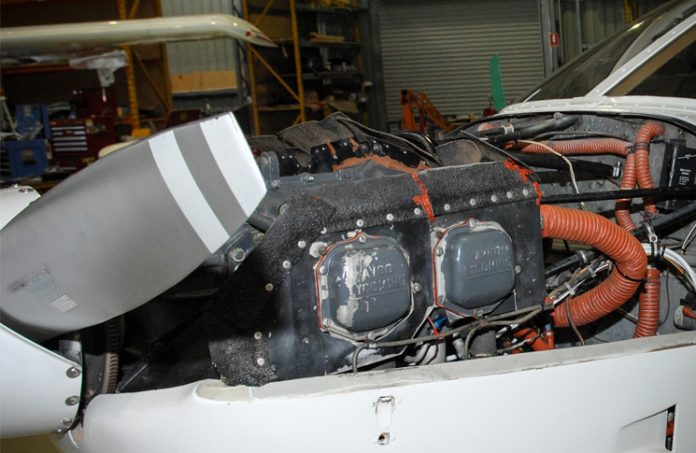 A Piper PA28R-200 Arrow arrived at our facility for an annual inspection and engine overhaul. The work pack was compiled, the engine removed and sent to the engine shop for overhaul. The airworthiness directives/service bulletins research was carried out and no outstanding documents were apparent.

In terms of the bulletin, the Curtis oil drain must be removed and replaced with a Piper part (Number 492172V) and an addition of a decal (Part number 87369-26V) affixed to the engine mount announcing the special Piper drain fitment. This Service Letter 910 (FAA AD 81-11-02) is a one-time inspection/change and had been signed off in the aircraft logbook as complied with some years earlier.

The loophole in these circumstances was when the engine went for overhaul. The engine shop removed the improved Piper part and replaced it with the non-compliant Curtis drain. The engine mount required repairs—after these were done the mount was repainted and the decals were obliterated. The nose gear drag brace bushes were renewed but the NAS 464P4-27 bolt on the knee joint was worn. The engineer replaced the worn bolt with one of the same specification but one dash length longer. The engine was refitted to the newly painted mount and the nose gear was sporting its newly refurbished drag brace links.

The take-off run was normal. Once airborne, the undercarriage was retracted and engine parameters checked. All temperature and pressures were satisfactory. Climb out to the training area some 50 miles away was carried out, oil pressure was noted as slightly lower than expected (down to 60 psi), and no increase in oil temperature—so no action was carried out.

At the top of climb at 8000 ft, the nose was lowered and the RPM should have maintained at 2700. Instead it ran up to 2750, 2800, 2850, 2900. The prop lever was now in the full coarse position, the throttle was retarded and maximum RPM was captured with only 16 inches of manifold pressure. This was not enough to sustain flight. We thought we had a runaway propeller. Oil temperature was at the bottom of the green and oil pressure was down to 30 PSI—all was not okay with the engine.

A pan pan was called and a return to the airfield was initiated. During the return to the field, the hydraulic tappets could be heard getting louder, the oil pressure was now at 0 and altitude was diminishing.

A mayday call was made and a paddock was selected as we did not expect to reach the airfield. At that moment, the engine violently shuddered and seized with the propeller at the 1 o’clock position. A final mayday was called, the cabin door was unlatched, we could hear and feel the landing gear auto-extend, but the ideal paddock, when close to touchdown, could be seen through the grass as a previously ploughed field. We knew our landing was not going to be smooth.

On touchdown, the right-hand undercarriage was torn out, closely followed by the left-hand undercarriage, while the nose gear stayed relatively intact. As the aircraft came to a rough stop a few feet short of an enormous ant hill, the fuel selector and master switch were secured, seat belts removed and a quick evacuation was carried out.

Post-accident damage was observed and fresh, clean oil was seen on the belly all the way to the tail. After the aircraft was retrieved, it was found that under full power the torque of the engine with the landing gear retracted was enough to actuate the oil drain from the nose gear drag brace and empty the engine oil sump. These three overlooked, seemingly unimportant items, were the final hole in the cheese.

Luckily we were able to walk away from the accident without a scratch and much wiser from the experience.