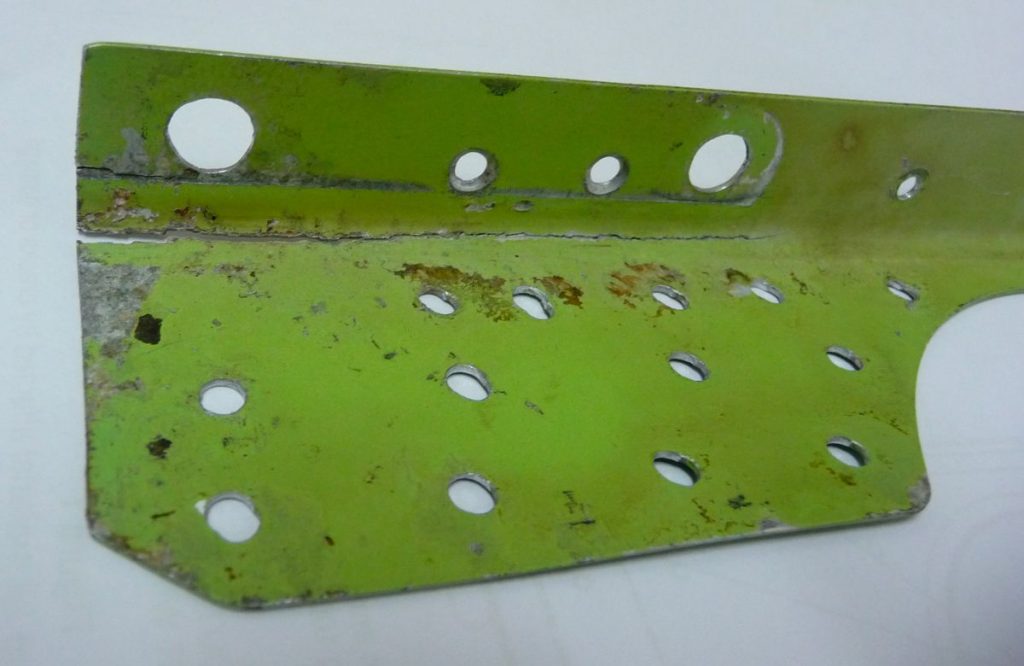 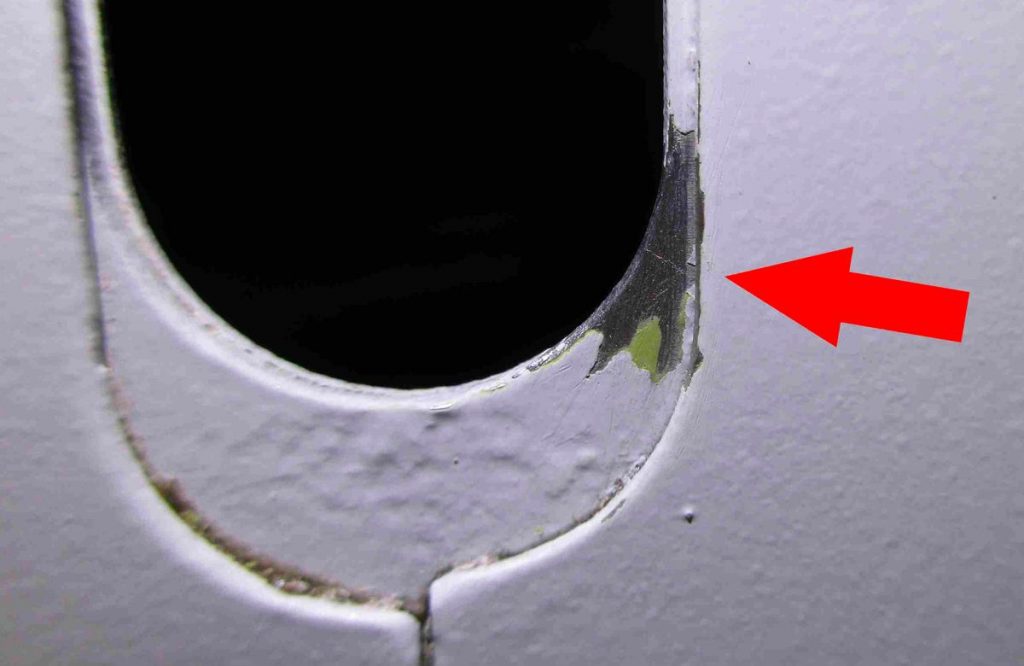 CESSNA 210 N–ATA 5511 HORIZONTAL STABILISER, SPAR/RIB–SPAR–CRACKED. DR 611851504 (image above)
Horizontal stabiliser FWD spar found cracked. Crack is at the lower LH radius of the centre cut out. The spar is a three-layer construction with only the middle layer cracked. The crack is very fine and only has a total length of 0.125″. Repaired I.A.W. approved EO. i.e. stop drill and doubler repair.

SWEARINGEN SA227 AC–ATA 3230 LANDING GEAR RETRACT/EXTENSION SYSTEM–Arm assembly–STIFF. DR 611851567
Pilot reported NLG failed to unlock with landing gear selector in the down position. Emergency extension carried out without issue. Inspections have found that up lock shaft is stiff to operate. After removal of the upper drag brace, it was discovered that there was binding in the up lock hook shaft. Disassembly of the drag brace showed a migrated bushing which may have contributed to the binding. Further disassembly of the arm assembly from the cam up lock show a migrating crack from the securing bolt hole. This crack could be the potential root cause of the binding. The new arm assembly (preferred PN) and a new cam up lock assembly has been installed into the main drag brace. Several nose gear extensions were carried out and with no further evidence of binding. Fleet inspection completed for preferred PN installation.

PILATUS PC12 47E–ATA 5752 AILERON TAB STRUCTURE–HINGE–CORRODED. DR 611851607
During functional check of aileron system, movement of LH trim tab was found not to be in limits. Further investigation determined that the trim tab hinge was frozen. This hinge is lubricated in situ every 100 hours. 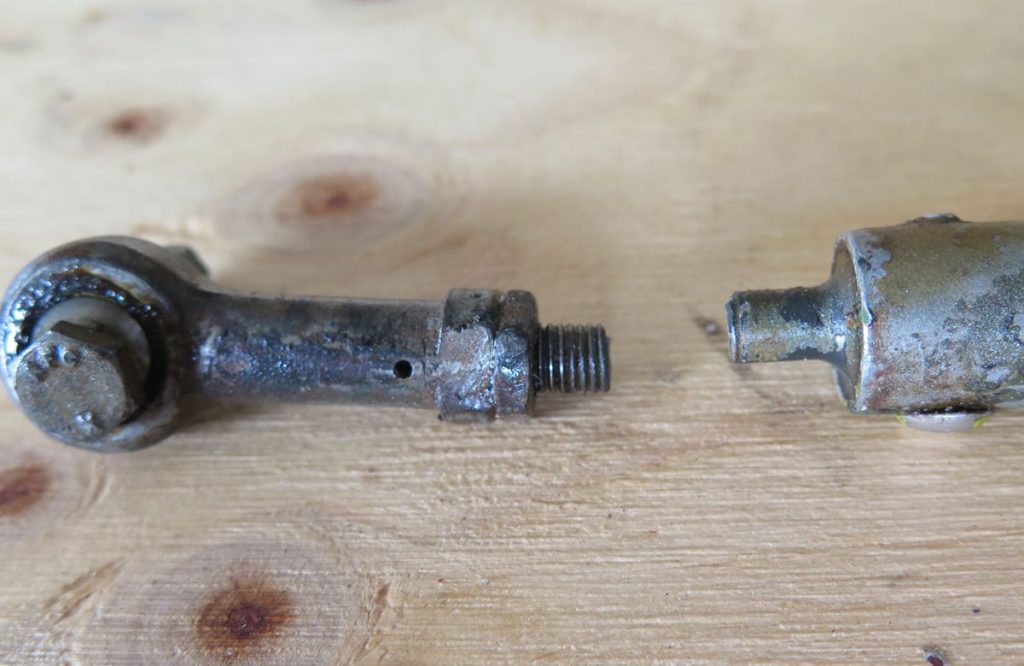 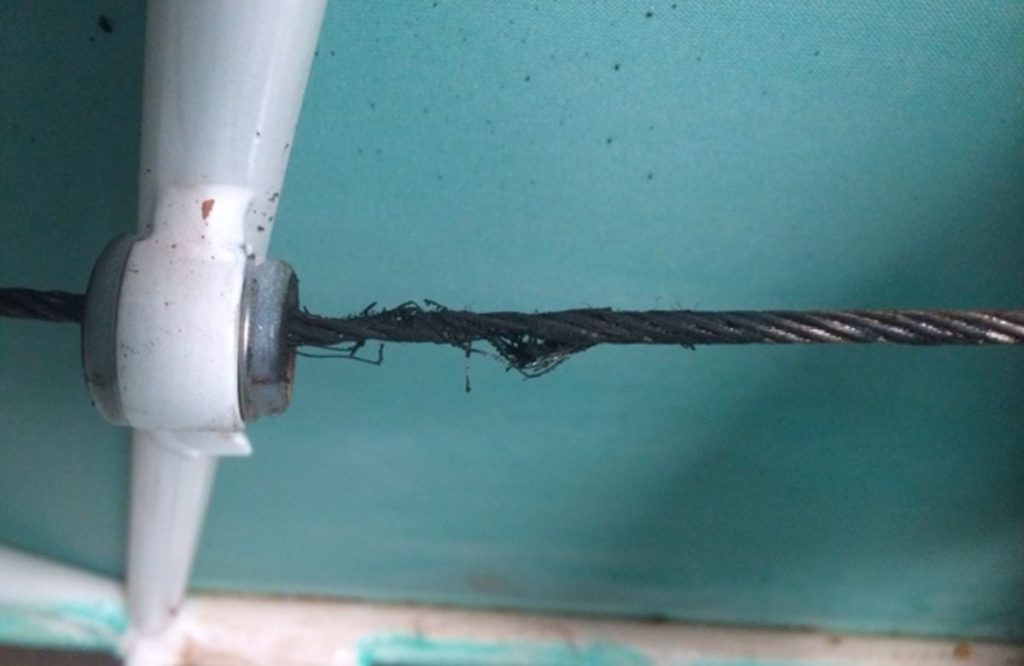 PIPER PA25 235–ATA 2720 RUDDER CONTROL SYSTEM–CABLE–DAMAGED. DR 611851627 (image above)
Damaged rudder cables were noticed after removing turtle deck. Preliminary examination indicated that cables may have been lubricated where they ran through the plastic guide bushes down to the rear sides of the fuselage. Cables were covered in dust which had adhered to the lubricated cables, forming a grinding paste. Maintenance organisation has been notified. RH rudder cable had approx. 60% of the wire strands broken. Whereas LH cable was similarly damaged with approx. 40% of wire strands broken.