Researchers from Massachusetts Institute of Technology (MIT) have proposed a radical method of avoiding lightning strikes on aircraft: put an electrical charge into the airframe.

According to MIT, about 90 per cent of lightning strikes are likely triggered by the aircraft itself: in thunderstorms, an aircraft’s electrically conductive exterior can act as a lightning rod, attracting strikes that can potentially damage fuselage and wing extremities and compromise onboard electronics.

From MIT’s press release: ‘The idea stems from the fact that, when a plane flies through an ambient electric field, its external electrical state, normally in balance, shifts. As an external electric field polarises the aircraft, one end of the plane becomes more positively charged, while the other end swings towards a more negative charge. As the plane becomes increasingly polarised, it can set off a highly conductive flow of plasma, called a positive leader—the preceding stage to a lightning strike.’

Writing in the American Institute of Aeronautics and Astronautics Journal the MIT researchers propose temporarily charging an aircraft to a negative level to dampen the more highly charged positive end, and prevent that end from reaching a critical charge level and initiating a lightning strike.

Lightning, despite its dramatic occurrence is more of a costly nuisance than a hazard in modern commercial aviation. Early jets crashed after being struck by lightning in the 1960s but today aircraft damage is usually confined to aerials, compasses, avionics, and the burning of small holes in the fuselage.

However, newer aircraft made partly from nonmetallic composite materials such as carbon fibre may be more vulnerable to lightning damage than older, all-metal types. This is because composite materials are poor conductors compared to metal and are more subject to sparking and heating when struck. Many composite aircraft include a light metal mesh in the structures to protect against lightning.

Study lead author Carmen Guerra-Garcia told MIT, ‘Modern aircraft are about 50 per cent composites, which changes the picture very significantly. Lightning-related damage is very different, and repairs are much more costly for composite versus metallic aircraft. This is why research on lightning strikes is flourishing now.’ 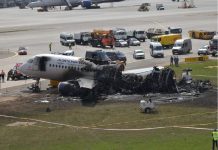