If not for COVID-19, the full details about last year’s landing accident of a Sukhoi Superjet 100 at Moscow Sheremetyevo Airport that killed 41 people would have been made available by now. A news release from the Russian Interstate Aviation Committee (in Russian, abbreviation MAK) says the pandemic restrictions have had a significant effect on the investigation’s completion.

The final report into the crash of Aeroflot flight 1492 on 5 May 2019 will include research from St Petersburg University into how fire started and spread after the aircraft landed. Maker Curtiss-Wright will report on how the aircraft’s fire protection system performed and hardware manufacturer Safran will analyse the performance of the landing gear in the crash and its compliance with design requirements.

The interim report has described how the Aeroflot flight to Murmansk was returning to Sheremetyevo after a lightning strike on 5 May last year, when it bounced on landing. The landing gear broke off during impact and subsequent damage to the engines and fuel tanks led to a sudden and severe fire as the aircraft came to a halt.

There were several thunderstorms in the vicinity of the airport that afternoon and several aircraft preceding  flight 1492 and others departing after it had requested active thunderstorm area avoidance clearance. The interim report says the crew did not request this clearance. However, they did select a heading that turned them away from the storm, earlier than prescribed by the standard departure pattern.

The report describes a ‘sound effect lasting for 1.5 seconds’ recorded on the cockpit voice recorder. ‘Most probably, at this stage, an atmospheric electricity impact affected the aircraft,’ it says.  An ‘emotional exclamation of one of the crew members’ and an audio alert, announcing the degradation of the fly-by-wire system to direct mode, followed immediately after the lightning strike. In direct mode the flight envelope protections of fly-by-wire are removed and the electronic linkages between stick, rudder and control surfaces act as a conventional control system, as using wires, pulleys and rods would do.

Radio communications were briefly interrupted. After they were restored, the crew declared pan-pan and made to return to Sheremetyevo. The captain appeared to have difficulties controlling the aircraft accurately in direct mode, with variations in bank angle and altitude recorded during turns.

The aircraft was 1.6 tonnes overweight—at 43.5 tonnes—on landing. A predictive windshear warning had sounded and the captain pushed the throttles forward late on approach as the aircraft descended below glideslope. The aircraft bounced three times on landing, recording an impact of 5 g on the second and third bounces and detaching the landing gear. Fire  broke out immediately. Only 37 of the 78 people on the aircraft were able to escape. The accident was criminalised, with Sledkom, the Russian Federal Investigative Committee, opening an investigation into the captain’s actions. In April 2020, Russia’s prosecutor general said it would consider Sledkom’s case against the captain.

Video showing the final moments of the aircraft’s landing and the fire and evacuation that followed was made public in April 2020. Distressingly, it shows some passengers taking cabin baggage with them. The interim investigation did not investigate survivability aspects of the crash.

The MAK says its final report will be prepared by the investigation team on completion of all scheduled works. 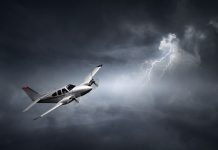 Spark of a good idea