Today marks the start of a nine-day antique air pilgrimage to celebrate the 90th anniversary of the Royal Flying Doctor Service (RFDS). Twenty-five aircraft will take off from Dubbo and fly to Moree, Roma, Charleville, Longreach, Winton, Cloncurry and Julia Creek, before arriving at Mount Isa on 17 May, the anniversary of the first RFDS flight.

The pilgrimage was inspired by the restoration of an original Flying Doctor 1934 Fox Moth. The plane carries the RFDS logo and shows how far the aeromedical service has progressed over 90 years. The final leg of the air pilgrimage will follow the exact route of the first Flying Doctor flight that took place on 17 May 1928—a single engine de Havilland 50 biplane leased from Qantas for two shillings a mile.

Before the Flying Doctor service there was little medical help for people who lived in remote places. If they were injured they had to travel hundreds of kilometres by horse, cart or whatever means were available, to reach a doctor and often died before they got there. The Reverend John Flynn, founder and head of the Presbyterian Church’s Australian Inland Mission, witnessed the daily struggle of these early pioneers living in the bush and had a vision to provide a ‘mantle of safety’ for these people.

In 1917, Flynn received an inspirational letter from Lieutenant Clifford Peel, a young Victorian medical student with an interest in aviation, about bringing medical help to the outback. Unfortunately, Peel was shot down in France during World War I and never lived to see the effect his letter had in becoming the blueprint for the Flying Doctor Service.

On 15 May 1928, Flynn’s dream became a reality after a long-time supporter, H. V. MacKay, left a large bequest for ‘an aerial experiment’ and the money enabled Flynn to set up the Australian Inland Mission Aerial Medical Service (which was renamed in 1955 as the Royal Flying Doctor Service). Two days later, on 17 May, the first official flight piloted by Arthur Affleck and with Dr Kenyon St Vincent Welch on board, departed Cloncurry and flew 85 miles (137 km) to Julia Creek in Central Queensland. In its inaugural year, the Aerial Medical Service flew 50 flights to 26 destinations and treated 225 patients.

Today, the RFDS helps someone every two minutes. It has 24 air bases, a fleet of 69 aircraft and last year alone flew 26,412,555 kilometres—that’s more than 600 flights around the Earth—and treated 336,358 patients. And we have Flynn’s vision to thank for this. 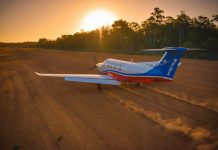 Doctors in the skies