Home Feature Beware of the dogma 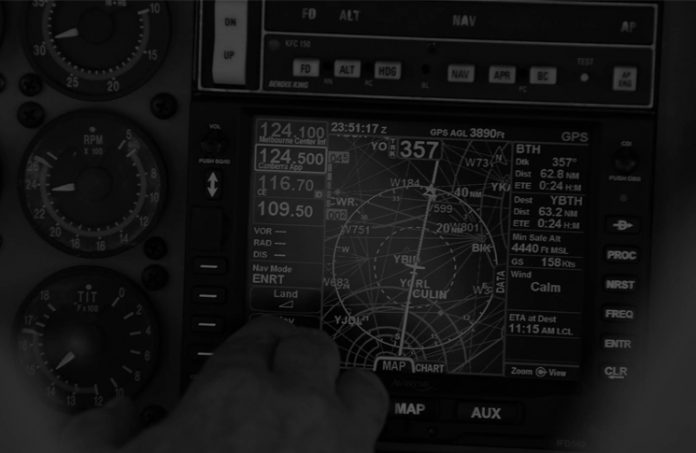 ‘One should be able to control and manipulate experiences with an informed and intelligent mind.’ Sylvia Plath

I make no secret of the fact that I am a visual flight rules (VFR) private pilot who loves technology. Each one of my varied jobs in the aviation industry has facilitated interaction with a wide variety of pilots, and time and time again, I come across two very distinct attitudes amongst private pilots: ‘VFR flying is about dead reckoning, paper charts and technology is OK as a back-up’ or ‘Technology is the best thing since electric flaps and I wouldn’t leave the ground without it’. Having recently encountered dogmatic attitudes on both sides, in statements such as ‘flying with a GPS is cheating’ and ‘EFBs are so good, I don’t turn on the GPS any more’, now seems like prime-time to examine the developing relationship between VFR private flying and technology.

I learnt to fly in 2008, when glass cockpit-equipped aircraft were expensive and EFBs had not yet been conceived. The NDB and the VOR were my primary navigational aids, planning was conducted on paper using a pencil and a Nokia, weather was ascertained by logging on to NAIPS via a desktop computer, or by calling the briefing service. In 2018, 90% of my flight planning is conducted on my iPad. I, like a majority of pilots who learned to fly pre-2010, have been part of the largest technological revolution in aviation since its birth.

As recent events—the Cambridge Analytica news story; the recent Facebook inquiry—have illustrated, the general population is happy to use technology on a daily basis but has scant understanding of its inner workings, repercussions and limitations. Having worked for two companies whose technology is at the forefront of general aviation, I have seen the same pattern echoed in pilots: most are happy to use an EFB and glass cockpit, but have, on average, a limited understanding of their functions and features, and even less of the underlying technology. Like many pilots, I used only around a third of my EFB’s features; until I undertook training to work for an EFB company, I had no idea of the breadth and scope of the app.

Embracing technology need not be a fearful experience, but in order to utilise new information in the safest and most fruitful way, users must have a basic understanding of how the technology works (from a user point of view; I’m not suggesting we need an in-depth understanding of coding or programming). As individuals, we each have a different relationship with technology. The goal is to find what works best for you; not by trial and error, but by informed choice. Understanding the functions and limitations of your EFB, GPS and glass cockpit technology on one hand, and extending (as far as relevant to one’s own flying) to procedures and specifications for performance-based navigation, will enhance flight safety and present the pilot with an opportunity to customise their technology in a way that works best for them.

What are visual flight rules?

Visual flight rules are a set of regulations under which a pilot operates an aircraft in weather conditions generally clear enough to allow the pilot to see where the aircraft is going. Specifically, the weather must be at least the equivalent to the minimum standards specified for visual meteorological conditions (VMC). The pilot must be able to operate the aircraft with visual reference to the ground or water at lower altitudes (below 2000 ft AGL in Australia) and by visually avoiding obstructions and other aircraft.

CASA’s Visual Flight Rules Guide, a guide that takes pride of place in both my av-cabinet of aviation resources and on my iPad’s virtual shelf, lays out the visual flight rules clearly and concisely along with visual meteorological conditions.

Surprisingly, few instruments are required for flight under VFR for private (non-aerial work, non-charter) flying. Instruments that are needed are:

Depending on your level of comfort with technology, and the equipment fitted in your aircraft, other suggestions for onboard tools are: 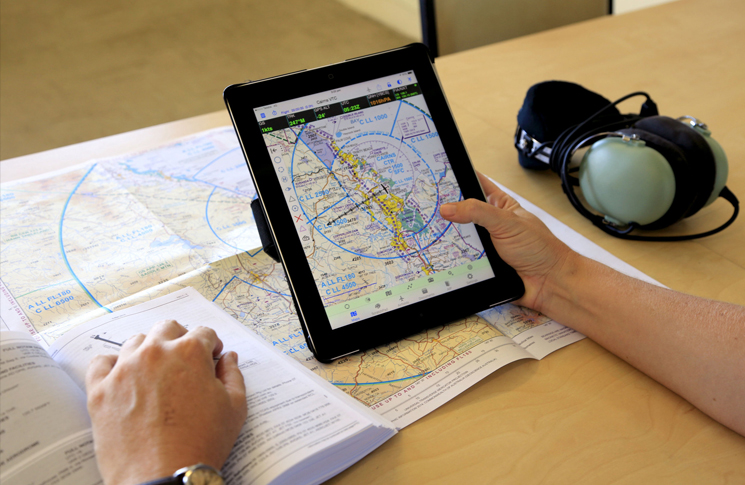 Making the most of your EFB

To fully utilise and customise your EFB, you must first be a competent user of the tablet device upon which the EFB operates. Know how to check your device’s storage and ensure your storage has adequate space for maps and all relevant publications. Delete old forecasts and maps you’re no longer using.

Ensure your tablet’s battery is fully charged before flight, and always have another means of powering it, if and when the battery goes flat.

Understand your tablet’s capabilities. Is it a cellular data model or wi-fi only? Besides downloading weather and NOTAMs and filing flight notifications, this can also affect its ability to get a GPS position.

EFBs store the basic information requirements on the device, so even without cellular data, you’ll be able to view static maps, airfield information, plus make and submit flight plans. However, without the cellular network capability, your EFB is purely a pre-loaded paper replacement, and unless you purchase an additional wireless GPS device, may not provide a moving map display.

We have all been taught when map reading to read ‘map to ground’ and not the other way around. That’s now become ‘EFB/GPS to ground’, but is still a vitally important technique in VFR flying. Features observed on the EFB or GNSS should be periodically cross-checked with features on the ground, and then the aircraft’s position determined from ground reference accordingly. Similarly, in avoiding controlled airspace: do not wait for your technology to warn you you’re approaching CTA; be ahead of the aircraft and know where you’re going, and what lies ahead, at all times.

Your EFB provider’s website is a wealth of information from FAQs, tips, manual downloads, how-to videos and online tutorials and webinars. Look out for live events at airshows, too, where EFB staff are usually on hand to demonstrate the app’s features. 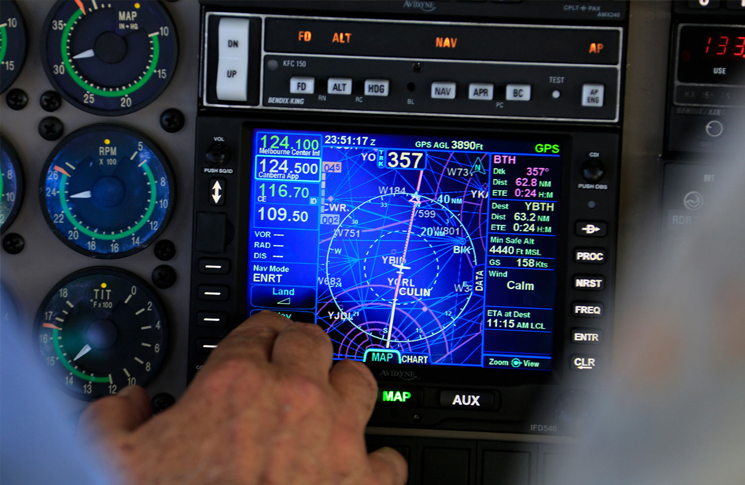 Making the most of your glass cockpit

It’s vital that the appropriate training is given when transitioning to a glass cockpit. Whether you’re flying a state-of-the-art G1000 or a small retro-fitted Dynon, as with your EFB, knowledge is power. While the advantages of glass cockpits for VFR pilots are well documented—precision, system redundancy, synthetic vision, terrain awareness, etc.—the transition from traditional instruments can be, initially, overwhelming. Be sure to spend time with your manual, as well as an instructor well versed on type. Most flying schools offer ground courses on the GPS systems they use in their rental aircraft.

It’s all too easy to decide that GNSS database updates are too expensive and time-consuming for VFR flight … until the day that NRST APT sends you to a freshly plowed paddock, or ATC call to ask why you have flown straight through a new class C step. Whilst an updated database is not mandatory for VFR flight, outdated information can be downright misleading and time is often in short supply when conflicting information is causing chaos in the cockpit. Some VFR pilots update their panel mount GNSS with each AIP MAP cycle, and manually verify all important information, such as waypoint coordinates and navaids at other times. Other pilots simply do the updates at each AIRAC cycle, which makes it easy to switch an aircraft’s use between IFR and VFR. The latter is recommended; if you choose something else, make sure you know whether the information you are using is correct and current.

There is really no excuse not to have EFB data current: the updates that are included in the subscriptions can be conducted by wi-fi in a pilot’s office, or at home.

Many VFR pilots still seem to fly with only the ‘direct-to’ function on their panel-mounted GNSS. That’s a shame, because they are missing out on immeasurable treasures that come with entering a flight plan. Firstly, because the graphics on modern avionics can draw the whole route on-screen, you can quickly monitor progress with just a glance. Secondly, diversions around non-VMC weather can be more easily visualised if the original track is already displayed; and thirdly, it’s a whole lot less work en route, giving you time for eyes-outside, instead of focusing on the panel at critical moments over waypoints or navaids—when there is often other traffic.

PBN, or performance-based navigation, is the new set of navigation specifications on which IFR procedures are built. It specifies the off-track limits for IFR aircraft in en route and terminal airspace, and on approach.

For the VFR pilot, some appreciation of PBN enables good decisions to be made about avoiding air routes and busy waypoints, and visualising where an IFR aircraft might be at different stages of an instrument approach. I suggest grabbing coffee and cookies and going over the IFR routes, waypoints and instrument approach and landing charts (IAL) for airports that you use frequently with a knowledgeable friend or instructor. It’s not necessary to be able to fly them in VFR operations, but that doesn’t make complete ignorance particularly wise.

The other aspect of PBN that VFR pilots really need to understand but that usually gets very little attention, is the scaling of the course deviation indicator (CDI) on panel mounted avionics. We all know that we’re on the course when it’s in the centre, but how far is an aeroplane off the selected course when it’s half-way out to the left? CDI scaling can be very useful knowledge, but it’s complicated: it depends on the type of GNSS in the aircraft (TSO C129 and TSO C146 systems work differently) and whether the aircraft is en route, or in the terminal area. Most flying schools offer GNSS courses for en route navigation and completing one for the aircraft you fly will give you the knowledge to navigate confidently, whilst observing the fundamentals that govern VFR flight. Many people think that using GNSS under VFR should be easier than in IFR flight, but quite often, that isn’t true. VFR pilots staying clear of weather and terrain often need to make numerous course and heading changes and using the GNSS in those situations can need greater skill than many pilots realise. (The same is true of autopilots, by the way.)

Whatever you do, however, always stay in VMC. The sad reality is that despite all the advanced capabilities of technically advanced, glass cockpit aircraft, VFR flight into IMC tragically and unnecessarily claims lives every year.

The joy of VFR

I have a friend who, every now and again, minimises the technology to remind him of the joy of flying VFR. Certainly, EFBs make flight planning swifter and once customised to your personal preferences, are so useful, with their weather overlays, instant airport information and runway wind directions. There’s no doubt that a glass cockpit is a wonderful thing, with its information on how much fuel you will have at your destination, and an integrated autopilot ability to fly a vertical approach. However, there is a certain joy to sometimes hand flying an aircraft; to stretching out three maps across a long table and adding six-minute markers; to simply looking out of the window and recognising the land features inbound to your home airport.