Home Feature Precisely to the point; the promise of satellite-based augmentation 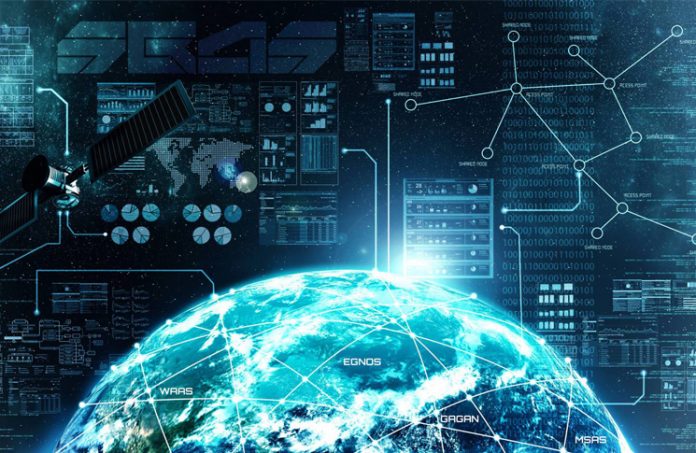 An update to global navigation satellite systems will deliver considerable safety benefits—but you need to understand it to prevent dangerous misconceptions.

For the future of air navigation, look at your phone. You may or may not have noticed, but in some parts of Australia your smart phone’s GPS display is now more accurate than ever.

In simple terms, an SBAS uses ground-based reference stations that compare their locations as derived from GNSS satellites’ signals with their actual, known, locations. This generates correction data which is sent to SBAS satellites from an uplink station (at Uralla, NSW, in the case of the Australian trial). The SBAS satellites, in turn, send their own more precise location signals to users on the ground.

SBAS can increase accuracy to under a metre and precise point positioning technology, which uses geostationary satellites, ground stations and the European Gallileo satellite constellation can achieve accuracy of a few centimetres.

Because your smartphone is not an aviation-certified device it can take full advantage of the Australian SBAS trial’s experimental signal. Whereas before it located you in your street, your phone might now show your location on the couch of an evening when you are idly thumbing it. Certified devices do not help themselves to the SBAS trial signal because the first thing they do is decode the ‘message type 0’ in the SBAS signal which says, ‘do not use for safety applications’.

The recent budget announcement of $41 million for the Australian Space Agency and $260 million to Geoscience Australia for satellite imaging and GPS infrastructure strongly hints that SBAS will move from trial to adoption in the short or medium term.

SBAS will also bring an important gift—vertical guidance. ‘GPS is impressive for lateral guidance, but it was never designed to indicate height with the same accuracy,’ says CASA’s aerodromes and airspace aviation safety inspector Steven Kreusser. ‘SBAS adds vertical guidance to the system.’

As Airservices Australia says, ‘Continuous vertical guidance is one of the most important tools available to a pilot during the final stages of flight. It ensures the crew can maintain a safe height above terrain and obstacles when approaching a runway. In adverse weather, such as low cloud, they can also descend to a lower altitude before needing to make visual contact with the airport. This continuous vertical guidance decreases the chances of a pilot undertaking a go-around or having to divert, saving both fuel and time.’

In the pre-GPS era vertical guidance was provided by instrument landing systems (ILS). Recently ground-based augmentations systems (GBAS) and baro-VNAV, which uses a certified and corrected altimeter to provide altitude information to the navigation system, have been used for vertical guidance. These are, in the main, expensive technologies found on larger aircraft in regular passenger service or at the expensive end of the charter market.

Using SBAS only requires a software feature that is already built into many common TSO-C146a GNSS receivers. This means smaller charter or private aircraft will be able to fly vertically guided approaches—a virtual ILS—without needing to install new avionics.

‘A common basic GPS in use in general aviation at the moment is the Garmin 430. It was also available as the 430W—the W denoting that it’s WAAS or SBAS capable,’ Kreusser says, ‘and it’s the same for the 530 and 530W.’

Low-cost vertical guidance is soon to arrive in general aviation, but some pilots are naively flying as though it’s already here. Their potentially dangerous mistake is to confuse guidance, which comes from equipment meeting strict performance standards, with advice, which does not meet the same standards of accuracy.

Flight Safety Australia has discussed this topic before in an article called ‘When advice isn’t the same as guidance’. Last September we said ‘LNAV refers to lateral (2D) guidance for a GNSS non-precision approach. An LNAV GNSS approach will get an IFR pilot on the correct path, but the pilot must ensure that the aircraft is at the correct altitude at each fix. The aircraft must not descend below the minimum descent altitude (MDA) unless visual.’

‘Some GNSS receivers (particularly Garmin models) are capable of displaying an advisory vertical profile. This is sometimes known as LNAV+V, but there are important differences between this and baro-VNAV.’

LNAV+V is also different to SBAS technology. ‘Without SBAS, heights are known to the system, but only as heights above GPS altitude (the reference ellipsoid) not mean sea level,’ Kreusser says.

When you consider the differences between mean sea level and the GPS ellipsoid plus take into consideration the effect of temperature on barometric altimeters then, depending on where you are in Australia, your height might be higher or lower than indicated on the GPS,’ Kreusser says.

‘The disparities are not huge, but near the ground they could be the difference between a successful approach and an impact. You may be flying a lower approach profile. That’s why it’s called advisory.’

Advice is, however, useful and safety is enhancing for those who are aware of its limits. ‘LNAV+V advisory is a good thing to have and contributes to safety, but you’ve got to know its limitations, and you’ve got to respect the steps in the approach,’ Kreusser says.

‘In short, know your system, learn how it works and get advice on any aspect of it you’re not sure about.’

CNS/ATM satellite-based technology is the future of management of Australian airspace. This resource kit updates and expands upon CASA’s very popular global navigation satellite system (GNSS) resource kit, produced in 2006, and includes the requirements, standards and practices now required for all IFR operations.

The kit is designed for both self and class-based instruction, and comprises a resource guide, workbook and a DVD, covering the following topics: