Home Feature What drone is right for you?

Thinking of getting into droning? Wouldn’t mind spending some time flying an aircraft remotely? Is it as fun as it looks? What’s the best drone to buy these days? Contributor Craig Newlyn investigates.

The past few years has seen dozens of new drones enter the marketplace. This influx has created an endless choice for consumers and makes it difficult to choose which drone to buy and enjoy. With so many drones made for specific purposes, you firstly need to know what type of drone activity you want to do. The two most popular activities are FPV racing or ‘First Person View’ racing and aerial photography.

FPV racing is a growing sport that involves custom building a drone from parts purchased online. Enthusiasts just select an airframe, motors, propellers, electronic speed controllers, flight controller, battery, video transmitter, remote control transmitter/receiver and an on-board miniature camera. You now have all the parts to build the aircraft. Quadcopters are the usual builds, with an airframe size usually around 300 mm wide. These are the fighter jets of the drone world with the camera facing forward to provide a ‘pilot’s view’ when the drone is in flight. The user or remote pilot wears immersive FPV goggles, a headset that has the video feed from the drone in real time sent to the screen on the inside of the goggles. When worn they block out all outside light placing you in the driver’s seat.

The feeling you get is amazing. Flying low and fast around an obstacle course really makes you feel like you are in the cockpit of the drone. Line up against your mates or family and FPV racing is born.

How much you may ask? Well it’s actually quite cheap to go racing FPV. Allow around $500 for the drone and another $500 for the goggles and you can get yourself a pretty decent setup. If you don’t want to build your own drone, no problem, you can purchase pre-built models known as an RTF or ready to fly drones from dozens of places across the internet, and from local RC hobby shops. But there is one thing to consider though … you are going to crash the *%!! out of these things.

On any given day I would go through four or five sets of props and sometimes break airframes learning to control my racer through my FPV goggles. It’s all part of learning to fly them. Even the guys that are experts take a few pre-built drones along on race days knowing the rate of attrition is high. So, you will definitely need some hobby skills such as wiring and soldering to repair your FPV drone, which is why most people choose to build their own from parts.

Please note that under CASA exemption 138/16, flying a FPV drone must take place at an authorised club as a Model Aeronautical Association of Australia (MAAA) member or with a ReOC holder who has approval to fly these drones. You are legally required to have a designated spotter working with the pilot to maintain separation from any hazards under CASR Part 101.

Quadcopters or drones with four motors are again the most popular mid-size aerial photography drones. You might be familiar with brand names such as Parrot, Yuneec, Microdrone or 3DR. GoPro released a quad called the Karma drone; and of course, there is the world’s largest and most recognisable drone manufacturer DJI.

DJI, a Chinese manufacturer, is the most prominent global name in all sizes and types of drones in both consumer and professional markets. Other companies such as Parrot and GoPro have fallen by the wayside.

So, where does that leave us? Like it or not, it’s primarily with DJI’s product range. With multiple consumer and professional platforms offered at various price points, every model they produce seems to have the best performance figures in their weight class, the highest quality avionics and smart sensors, and the best battery life. As they’re also the most stable and easiest to fly they set the benchmark for drone aerial photography platforms.

The cheapest and the smallest in their range is the Spark. Full of automated flight features and obstacle avoidance sensors, don’t let its compact size lead you to think of it as anything but the latest in technology. This little drone allows you to use hand gestures to launch, fly, manoeuvre, land and even operate the drone’s camera. Small enough to fit in the palm of your hand, it is very portable and the perfect holiday aerial camera. Think of it as a flying selfie drone that is best suited to take snapshots when close to you from low heights. It shoots video and still photos and can track and follow you as you walk, run or even ride a bike. The Spark can be used indoors as well as outdoors. In addition to the hand gestures, it can also be controlled by a smartphone app or an RC transmitter and comes in a variety of colours.

The next two drones in the DJI line-up are the Mavic Air and the Mavic Pro. The Mavic Pro was the first of the pair to be released. Both have built-in cameras that shoot video and still photos. Able to be folded up and carried in your backpack, the Pro is slightly larger than the Air which was only recently released in January. Both drones are very easy to use, and both have intelligent flight modes with smart technology such as obstacle avoidance, follow me and other automated features.

The main difference between the two is the higher quality video and photos being captured by the Pro. The Pro’s video bitrate is faster, a plus for amateur filmmakers while the Mavic Air wins out in terms of sensors. That being said, the lessor number of sensors on the Pro is not necessarily a bad thing, it just may suit pilots that have a little more stick time or a higher level of flight skills.

The Mavic Air is pocket friendly, folding up to a size that can be carried in your pocket, whereas the slightly larger Pro, while it won’t fit in your pocket, has a larger battery and therefore a longer flight time. Another great feature of the Pro is that it wirelessly syncs to the DJI goggles with Ocusync. This new technology links your head movement to the Mavic Pro’s flight controls. Look up and the Pro pitches up. Look left to roll left, look down to pitch down and so on. Incredible right? Have a look online at some YouTube videos to see these in action.

At the top of the recreational line-up is the familiar Phantom 4 Pro. Having had years of development and a number of generations and sub generations, the P4 as it is nicknamed is the calling card of all things drone. The 3-axis gimbal camera is simply stunning, providing very high quality, super stable 4K 60 fps video and 20-megapixel images. The P4 lens is better suited for shooting landscapes over the Mavic drones, providing a richer, fuller image especially when the light conditions are slightly low.

Super fun and easy to fly, it can also serve as the perfect bit of kit to fly around the park with the family, practising your control skills, take-offs and landings. Packed with all the automated features and sensors that are built in to the Mavic pair of drones, the P4 has it all—well nearly all. The Ocusync feature is not available on the P4.

Another plus is its durability. It is extremely robust and able to survive most low-impact crashes without sustaining any damage that would stop it from being able to fly again, providing the props are in good order. The classic white design is a shape we all know and love. The landing legs are designed to protect the camera forming a protective cage around it and it’s great for the kids to learn on. I’ve had four- and five-year-olds fly the P4 after only minutes of instruction. Suited for indoor and outdoor use, the optical sensors work independently of GPS, providing a smooth and stable hover even in high-wind conditions. It’s outstanding! The P4 comes in at around $2500 depending on the amount of batteries you buy, while the Mavics are priced under the $2K mark.

Whatever you choose, remember to fly safe, and it’s a good idea to read through CASR Part 101 to brush up on the regs before flying. A must have is the CASA smartphone app called ‘Can I Fly There?’ It’s free to download and uses your GPS position to alert you of any CTA’s or HLS’s nearby that are RPAS no fly zones. Check it out, have fun, enjoy, and safe skies for all. 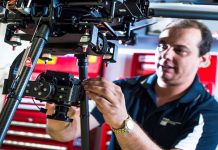 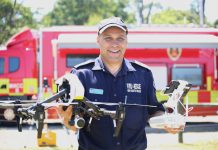 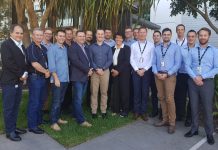