Home Feature Bouncing, not breaking: resilience as the foundation of safety

An engine explodes, peppering the wings and fuselage of a wide-body airliner with turbine fragments propelled out of its core at Mach 2.6. Some systems are eviscerated, some disabled. Of the aircraft’s 22 different systems, 21 are damaged, and 650 wires and network cables are severed. Less than 50 per cent of its electrics and hydraulics are operational but the aircraft stays in the sky and remains controllable. On the flight deck, its crew use the first shocking seconds to take stock of the situation, first determining that the aircraft will still fly.

This is resilience, aviation-style.

The Oxford Dictionary defines resilience as, ‘The capacity to recover quickly from difficulties; toughness.’ It is a concept applicable to piloting, engineering, and management. In the light of modern thinking on human error and just culture there’s a convincing case to be made that a resilient approach is the must-have ingredient for personal and organisational safety.

Resilience can be seen as either a fashionable idea or one whose time has come. The UK Overseas Development Institute reports there was a nine-fold increase in the use of the term ‘resilience’ in published items between 1997 and 2015 across Web of Science, a platform that aggregates outputs from more than 7000 academic and research institutions. Citations of ‘resilience’ increased exponentially from almost zero in 1997 to nearly 30,000 in 2015 and the number of people googling the word ‘resilience’ more than doubled from 2004 to 2015.

Richard de Crespigny has considered resilience at length, since 4 November 2010, the day he and four other pilots on the flight deck of Qantas flight 32 demonstrated resilience in response to an uncontained engine failure of unprecedented magnitude and complexity. 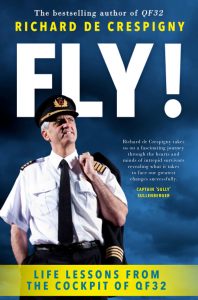 De Crespigny presents his story of aviation resilience to company boards and industry executives in a wide range of organisations around the world. In the process, he learned the best practices from high achieving people and organisations that he compiled into a set of eight elements of personal and corporate resilience.

FLY! is de Crespigny’s latest book with resilience as its central theme. He defines resilience as, ‘the ability to keep control, despite failures, degrade effectively when required, then rebound.’

The Qantas pilot agrees with the analysis of safety thinkers including James Reason and Erik Hollnagel, who argue that resilience is a much more achievable goal for a person or organisation than perfection, which is unattainable.

In The Human Contribution Reason says, ‘Usually the human is considered a hazard—a system component whose unsafe acts are implicated in the majority of catastrophic breakdowns. However, there is another perspective that has been relatively little studied in its own right—the human as hero, whose adaptations and compensations bring troubled systems back from the brink of disaster time and again.’

With David D. Woods, Hollnagel writes, ‘Resilience engineering is a paradigm for safety management that focuses on how to help people cope with complexity under pressure to achieve success. It strongly contrasts with what is typical today—a paradigm of tabulating error as if it were a thing, followed by interventions to reduce this count.

‘A resilient organisation treats safety as a core value, not a commodity that can be counted. Indeed, safety shows itself only by the events that do not happen! Rather than view past success as a reason to ramp down investments, such organisations continue to invest in anticipating the changing potential for failure because they appreciate that their knowledge of the gaps is imperfect and that their environment constantly changes.’

De Crespigny, who focuses on personal and corporate reslience in FLY!, says that while reslience is a more achievable goal than perfection, it is not much easier to achieve. Developing resilience requires a lifetime of learning and deliberate practice.

‘Resilience, like a muscle, is something you build and maintain, not something you are born with,’ he says. ‘Hard effort builds it and laziness lets it fade away. It is something you must continually work on because our world is constantly evolving and a complete understanding of the knows and unknowns is always outside our grasp.’

Knowledge involves elements as disparate as appreciating the difference between the conscious ‘slow’ part of the brain and the unconscious ‘fast’ part, as well as detailed and up-to-date knowledge of the task at hand.

Training involves commitment to a lifetime of learning. Training rather than operations is the place to push the limits to the point where you fail. Taking example from virtuoso musicians, de Crespigny extends the concepts of deliberate practice to create ‘stress-proof deliberate practice (SPDP)’ where expertise can be delivered on demand in any stressful situation, especially during a crisis.

Experience is a resource to be maximised. Like any resource it must be continually improved. Laziness, complacency and staleness are the downsides of long experience—which is why de Crespigny explains that experience can be a curse. Normalised deviances and automation amnesia are the hallmarks of an insidious drift to failure. Creative destruction (clearing the old information to make way for the new), a lifetime of learning and focused SPDP are keys to achieving expertise then eminence.

Teamwork is important because a team will always out-perform its individuals alone. ‘Teams monitor each other, detect errors, pool their knowledge to plug knowledge gaps and offer different perspectives, meaning teams will be more creative and make better decisions in novel situations,’ de Crespigny says.

Leadership is a vast subject, but its importance can be hinted at in two sentences. ‘The leader doesn’t set the culture. The leader is the culture,’ de Crespigny says. For aviation, de Crespigny favours the leadership example found in high-reliability organisations that ‘defer to expertise’, where leaders assign critical tasks to those best able to accomplish them, trusts that person’s judgement and then leaves them alone to do the tasks rather than distracting, micro-managing and overriding them.

Crisis management is important to protect both organisational and personal reputations, and to minimise the trauma a crisis can cause to an organisation or person. Its basic principles are speed, honesty, communications, openness, disclosure, empathy and care—attributes that must be built and nurtured before they are called upon.

Decision making involves being aware of your basic values and goals, understanding the often-unconscious biases that affect perception and decisions, and developing the confidence to make decisions under difficult circumstances rather than be paralysed by indecision and fear. De Crespigny writes, ‘never change a technical decision for emotional reasons’.

Risk involves acceptance of risk in our lives as the cost of change and survival. It is important to understand the difference between risks and gambles and threat and error management. Never accept a gamble that threatens your life.

Your flying, or your life might never encounter a crisis like QF32, (although as the poet Henry Wadsworth Longfellow said, ‘into each life some rain must fall’). But de Crespigny says resilience building is important regardless. ‘The same resilience that lets you get through the bad times lets you thrive in the good times.’