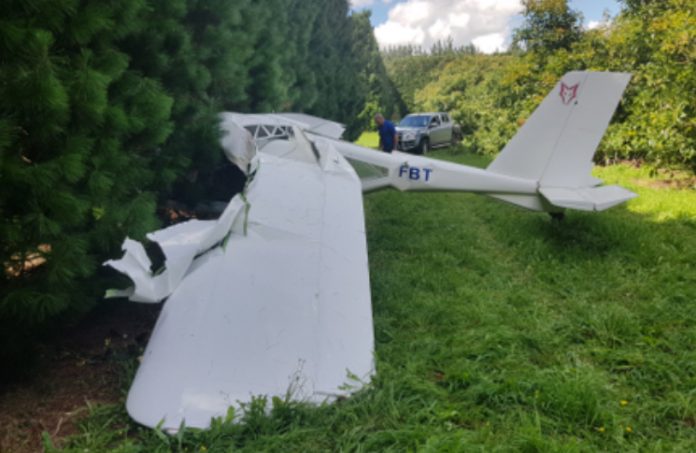 I had just completed my RA-Aus cross country endorsement when I ventured across the Tasman for my annual visit to catch up with friends and relatives. While staying with my sister I decided to check out the local flying club and organised to go up with the chief flying instructor (CFI). Upon arrival at the club I found a friendly bunch of people and a very relaxed atmosphere. It wasn’t long before I was ushered into a Foxbat and following a quick orientation (I had previously only flown Tecnams) we were taxiing out to the crosswind runway. With the CFI doing all the radio calls I could concentrate on getting used to the new aircraft which was just as well because the following hour of flying was the most exciting and challenging I had ever done.

First stop was a club member’s house in the hills with a short grass strip (or should I say driveway) which led up to the house. This required a straight and level final approach with good throttle control which was something I wasn’t used to. I was given plenty of help from the instructor next to me but despite being a dual control plane there was only one throttle control next to my thigh, which seemed a bit awkward and touchy (this was to be a crucial factor the next time we went flying). Next we headed across the harbour to try some beach landings and after performing a couple of ‘beach circuits’ we were joined by another club member flying in close proximity along the coast. Next stop was a local farm with a small strip to practice simulated engine failure landings. I noticed the Foxbat was quite sluggish climbing out with two heavy males in the cockpit and I had to pick a good line to avoid the various terrain obstacles which included trees, powerlines and surrounding hills. We finished off with low-level flying at 50 ft over the harbour mangroves and after we landed, I couldn’t wait to book another flight.

Two days later we ventured up again, but little did I know we wouldn’t even make it back to the airport this time. It was more of the same including simulated engine failures and a different grass strip in the hills to help me work on my throttle control. The final challenge was to be a makeshift landing strip which was basically an access way inside an avocado orchard, which was owned by a club member who had previously owned the Foxbat. I could hardly see the strip from the air and my instructor advised me that there was no ‘going around’ as there was a shelter belt of pine trees at the end of the short grass strip, which had a moderate uphill incline and was flanked by trees on either side.

We managed two landings with less help from my instructor on the second one before having a chat to the owner of the property who sounded like an experienced aviator. His advice was do a couple more landings and ‘sink in’ over the trees on final with full flaperons and no power, then add some power to help bring the nose up just prior to touchdown. I had been taught to use some throttle with a full-flaps approach and then cut it prior to landing, but in theory his technique made sense and we had practised forced landings with full flaperons and no power.

I was given the option to do ‘one more’ by my instructor and of course I took it. In no time we were making a perfect approach, but my previous training kicked in and I added a bit of throttle, only to be told by my instructor to hold back. It felt like we were definitely ‘sinking in’ and once we descended below the pine trees the thing seemed to drop like a stone.

I do remember adding some throttle prior to hitting the ground but it was too little too late and had no real effect on the plane’s attitude. The inevitable ‘bounce’ occurred which may have contributed to my increased throttle application, or maybe it was just a delayed and slightly panicked overreaction on my part using that touchy throttle.

The Foxbat lurched up and became airborne again, heading straight for the trees on the right side of the strip. At this point the instructor took over but, in an effort to avoid the trees we found ourselves in a steep bank to the left with the nose pitched towards the ground. In a split second it became apparent we couldn’t regain control and as I came to the realisation we were going to crash, braced for impact.

Luckily for us the left-wing root ploughed into a small avocado tree and significantly softened the impact (and possibly saved our lives). As the left fuel tank ejected out of the crumpled wing, we continued on an airborne trajectory diagonal to the landing strip and straight toward a row of pine trees which formed part of the shelter belt.

Having been incredibly lucky with the first impact it was time to brace for a second impact! Our guardian angel didn’t dessert us and as we impacted the pine trees, the nose of the Foxbat went straight in between two tree trunks as the out-of-control plane abruptly came to a somewhat gentle halt. My instructor sat in silence for a moment and I gestured for a quick exit from the cockpit via the right door, as the wing damage prevented me from exiting my side and I could see fuel leaking from the left fuel lines.

Having safely exited the plane I felt stunned, but we were both uninjured and left to contemplate what had happened and what could have happened!

Immediately following the accident, I think we were both just relieved to walk away unscathed, but as a pilot I felt terrible and had to say sorry for what had happened. The last goal you want to achieve as a newly qualified pilot is to crash land and destroy a perfectly good plane. The property owner ushered me into his house for a hot drink and tried to comfort me with a story about his own flying accident which from memory involved a two-stroke engine failure on take-off, but that was different. My accident was purely due to human error.

So, what lessons did I learn? Harness seatbelts fitted to the Foxbat certainly contributed to us walking away from the accident and should probably be fitted to all light aircraft.

Flying with an instructor can give you a false sense of security about what your limitations are as a pilot. While this may be handy when you’re first learning to fly, the landing I was performing was at the limit of my capabilities and not something I would have done solo. Obviously the closer you are to your limits (especially with landings where timing is so important) the higher the risk of an accident.

On reflection I believe contributing factors (apart from pilot error) may have been: