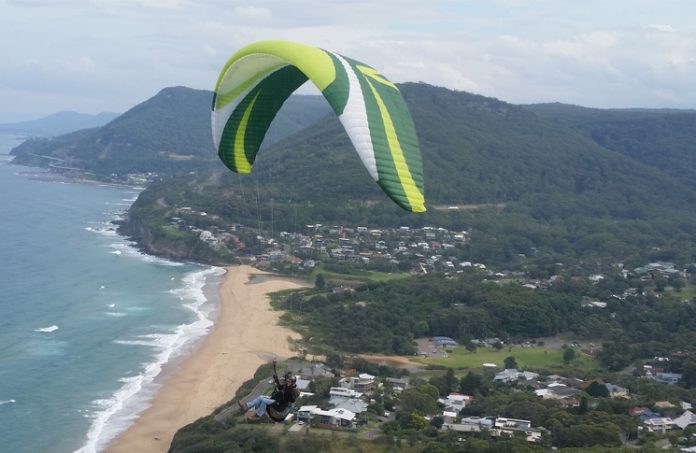 As a newbie paraglider pilot at Stanwell Park in 2006, a part of my site induction was a story of an incident some years before when a large number of pilots were caught out by a freakish gust front. Several were able to run north up the coast and land on remote beaches while others were blown over the back into tiger country. Three suffered significant back injuries. The instructor’s point was that whilst Stanny is a fairly benign coastal site, it can turn nasty at the drop of a hat.

Shortly after listening to this story, I did experience a similar but much weaker front and managed to land my ENA wing on the beach. My situational awareness at this stage was not too well developed and my school glider was a fairly lethargic performer.

Fast forward to February 2018. I have now been flying for 12 years, my situational awareness has improved out of sight and I am how flying a high ENC wing with heaps of performance.

About five pilots including myself had flown north from Stanny but being aware that conditions further south were increasingly stronger we all decided to head back to launch. The wind was 11–12 knots from the south when we got back and having landed in these conditions numerous times before, I attempted a top landing but was a little surprised by the strong lift in front of the landing area.

I flew back out towards the sea with the intention of losing height for another attempt when a mate on the hill called out that it had now increased to 14 knots. It was time to head to the beach, with the other guys a couple of minutes in front of me. At about 180 metres above sea level (ASL) I applied half speed bar and had a ground speed of 10–11 km/hr. As I approached the north end of Stanwell Park beach, I went to big ears to get rid of some height before setting up my approach. At this stage there were very few white caps on the water as would be expected for that wind speed.

Within five seconds or less of going to big ears I was hit by a gust that was estimated at 20–22 knots and was blown up and back to the landing area. I had let off big ears and was on full speed bar but not penetrating at all. Eventually, I was standing on the speed bar and at an altitude of 320 metres. At its peak I was actually drifting back towards the tiger country with wind speed estimated at 30–32 knots.

During lulls I did manage to get some forward penetration but lost it all and ended up back over the landing area when I attempted big ears again. Why? It was a bad move! Needless to say, no more big ears!

My only other options were to turn and go for the tiger country or persist with full speed bar and attempt to get in front of the point and run up the coast as had happened years before. The tiger option was quickly ruled out as, even at 320 metres, I didn’t have enough height to get over the back and if I did the rotor would have been horrendous.

For the next few minutes I inched along the road with trees and power lines behind me, about five metres above the ground. Finally, I was getting a little bit of penetration and set my mind to land on either the road or on the large roundabout that was the entry to the public carpark. Other club pilots were preparing to block the road if necessary.

Over the roundabout and about three metres AGL, I went off speed bar and into the hang position in preparation for landing. Instantly I was again blown backwards, and my left-wing tip caught a concrete lamp post. As the right tip came around, I was able to grab a hold of the lamp post and hang on for dear life. Another successful top landing!

Help in the form of a ladder arrived shortly after and a slightly shaken pilot made it back to terra firma, wing intact. It was later pointed out that the lamp post was about four metres in front of a power pole carrying 60,000 volts.

In all, the incident from start to finish was about 20–25 minutes.

I knew I had to get back on the horse so on the next flyable day, I was back in the air. 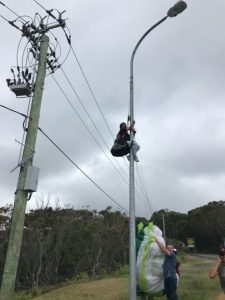 image: Stanny from the air

Sometimes you will just be in the wrong place at the wrong time.