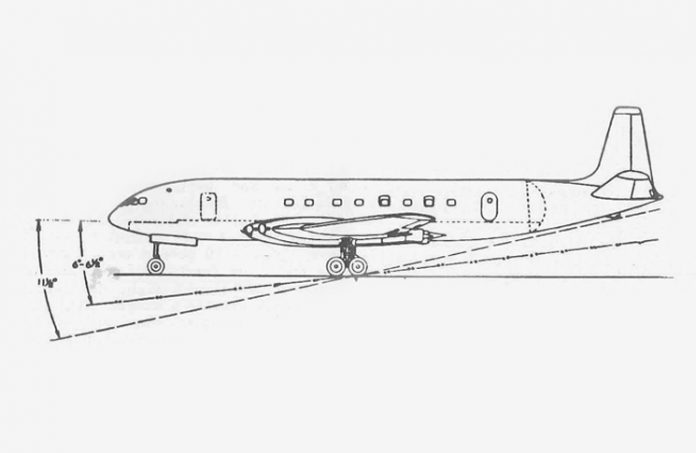 While taking off from Ciampino Airport, Rome, the speed of a Comet failed to build up and after becoming airborne for a few seconds, the captain, acting under the impression that there was a lack of engine thrust, decided to abandon the take-off and throttled back the engines. At the same time, the aircraft hit an obstruction a short distance beyond the end of the runway and finally came to rest near the airport boundary.

The Comet scheduled passenger service to Johannesburg is made via Rome and Cairo. Flight No. 115/030 departed from London Airport on 26th October, 1952, at 1358 hours and arrived at Ciampino Airport at 1637 hours. The total traffic load was 4463 kgs. The flight was made without incident and an entry in the technical log of “No Defects” was made by the captain. At Rome, four passengers disembarked and five joined the flight and the total traffic load for the stage to Cairo was 4703 kgs. The aircraft was refuelled to a capacity of 17578 kgs and a departure check made; there were no defects. On completion of the traffic and control procedures the engines were started and at taxi clearance, together with an amended wind speed and direction, were given by Flying Control. The aircraft was taxied to Runway 16 and lined up on the centre line; all pre-take-off checks were made and the elevator, aileron and rudder trims were set at the neutral position. The captain’s estimation of runway visibility was five miles but with no horizon. The flaps were lowered to 15° and the windscreen wipers were both operating. The engines were opened up to full power and the isolation switches were set to “Isolate.” The r.p.m. were checked at 10,250 on all engines; fuel flows, engine temperatures and pressures were reported to be correct. The brakes were released and the aircraft made a normal acceleration. At an I.A.S. of 75-80 kts. the nose wheel was lifted from the runway and a slight tendency to swing to starboard was corrected. At an I.A.S. of 112 kts. the captain lifted the aircraft from the ground by a positive backward movement of the control column and when he considered that the aircraft had reached a safe height he called for “undercarriage up”. At about the same instant the port wing dropped rather violently and the aircraft swung to port; the controls gave normal response and lateral level was regained. At this point the captain felt that the aircraft’s speed was not building up, although he made no reference to the A.S.L A pronounced judder was felt which he associated with the onset of a stall and in spite of two corrective movements of the control column the judder continued. Before the first officer had time to select undercarriage up, the aircraft came down on its main landing wheels and bounced. It was now plainly evident to the captain that the aircraft’s speed was not increasing and he was convinced that there was a considerable loss of engine thrust. He was also aware that the aircraft was rapidly approaching the end of the runway and a decision to abandon the take-off was made. The undercarriage struck a mound of earth as he was closing the throttles and the aircraft slid for some 270 yards over rough ground and came to rest within 10 yards of the boundary fence. The main undercarriages were wrenched off and considerable damage resulted; a large spillage of fuel occurred but fire did not break out. One passenger suffered slight shock and another sustained a cut finger.

Subsequent interrogation of the crew confirmed that all engines had given their maximum power and that fuel flows, temperatures and pressures had all been normal during the take-off. It was the belief the first officer that the nose wheel was lifted from the ground in the usual manner although the control column appeared to be “a fair way back.” He also thought that the “unstick” was made by moving the control half way back from the neutral position and that it was held there until the port wing dropped. He also stated that he was unable to determine the attitude of the aircraft after the bounce as no runway lights were visible to him.

Due to darkness and due also to the rain no ground witness had a clear view of the take-off. One, however, who observed it from a point opposite the half way position of the runway, considered that the aircraft’s attitude was “critical” as it passed him. He continued to observe it as the nose was exceptionally high arid he was not aware that the aircraft became airborne.

An inspection carried out at the scene of the accident showed that large spillage of fuel from the port wing integral tanks had occurred but fire did not not break out. Both inertia switches had tripped. The two crash switch operating levers. Functioned correctly and the methyl bromide fire extinguisher bottles had discharged. The seats and their attachments in the crew and passenger compartments were undamaged. The crew’s forward entrance door and the passengers’ entrance door functioned normally, as did also the emergency hatches. The flaps were in the lowered position of about 15° and this corresponded to that medicated in the cockpit. The elevator, aileron and rudder trim indicators were in the neutral position. Wheel marks on the runway showed that the main landing wheels had been in contact with the runway over the last 30 feet of its length. The next contact was made on two mounds of earth; when this occurred the undercarriages, were wrenched off and parts of these units damaged the tailplane part of the brake hose was lodged in the tailplane. The port front main wheels ran forward and struck the ILS van with force. The port main plane hit the runway direction indicator which is mounted on concrete blocks and the wing tip and pitot head were torn off. The starboard inner engine steady strut had become detached at its forward end when the attachment bracket rivets had sheared due to impact forces. This detachment allowed the engine to rotate on its mounting trunnions through the mainplane skin and in a nose down direction. The nose wheel was forced upwards into its housing and the tail bumper unit was torn from the rear portion of the fuselage. The bumper attachment showed that the shoe was missing and that the bracket was deeply scarred. A search made along the runway revealed evidence of tail bumper marks which varied in length from 3 feet to 40 feet. These marks extended along the last 650 yards of the runway and showed that the aircraft’s track was inclined a few degrees to starboard of the runway centre line.

The B.O.A.C. Training Manual recommends the following take-off technique: “At 80 kts. the nose should be lifted until the rumble of the nose wheel ceases. Care should be taken not to overdo this and adopt an exaggerated tail-down attitude with a consequent poor acceleration.”

The normal fuselage incidence during the take-off ground run is about 2°- 3° after the nose-wheel has been raised just clear of the runway. To achieve this a backward stick movement of about 4 inches is required which is then reduced to 1 ½ inches. The attitude at “unstick” is approximately 6°- 6½° and to attain this the required stick movement at the time of leaving the ground is of the order of 6 inches back from the neutral position after which the stick must be returned towards the pre-take-off position.

Take-off tests by the manufacturers have shown that a constant 6° incidence of fuselage during the ground run gives good results for distance run and for climb-away behaviour. They have also shown that an increase of incidence to 9° results in a partially stalled wing inducing high drag which appreciably affects the aircraft’s acceleration, and that the symptoms are noticeable to the pilot as a low frequency buffet. The aircraft recovers from its semistalled position if the nose is pushed well down.

It was the opinion of the investigators that the accident was due to an error of judgment by the captain in not appreciating the excessive nose-up attitude of the aircraft during the take-off.

On 3rd March, 1953, while on a ferry flight to Australia a D.H. Comet crashed on take-off from Karachi, Pakistan.

Initial reports indicate that the circumstances of this accident are similar in many respects to the Comet accident at Rome referred to above.

Details of the Karachi accident will be published when they become available.