In the late 19th century, a Polish ophthalmologist named L. L. Zamenhof created a universal second language called Esperanto. His goal was to foster communication and international understanding by developing an easy and flexible second language.

Esperanto is spoken by around two million people worldwide and is surprisingly popular in China. Like many native English speakers, it’s been a personal goal of mine to learn a second language, something at which I have never succeeded (despite growing up in Wales).

Or so I thought.

I’ve come to realise that aviation is its own language, and in its way, it’s a kind of Esperanto: although primarily the international language of aviation is English, for many, including native English speakers, aviation is a second language, containing new words, formal procedures, specific pronunciations and a multitude of abbreviations. It only takes one flight with a non-pilot to realise how much acronym we speak: TAF, QNH, VOR, EFB, ERSA, ATC, OCTA, etc.

If aviation is a language, then it has two levels of comprehension: VFR and IFR. As a VFR pilot, the language and procedures of instrument flying have always intrigued me: LSALT, sector entry, missed approach, RNAV, holding pattern, etc. Being of a curious nature, and with a permanently optimistic ideal of achieving an instrument rating myself one day, I decided to spend some time in the right-hand seat with instrument-rated pilots. It was during this experience that I realised that every VFR pilot would benefit enormously from speaking and understanding a bit of IFR.

One of the most obvious distinctions between IFR and VFR is in the flight planning stage, with some flying schools offering different planning sheets and EFBs offering two tier levels of subscription for IFR and VFR.

Flying VFR doesn’t mean you can’t prepare a detailed flight plan for every flight, filing it with a NAIPS flight notification, rather than as SARTIME-only. This facilitates entry to controlled airspace, flight following and rapid assistance if things go wrong. I have lost count of the number of air traffic controllers who have told me in interviews that filing a flight plan, regardless of flight rules, improves flight safety tenfold.

When preparing for a flight, consider the published lowest safe altitudes when planning cruising levels. You can fly visually, perfectly safely, clear of terrain below the LSALT almost everywhere, but being above the LSALT adds an extra dimension of protection to your flight. It’s possible to use your EFB to calculate LSALT, even when there isn’t a published one.

When planning a long trip, consider using a methodology similar to the IFR for alternates: for VFR flight, the weather is the principal issue, although navigation aids and lighting can matter too, and especially at night. For the weather, IFR pilots consider the cloud base, visibility and crosswind for landing. For a VFR pilot, much the same logic can be applied: is the cloud base high enough to permit a safe departure, VFR flight to the destination, and then a circuit on arrival? For example, if a coastal aerodrome elevation is 98 feet AMSL, the circuit will be flown at 1100 feet and an overflight, 500 feet above, may well be necessary to sight the windsock and establish circuit direction.

While it’s legal to fly VFR clear of cloud below 3000 feet AMSL in Class G airspace, that may not be safe if there are surrounding hills—so an experienced VFR pilot might adopt an alternate minimum of 2500 AGL. If a cloud base less than this is forecast, the flight doesn’t proceed unless there is an alternate aerodrome with much better weather conditions en route, or not too far away. Similarly with visibility, the legal VMC criteria, in the same situation, of 5 km (think of it as five runway lengths, or just being able to see the runway from a three-mile final), may not be safe in some circumstances and locations, so many experienced VFR pilots make plans for an alternate if the visibility is forecast to fall below 8 km.

Remember, the purpose of alternate planning is to ensure that you have a sensible, workable back-up plan, and the fuel to support it, if things don’t turn out as you might have preferred.

Approaching the weather with as much detailed information as possible is a favourable approach regardless of the flight rules under which you fly.

Knowing how to read TAF, TTF, METAR (SPECI and routine), GAF, GPWT, AIRMET and SIGMET, can significantly increase the safe outcome of your flight. Using detailed weather information to your advantage, especially when conditions are changing may mean the difference between completing the flight or not.

Understanding how to apply the ‘dew point spread x 400’ rule to calculate the cloud base when cumuliform clouds are present is an old trick taught to IFR pilots. Take the dew point from the AWIS or Area Briefing, subtract it from the dry bulb temperature and multiply the difference by 400 to calculate the base of the cloud, for example, if the temperature is 21, and dewpoint 14, (21-14) x 400 = 2800 feet, which is the likely base of cumulus cloud.

Airframe icing, on its own, shouldn’t be a problem for VFR flights (except in some rare circumstances) but knowledge of the freezing level can aid in understanding the weather environment. Higher temperatures detract from climb performance in naturally aspirated piston engine aircraft, so if the freezing level is way up in the flight levels, don’t expect stellar climb performance in such an aircraft at maximum weight for a climb to 9500 feet. If the freezing levels are very low, consider the likelihood of frost, or icy pavements. Realistically, very low freezing levels in Australia (say, below 5000 feet) are often accompanied by low cloud and should be an indicator to study the forecast carefully, even for VFR flight.

Always understand and know how to use all the equipment you have on board, regardless of your flight rules: GPS, VOR, ADF and radio equipment. If you’re flying in a sophisticated aircraft, take the time to learn the advanced features (such as traffic monitoring, coupled autopilot, weather detection and synthetic vision). Study the manual so that you can recognise the functions and purpose of the approach capabilities, even if you don’t use them. Learn to use the GPS to the full extent of its functions, especially flight plan entry, proper use of direct-to, re-joining a planned course, understanding RAIM and integrity, integration with other cockpit displays such as PFD or MFD and database content and currency.

Conversely, if you’re flying an older aircraft with an ADF, it’s worth understanding it—you don’t have to be able to fly approaches, but knowing how to fly headings to maintain a constant ADF track, and the difference between bearings and radials, can be valuable.

Keeping your altimeter QNH current, whether flying locally or on long travel flights, is a tip I learnt from an experienced IFR pilot. When requesting Area QNH, inform ATC of your location and destination or intentions. Taking the time to learn how to use Flight Following properly on travel flights can make things much easier. When using Flight Following, don’t change frequencies, altitudes or tracks without advising ATC.

VFR pilots who routinely listen out on the area frequency are rewarded with useful information about nearby traffic and often enough, conditions ahead. It also means you can respond if ATC issue a hazard alert, particularly in relation to traffic that you have not yet sighted.

Learning how to give departure and position reports, especially if flying over water or through remote areas can help, especially when broadcasting in busy areas; however, make sure you make it clear in the broadcast that the flight is VFR.

When responding to an IFR aircraft that may be conflicting traffic, be clear about your position in relation to a waypoint that will be known to an IFR pilot. ‘Tracking back into the 11 downwind from Curlewis’ probably means nothing to an IFR pilot, but ‘10 miles south of Gunnedah, inbound, 3500’ is unmistakeable about your intentions. Inform the IFR traffic when entering the circuit and always in accordance with the recommended procedures for Class G aerodromes.

At your local airport, make an effort to become familiar with the instrument approach tracks. Then, when you hear an IFR pilot report ‘on the 23 RNAV, 7 miles’ or ‘in the holding pattern, 5200’ you’ll have a reasonable idea where to look. Bear in mind that an aircraft on instrument approach will be around 1000–1500 feet above its approach minimum at 5 miles, which will probably put it close to circuit height at that position and an almost certain conflict for a VFR aircraft on downwind.

When using Special VFR, it’s vital you’re across the applicable rules and be ready to speak up if the cloud or visibility worsens. Entering IMC when VFR is a potential death sentence, and still one of the major causes of aircraft accidents. When flying under Special VFR, the ensuing disaster will unfold even more quickly—there is no such thing as instrument visual flight! At a Class D control zone, expect your Special VFR clearance to be cancelled if an IFR aircraft arrives, or is ready for departure. In these circumstances, the safest course of action is usually just to land and wait for the IFR aircraft to clear the area.

In marginal VMC, knowing which way to turn if cloud or deteriorating visibility arises quickly will enable you to seek better visual conditions fast. If there is no possible ‘Plan B’, the weather is probably unsuitable for VFR flight.

Finally, bear in mind that flying VFR does not mean unprofessional or less safe; indeed, it can be argued that the greater flexibility of VFR flight makes the need for pilot professionalism, expertise and skill even greater.

There are days when it is safer to fly VFR than IFR. When there are more than isolated thunderstorms, VFR sometimes works better, since the VFR pilot never enters cloud and is able to remain clear of the storms, associated rain, traffic, terrain and airspace restrictions visually. Checking the freezing levels can also significantly improve the chances of flying VFR on days when instrument pilots may stay on the ground. For example, when freezing levels are very low, it can be difficult to find an altitude above the LSALT and acceptable to ATC to cross the Melbourne control area under IFR: but under VFR, there will be other options.

A safe flight begins with a detailed plan, continues with a pilot’s ability to be flexible and able to adapt, and ends with everybody safe on the ground. Whether you’re VFR or IFR, proficiency in the language and rules of aviation will enhance the safety of your flight.

And, as they say in Esperanto: scio estas potenco—knowledge is power.

Online shop:
Monitor your risk of carby icing using this laminated A5 chart. Reverse side features a list of fast facts. Visit: shop.casa.gov.au and use code SP106. 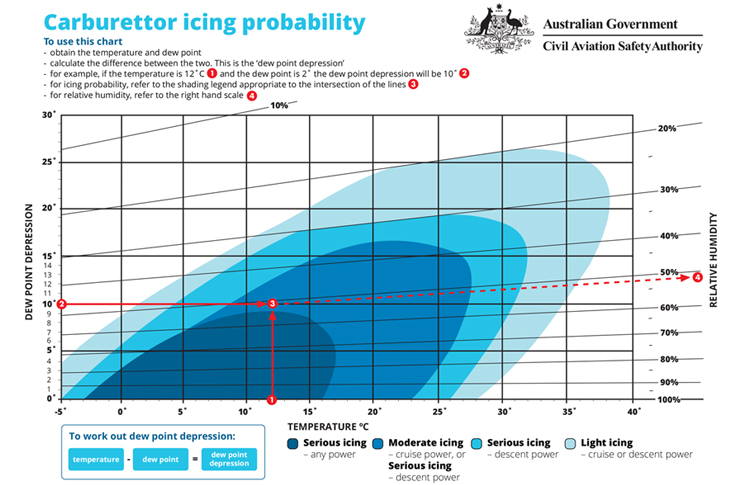