The rapid and total destruction of a night freight jet is a grim reminder of the high level of systems knowledge expected of aircrew in the modern glass cockpit era, and of the horrible contrast between routine and startle.

‘Trust your instruments!’ we are told over and over again. It’s a simple and reliable reality for pilots.

Except when it isn’t.

It’s the eighth day of 2016, northern Sweden, and a Bombardier CRJ 200 is hauling 4500 kg of mail. There is a Spanish captain and a French first officer, high in the dome of the polar night.

The first sign something is seriously wrong is a continuous ‘cavalry charge’ sound of the autopilot disconnecting. The second sign is an expletive from the left pilot (the captain). On hearing the audio warning he’d looked down at his primary flight display (PFD) and was startled to see the pitch increasing at an alarming rate. At 33,000 feet, nearing midnight in the sub-Arctic darkness, and with no moon this is what he saw: 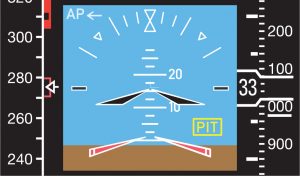 The captain did what he and every other pilot has been trained to do—he trusted his instruments. He pushed forward expecting the comforting reality he’d experienced so many times before: nose going down/horizon coming up. Except nothing happened on the PFD. He pushed forward again, much harder this time, but the nose kept coming up and the horizon kept going down—the exact opposite of what he expected.

Meanwhile, the first officer to his right had a different reality on his PFD: 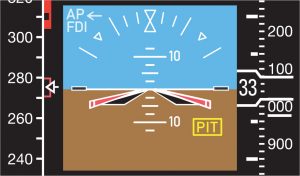 The rendered blue and brown of the first officer’s PFD showed a more benign reality—half sky, half ground. A perfectly normal cruise attitude. In fact, if it had been the first officer on the right-hand side flying, while the captain on the left was looking at an instrument approach plate (instead of the other way around) the first officer wouldn’t have even noticed the number 1 PFD pitch-up. All he would have seen was a small yellow ‘PIT’ annunciation in the bottom right corner of his own correctly indicating PFD.

In all probability he would have queried the mismatch with the captain who would probably have noticed his own PFD was erroneously pitching up. In any case, either pilot could have glanced at the perfectly functional standby attitude indicator to get orientated on the real horizon. Neither did.

Instead the captain, on seeing the malfunctioning PFD indication, was startled by what appeared to him to be a dangerously nose-high attitude. He uttered, as the report from the Swedish accident investigation authority Statens haverikommission daintily put it, a ‘strong expression’ and pushed hard on the yoke.

The co-pilot wasn’t looking at his PFD when the trouble started. He had no reason to. His was head down looking at the approach chart for Tromsø/Langnes in far northern Norway. Up to this point he’d been enjoying a rather routine flight. Take-off from Oslo/Gardermoen had been quite pleasant—poetic even. As the CRJ 200 taxied out the snow had been light, the kind of snow everybody likes, even pilots. There was no visibility-reducing kind that swirls in congested clouds of disorientating white. It seemed to bode a comfortably routine flight.

As flight 294 lined up on the runway the pilots were comfortable in the knowledge operational briefings had been dutifully refreshed, the weather carefully considered, waypoints programmed, and the night instrument departure briefed. All that needed to be done now was a quick and final check of the instruments. A glance down and it was confirmed—good to go. No yellow or red malfunction symbols: nothing but the comforting glow of caution-free PFDs. The thrust levers were pushed forward and flight 294 took off and climbed smoothly into the night sky. This seemed to be just another take-off, just another flight—just another day.

Except deep inside the heart of the number one inertial reference unit (IRU)—somewhere in the solid-state electronics of the laser ring gyro—a small glitch had developed. And it really was small. There was no catastrophic impact of geese into fast-spinning turbine blades. Nor was it the horrid sound of fatigued metal giving way. It was merely a digital malfunction of the IRU with almost no physical effect except a false pitch indication on the left side PFD. Just that one. Not the first officer’s PFD nor the standby attitude indicator—they were perfectly normal.

Just before the approach, as the crew were busy prepping for the landing, the glitch manifested. The autopilot kicked off, the audio warning sounded, and the erroneous pitch-up indication began. Without a visual horizon and with both pilots concentrating on the approach checklist, the combined influence was enough to induce startle effect and cause the captain to bunt forward.

For the first officer the startle factor was even greater. In the glow of the cockpit reading lights he had had his head down in checklists and approach plates. There’s no doubt he would have heard the chime and heard the captain swearing. Then, as he lifted his head to see what was going on, he would have been flung upwards against his straps as the aeroplane bunted. The bunt was, in fact, so vicious that the cockpit voice recorder registered thumping noises as loose objects hit the roof. Other audio warnings sounded one after the other. A single chime. Then a triple chime. Then the synthetic voice of the caution system ‘Low engine oil pressure’ and then the stabiliser trim clacker protesting the rapid and dangerous use of stabiliser trim. All of this was a result of the negative G and the deepening dive.

The first officer’s ‘strong expression’ added to the cacophony in the cockpit. It was certainly justified. No pilot enjoys abrupt and unannounced negative G. In fact, the surest way to scare a pilot is to subject them to a severe impromptu bunt. On a sky-clear day it’s bad enough. At night, in cloud, it’s kryptonite to a pilot’s composure.

Desperate for information from his instruments—and midst the chaos of flying objects, warning alerts and expletives from both his own mouth and that of the captain—the first officer noticed an alarming pitch-down developing on his PFD. 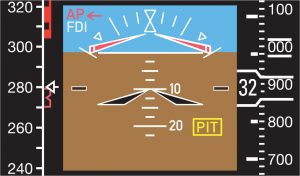 Both were now experiencing extreme duress. The most fundamental principle of controlled flight had failed—push forward: nose goes down/horizon comes up; pull back: nose comes up/horizon goes down. The captain was pushing … really pushing. But the nose kept rising and the horizon kept falling. Warning after warning harangued the crew. Unrelenting and harrowing confusion had replaced routine. Had some critical control failed? Was some structural component coming apart? Were they in the vicious grip of some sort of turbulence? Why couldn’t they get this damn machine under control?

At 20 degrees nose down (or 30 degrees nose up) the PFDs were designed to enter ‘declutter’ mode. This was a clever feature the manufacturer had built in for unusual attitudes (UA). The declutter mode removed all ‘unnecessary’ symbology—including the yellow ‘PIT’ miscompare annunciator. All that remained was basic attitudinal symbology and red chevrons pointing in the direction the pilot should point the nose to recover from the UA. The small but crucial symbol that could have saved their lives—the ‘PIT’ annunciator—was deemed non-essential and swept away. All the first officer saw was this: 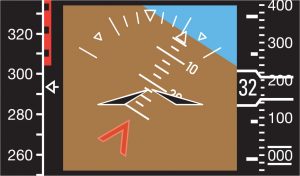 Meanwhile, the captain’s PFD had also entered declutter mode. In orientation-robbing contrast, this is what the captain saw: 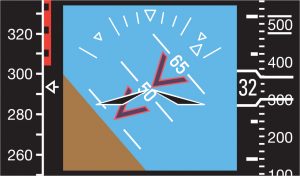 With both pilots befuddled by incongruent blues, browns and red chevrons, the reality and the import of the real horizon continued to elude them. Communication became confused.

‘Mayday, mayday, mayday Air Sweden 294!’
The co-pilot was trying to get a mayday call out, but he hadn’t activated the transmit switch. He tried again.

‘I think you were the right to correct,’

With the nose nearly 40 degrees down and the aircraft in a steepening left turn the overspeed clacker suddenly went off—the maximum operating speed of 315 knots and maximum Mach number of 0.85 had been exceeded. What had once been the comforting and coherent glow of consistent left- and right-pilot PFDs now looked like this: 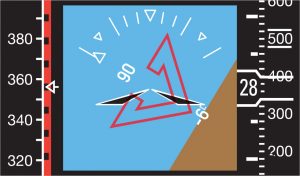 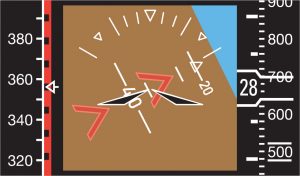 The airspeed soon increased to over 400 knots and the rate of descent to over 20,000 feet per minute—far beyond any published design criteria. Angle of bank soon increased to the point where the aircraft had become inverted.

A mere 80 seconds after the erroneous pitch up the CRJ 200 collided with the ground. It was inverted doing 500 knots. There were no survivors.

I find the warring realities on the PFDs on flight 294 horrifying. It seems almost obscene that a modern aircraft with relatively well-trained and experienced crew could fall victim to such a catastrophic crash—and yet here it is.

There are many things that could be said. The importance of awareness training around ‘startle effect’ would be one. Another would be the criticality of drilled communication during adverse events. Yet another would be the issues around the human machine interface in modern aircraft—something we evidently have not yet completely solved. The accident investigation covers off on these issues and many others and can be read here.

Would any of us have done better? We might like to think so but only those of us who have looked startle factor in the eye can be sure. And maybe not even then because every startle is unique; past results are no guarantee of future performance, as the fine print on your super statement says. Add bunt next time and see how you go.

There are many things that could be said. The importance of awareness training around ‘startle effect’ would be one. Another would be the criticality of drilled communication during adverse events.

Applying a proverb to such a rare, frightening and rapidly lethal event seems almost as short sighted as applying undiluted hindsight and saying, ‘that could never happen to me’. And yet there’s one proverb that fits. In Russian it’s ‘doveryai, no proveryai’, which translates into English as ‘trust, but verify’. Appropriately, this saying has a pedigree in terror. It emerged as the catchphrase of the Intermediate Range Nuclear Forces Treaty between the US and the Soviet Union in 1987.

So, trust your instruments but verify, against the other side of the flight deck and the standby instrument. Remember your partial panel checks and how gyroscopic and barometric instruments operate from different physical principles. If your attitude reading is extreme but your airspeed and altitude are steady then it’s the gyros that are gone, and vice versa.

Aviation rightly lauds its pioneers, such as Jimmy Doolittle, who first demonstrated instrument flight nearly 90 years ago. One gyro, one lap of the field, one giant conceptual leap. Cruising on autopilot it’s easy to forget what a huge leap it was. A century of refinement and improvement has made the lives of modern pilots easier in some ways, and certainly safer. Except when something goes wrong, in a new and unanticipated way, creating a fiendish problem with almost no time to solve it.