In mid-2018 I attended a skydiving training event at a small skydiving centre on the Central Coast of NSW. I was training for the Australian world record formation event to be held in 2019.

The day of my close call was a cold misty morning in an idyllic rural setting. We were a group of 10 people jumping out of a de Havilland Beaver. I had never jumped in this particular area before so I listened intently to the morning briefing and orientated myself to the major landmarks that would guide me back to the landing area.

By the third jump of the morning, I was confident of my ability to navigate back to the airfield under canopy and relaxed into the familiar pattern of memorising and visualising the freefall formation.

As we ascended on that third take-off, I became aware that the pilot was having some instrumentation problems. Some conversations occurred between the senior jumper and pilot and a call was made to ‘hop and pop’—make a low-level exit with an immediate parachute opening.

I was one of the last jumpers out of the aircraft and looked down at the long line of parachutes stretching back towards the airfield. All jumpers were safe, under perfect canopies.

I watched the aircraft land safely in the distance and then became aware I was well downwind. The wind had picked up and, combined with my low chute opening, meant I was definitely not going to make it back to the landing area.

I was above a horse farm and, as I circled to approach a paddock, I noticed a wire fence running across where I was about to land. With only seconds to make a decision, I instinctively turned to do a downwind landing.

The wind speed had increased significantly since take-off and my parachute accelerated enormously. A nearby shed may have also been throwing a vortex my way. At the
speed I was travelling, I was definitely going to be injured.

I gently tried to turn the canopy back towards the wind to get whatever headwind I could to reduce my ground speed, turning just enough to capture some headwind while minimising my descent rate. I came in hard and fast with a slight left turn still in progress.

My canopy was dragging me backwards across the hard-baked field and, as I tried to get up, I realised my left arm was dislocated and facing backwards. My left foot was starting to throb in my boot and I was getting tunnel vision.

In minutes I was surrounded by fellow jumpers, assisting me until the Westpac helicopter arrived and spinal braced me for a flight out. I underwent two major operations, spent three months in bed and 12 months on crutches.

My left foot was so badly shattered that I have a permanent limp and very little articulation in my ankle. My arm has recovered okay.

What did I learn from this accident? I was complacent. After hundreds of jumps with a perfect landing record, I wasn’t alert enough in this unplanned situation. I was perfectly prepared for a normal flight and landing circuit—I had neither that day.

I have advised many new jumpers that landing is the most dangerous part of skydiving. I knew this fact but had never had an off-zone landing to consolidate that in practice. I should have been on the highest level of vigilance from the moment I left the aircraft. My decision to turn downwind was more of a reflex action—I had run out of time to think more consciously.

By practising emergency situations (by practice or visualisation), we have more chance of making a correct instinctive decision. Intense stressful situations create distortions in thinking and planning. Learn every aspect of what should happen and what can happen.

I had deferred doing a canopy flying course because it wasn’t as exciting as the freefall I enjoyed so much. I should have taken that course. The opportunity to learn from the expertise of others, learn about the exceptions that can happen and practice with others is invaluable. My lesson is more training and less complacency. 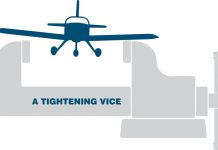