Tea and coffee have joined the list of aviation hazards—after official warnings and even an officially approved countermeasure.

Airbus has developed a cover for switches on the central pedestal in the A350 flight deck to protect engine controls from liquid damage. The measure comes after two engine shutdowns in the past year on A350s, and the European Union Aviation Safety Agency (EASA) instructing all A350 operators to install the new covers within 28 days. The cover protects engine master switches, thumbwheels and rotary knobs and needs to be removed during take-off, approach and landing.

FlightGlobal reported the shutdowns were on an A350 operated by an Asian carrier in November 2019, in which tea was spilled, and a Delta Airlines aircraft in January 2020. Both aircraft had to divert and the Delta aircraft had to shut down its right engine. Flight data recorder analysis revealed the engine’s control unit had closed a high-pressure shut-off valve after inconsistent output from the cockpit control panel.

Airbus and EASA confirmed that both incidents had involved spilled liquid.

‘This condition, if not corrected, could lead to a dual engine IFSD, possibly resulting in a forced landing with consequent damage to the aeroplane and injury to occupants,’ an EASA emergency airworthiness directive said. Airbus responded by first declaring the flight deck a liquid-free zone in the aircraft flight manual and then by developing the pedestal cover.

Spilled coffee also brought about the diversion of a Thomas Cook Airlines Airbus A330 in February 2019 after radio communication cut out.

No Australian airlines fly the A350 but the type is a frequent sight at Australian airports—flying for international carriers—or was, before COVID-19. 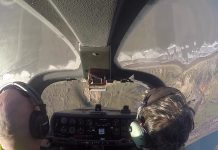