How do you find the vital pre-flight information you need when it’s buried deep in a stream of NOTAMs? This frustration, felt by pilots around the world, is finally being addressed—but don’t expect change anytime soon

‘They’re just a bunch of garbage that nobody pays any attention to.’

Robert Sumwalt’s frustration was evident at a hearing into a taxiway overflight which occurred in July 2017 at San Francisco International Airport. Sumwalt, the chairman of the US National Transportation Safety Board (NTSB), was referring to the role NOTAMs (notice to airmen) played in the incident—involving four airliners, carrying a combined total of more than 1000 passengers and crew—which narrowly avoided becoming the worst aviation accident in history.

The NTSB found an Air Canada A320 inbound from Toronto missed vital information about a closed runway at San Francisco and, mistakenly approaching to land on the taxiway, overflew a queued Philippines Airways A340, clearing its tail by only 14 feet. Two other United Airlines passenger aircraft were queued behind the A340 on the taxiway.

According to the NTSB report (AIR-1801), ‘the probable cause of this incident was the flight crew’s misidentification of taxiway C as the intended landing runway, which resulted from the crew members’ lack of awareness of the parallel runway closure due to their ineffective review of NOTAM information before the flight and during the approach briefing’. The NTSB also noted ‘Air Canada’s ineffective presentation of approach procedure and NOTAM information’. The relevant information was buried on the eighth page of a 27-page iPad flight release package, containing not only NOTAMs, but also weather and route information.

In 2017 the US Federal Aviation Administration identified NOTAMs as two of its ‘Top 5’ hazards in the National Airspace System, because of:

The ongoing criticism of NOTAMs is due to several issues, particularly their formatting, relevance and content.

Martin Smith, a B-737 captain and chair of the Australian Airline Pilots’ Association (AusALPA) air traffic services portfolio, finds the formatting and sheer volume of NOTAMs frustrating. He says the capital letters, the 10-digit date/time group as one number and no punctuation make the alerts difficult to decipher.

‘We had one which included “737NA”,’ he says. ‘Logically, you would think it meant “not applicable”, but it was “737 not authorised”.’ Another one which appeared in a US NOTAM was ‘HSL’, which puzzled Smith and his crew—the translation? ‘Hold short light’.

The sheer volume of NOTAMs is also a major issue. Their number has increased dramatically—500,000 were issued worldwide in 2006. However, by 2013 that figure had doubled and, in 2018, four million NOTAMs were issued. Smith says a typical flight will involve hundreds of NOTAMs, of which 99.9 per cent are irrelevant. He quotes one of his favourite examples: ‘The Buller church spire light is U/S—it’s been that way for 20 years’.

There has also been an increasing tendency for NOTAM issuers to use them as ‘legal insurance’, providing organisations with the defence, ‘you had the information: we issued a NOTAM’. Never mind that, as in the Air Canada case, the information may be buried deep in the many pages of an iPad flight release package.

While criticism of NOTAMs focuses on their readability and relevance, they are still acknowledged as a vital source of safety information—the only place where such information can be consistently accessed. Speaking to Business and Commercial Aviation magazine in November 2019, Sumwalt from the NTSB said, ‘I do want to emphasise that the idea of NOTAMs is not garbage, but it is the amount of material that is irrelevant that obscures safety of flight’.

There is now a strong global focus on NOTAM reform, with many agencies and jurisdictions working to remedy their many identified deficiencies. Eurocontrol has adopted a digital NOTAM system and the US is ramping up digital NOTAMs through the Federal NOTAM System Distribution Service, which transmits digital NOTAM messages in a standardised code, and via NOTAM Search, a web-based user interface for querying NOTAMs, available to the American aviation industry.

Roy Tuomela, CASA’s Manager of Air Traffic Management System Standards, is also chair of the ICAO aeronautical information management (AIM) working group. He says there is a strong will for change. ‘The working group was allocated five new job cards in late 2019, of which the biggest and most important is the NOTAM job card,’ he says. ‘This has the ultimate goal of replacing the NOTAM system with a web-based information and distribution service.’

While transitioning to a new system based on digital data set services will be a long and complex process, ICAO acknowledges the urgent need for improvement. Therefore, a focus group is looking at potential short-term solutions. It began in 2019 by surveying users. The result was 1277 aviation industry personnel—chiefly from airlines, but also GA operators, air navigation service providers, airports, regulators and data houses—responded from 75 countries.

The respondents felt that NOTAMs were important to their operations as a means of providing flight crew with essential information that has a limited, temporary timeframe and is received at short notice. However, 79 per cent reinforced the criticisms about NOTAM format, number, relevance and ease of access to information, agreeing that ‘the current NOTAM system was not contributing to safety or efficiency’. 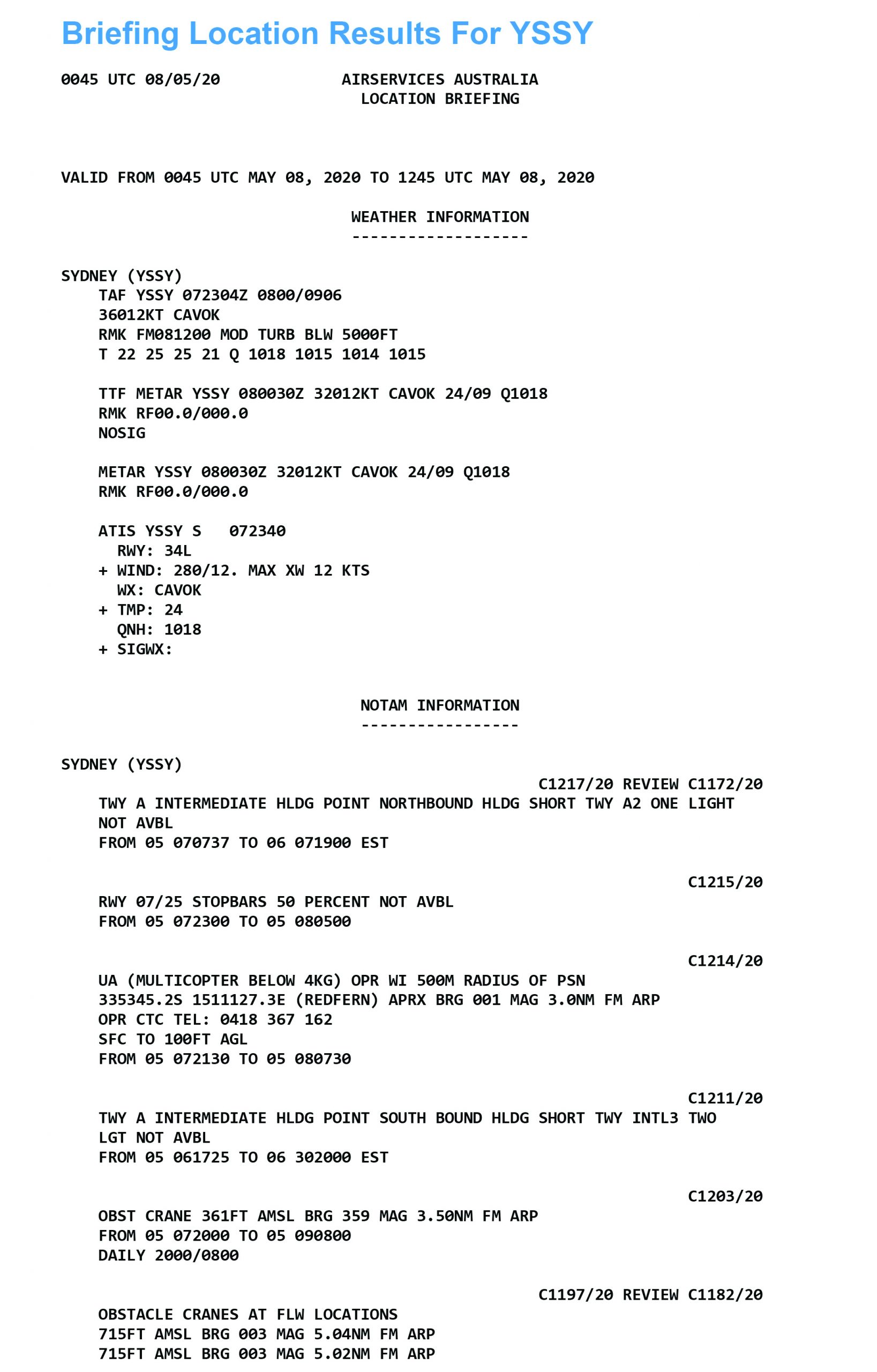 Following the questionnaire, an options paper detailing some potential short-term solutions is due to be presented at the July 2020 meeting of the AIM working group (COVID-19 permitting). The working group is looking at options such as placing information in guidance material or developing dedicated e-learning modules, for example, covering topics such as ‘what to include in a NOTAM’ or ‘use of NOTAM selection criteria
to assist in standardisation’.

Some industry groups, such as AusALPA and the French civil aviation agency, acknowledge the ICAO long-term solution is likely to be at least a decade away, and are therefore looking at short- and medium-term solutions. Smith and AusALPA recommend a staged approach. ‘We should fix the easy things, such as changing the character set, the date-time groups—people who write the software apps can change these,’ Smith says.

He suggests an education program to encourage standardisation in the abbreviation set, for example. ‘There’s also nothing stopping us putting URLs in NOTAMs.’ The next stage would be to enable electronic filtering and graphical representation of information. ‘Eventually, we scrap the old system and move to a digitally based, database application,’ Smith says.

There is general agreement that the only viable, long-term solution is for an online NOTAM information service

The approach of the French civil aviation agency to improving NOTAMs has focused on an operational classification of NOTAMs, using an algorithm which classifies the alerts in categories and sorts them according to priorities. In this way, pilots can have the relevant NOTAMs at hand, but because the alerts are not filtered, do not risk losing any potentially important information.

The algorithm sorts the NOTAMs in categories by the phase of flight: departure aerodrome, destination aerodrome, other aerodromes, and flight information region NOTAMs en route, with an operational order within each section to display the most important NOTAM first and avoid having a crucial NOTAM in the middle of other less significant ones.

These short-term solutions may alleviate some of the NOTAM pain, but there is general agreement the only viable, long-term solution is for an online NOTAM information service, which would permit, for example, the type of graphical representation many pilots are requesting and eliminate the plethora of irrelevant NOTAMs, not by removing them, but by not displaying them.

Arguably, this is not an aviation problem but a data problem—how to ensure the data is reliable, and how to structure it and make it available in a form that allows the industry to use it effectively. In other words, to create an effective application programming interface based on reliable, standardised data.

There is a strong will within ICAO for change—and the AIM working group has what Tuomela describes as ‘smart heads and a lot of experience’. Combined with the other global initiatives, the energy to reform NOTAMs has—hopefully—reached critical mass.

Watch the video of the NTSB hearing and the Air Canada taxiway overflight.

To begin at the beginning 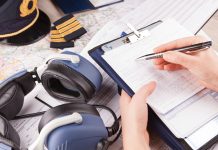 Checklists: why and how