A piece of Australian aviation history leaves our shores today, on its way to a Californian aircraft boneyard. It is the last flight of a Qantas Boeing 747.

At 2 pm, Qantas flight 7474 will push back for Los Angeles and fly over Albion Park Airport, south of Sydney, before crossing the Pacific for the last time. Two days later it is scheduled to make the short flight from Los Angeles to an aircraft storage park in the Mojave Desert. The aircraft type that made international travel an affordable reality for millions of Australians will have gone.

Other more fuel-efficient twin-engine designs such as the Boeing 777, 787 and Airbus A350, will continue this role when aviation recovers, but no current aircraft will ever have the world-changing impact of the original ‘Jumbo Jet’.

Its size offered a new combination of range and low cost per seat and, for a few years early in its career, it also offered first-class passengers a luxury not seen since the mythical golden age of flying—space. Qantas’ early 747s entertained first-class guests in the upstairs ‘Captain Cook Lounge,’ a lurid, nautical-themed cocktail bar in the upstairs hump behind the flight deck.

Over 48 years and 11 months, Qantas operated 65 747s, accepting its first delivery in 1971. For several years beginning in 1979, Qantas was a 747-only international airline. And in 1989, a 747-400 made headlines for Qantas with a record-breaking non-stop London to Sydney delivery flight. In the 21st century Qantas was the only operator of the long-range 747-ER.

The  COVID-19  crisis has accelerated the exit of the relatively old-fashioned and inefficient (if reliable and much loved) 747 from world aviation. Last Friday, on the day British Airways announced it would immediately retire its entire Boeing 747 fleet, the last Qantas 747-400 completed its final flight with passengers in Canberra.

VH-OEJ was Qantas’ last remaining 747 and once flew in Indigenous art livery as the airlines flagship, Wunula Dreaming.

CASA employee Pamela Tomlinson took a day off to see the 747 for the last time.

‘Not many aircraft have captured the hearts of aviators and travellers more than the Boeing 747,’ she says. ‘She was the queen of the skies, whisking passengers to far off and exotic places, and inspiring many a young child to pursue a career in aviation, with her size and beauty.’

The secrets behind the flying radar ‘roo 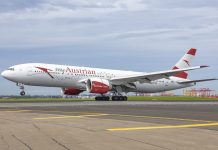