Situational awareness, distraction and landing fixation are the themes of three chilling anecdotes. We are all human, so ask yourself: ’would I have done better—or been bitten?’

When to speak up

A Dash 8 almost collided with a Foxbat because the pilot of the smaller aircraft had the radio volume turned down.

This could easily have been Australia’s worst aviation disaster since the 1960s. Adding to the seriousness of the incident, the near-miss took place near the built-up area of a regional city.

CASA Aviation Safety Advisor Tim Penney says this dramatic case illustrates why communication and situational awareness are vital for safe flying. ‘This is a classic case where breakdowns in communication can have serious safety implications,’ he says.

But the overlooked volume control wasn’t the only factor is this incident. On the day, in May 2007, four aircraft were involved: two were approaching Port Macquarie Aerodrome and two were taking off. Port Macquarie is a non-towered common traffic advisory frequency (CTAF) airport, where safety relies on the see-and-avoid principle.

The Dash 8 was overflying the aerodrome to join circuit for runway 03 as the Foxbat was lining up on runway 21 and the Baron was on final approach to 03. The crew of the Dash 8 saw the Foxbat rolling and alerted the Baron pilot who initiated a go-around from short final.

The crew of the Dash 8 decided to modify their approach to join the circuit for runway 21—but were then forced to go around from short final as the pilot of the Foxbat turned onto final in front of the larger aircraft.

‘The go-around by the Dash 8 was the first time the pilot of the Foxbat became aware of other aircraft in the circuit,’ the Australian Transport Safety Bureau (ATSB) says in its report of the incident.

When the Foxbat was safely back on the ground, a club instructor found the radio volume was at a very low setting.

‘No one is immune to this type of situation,’ Penney says. ‘I’m certain many of us have been flying with the volume turned down unintentionally or the radio on the wrong frequency. But what this does show us is that if we have a breakdown in communication or our ability to communicate over the radio is hindered, suddenly we’re flying with our situational awareness very compromised and the ramifications for safety can potentially be massive.

‘To slightly modify an adage for aviation, “Sticks and stones may break my bones, but lack of words—or the wrong words—have the potential to kill me”.’

The data found some pilots on a typical VFR flight had their head inside the cockpit more than 50 per cent of the time.

After more than 30 years in the aviation industry as both a pilot and safety advisor, Penney is still as passionate as ever about air safety and sharing that with the Australian aviation industry.

‘It doesn’t matter what you fly—human factors concepts are applicable across the board,’ he says. ‘The ones I want to emphasise are communication, situational awareness and threat and error management. That’s because non-towered aerodromes are a central component of the Australian airspace system, where these three factors play an essential role in keeping us safe.’

‘Research by the ATSB indicates that problems with communication and situational awareness, in particular, lead or have the potential to lead to accidents. Not only insufficient communication, but also communication that is inaccurate, or even too much communication in the circuit area where the CTAF frequently gets very busy.’

All pilots need to be very careful about maintaining situational awareness, especially when there are distractions, such as iPads and passengers, Penney says.

He cites research from the United States where VFR pilots were hooked up to biometric sensors to track where their eyes were looking. ‘The data found some pilots on a typical VFR flight had their head inside the cockpit more than 50 per cent of the time.’

Penney says while the Dash 8 and the Baron on descent were probably ‘lit up like a Christmas tree’, there are various reasons why the larger aircraft were not spotted by the Foxbat pilot.

An effective scanning technique is important to avoid ‘empty field myopia’ which occurs when there is little or no detail to see. ‘If that’s the case, the human eye will often have a resting focal length of between three to five feet outside the cockpit window,’ Penney says.

‘One way to beat that is to keep our eyes moving and our head moving too. If we use not only our eyesight but also our radio appropriately, then according to ATSB research, we have something like an eight-fold better chance of spotting other aircraft than if we were just using our eyesight alone.’

Situational awareness can easily be lost when an instructor and a student begin a discussion while they’re still taxiing, especially at a busy airport with a complex taxiway layout.

At Moorabbin Airport, a Cessna 172 with a student and instructor had touched down on runway 13L and was issued with a clearance to taxi back to base via taxiway C, but hold short of runway 13R. However, the aircraft did not stop at the holding point and continued across the runway. Another Cessna was landing on 13R. Its pilot spotted the intruder and initiated a go-around.

The ATSB report on the incident in December 2011 says: ‘The pilot in command of [the first Cessna] reported that he had been distracted by discussions with his student at the time … The quick action by the pilot of [the landing Cessna] demonstrates the effectiveness of maintaining a good lookout during landing. The incident also highlights the need to avoid distractions when operating on or near an aerodrome.’

The passenger in the landing aircraft was recording the landing—an image captured from the video shows the two aircraft in close proximity.

‘That event was a very, very close-run thing,’ Penny says. ‘We need our situational awareness to be at a consistently high level, especially when we’re flying around busy aerodrome environments, be they a controlled aerodrome like Moorabbin, Bankstown or Jandakot or any of the CTAFs around the country. Remember, at a CTAF, we don’t have air traffic controllers, there’s not that second pair of eyes to assist us, there’s no one to tell us to line up or give us a clearance to take-off or land. In the non-towered environment, we as pilots in command make those decisions.

What are some of the red flags to indicate a pilot might be losing situational awareness?

‘The classic case is when the iPad says I’m at a particular location; however, when I look out of the cockpit, it doesn’t match what I’m seeing on my map—instant loss of situational awareness,’ Penney says.

‘Second is fixation—fixating or concentrating on one thing in the cockpit to the exclusion of everything else. That’s a dangerous place to be.

‘Another factor is failure to fly the aircraft, such as when you have two pilots on the flight deck but there isn’t a clear division of duties. Fourth is a failure to look outside. You might think that’s just a given, but think back to the scenario at Port Macquarie.’

With the knowledge about these red flags, how can pilots improve their situational awareness during a flight?

Penney says it’s important to trust your instincts. ‘It’s amazing how accurate that gut instinct is, especially as we develop and grow our experience,’ he says. ‘It’s that feeling deep inside our gut or nagging away in the back of our mind that says, “something’s not quite right”. And remember the sterile cockpit rule used by airlines. We don’t have to establish that for private flying, but you might want to ask your passengers to stay quiet in the circuit area, unless they see something the pilot should be away of.

‘The third tip is to fly within your personal limits, that could be for such things as visibility or crosswind. Personal limits play a large factor, especially for pilots who might not fly regularly and whose experience or recency might not be as fully developed as those who fly every week.

‘Finally, prioritise what we do in the cockpit—aviate, navigate, communicate. Consider accomplishing as many tasks as appropriate during a quieter phase of flight—for example, prior to descent. This can help us free up the cognitive brain space to assist with our situational awareness during busier phases of flight, such as joining a circuit at a non-controlled airfield.’

When to pull up

Pilots need to engage in threat and error management for every flight.

‘We often liken threat and error management to enhanced airmanship or even defensive driving,’ Penney says. ‘Think about the external threats we’re likely to face and how we are going to manage them whenever we go flying. The threats might be weather or airspace related, it might be air traffic control or distraction by passengers. Do I have a plan B? Or even a plan C? Am I prepared to actually implement these alternative plans if I need to?’

Penny says analysis of accidents around the world shows the majority involving aircraft that run off the end of a runway can be traced back to an unstable approach.

‘To help this, first we need to nominate the touchdown point early on final approach,’ he says. ‘Second, fly a constant profile and know the correct approach speed for our aircraft.

‘Finally, if we are not stabilised in our approach by a nominated height, have the discipline to go around. Don’t try to push a bad approach because often it will end in tears as we spear off the side of the runway or land too long and go off the end.

‘The airlines are very hot on flying stable approaches and going around if need be and we, as recreational or private pilots, should be doing this as well. There’s no shame in going around.’

As an example of threat and error management going wrong, Penney cites the example of a home-built aircraft coming into land at Caloundra. The pilot saw parachutists and was concerned they might drift across the runway, so he manoeuvred to the right on final approach to allow room.

‘The pilot ended up too high on profile on short final but, instead of going around, tried to regain the correct profile by entering a slideslip very close to the ground,’ Penney says.

‘However, when coming out of that slideslip manoeuvre, the aircraft stalled and crashed. Four people were seriously injured, particularly the pilot. The situation was not helped by the aircraft being loaded beyond its centre of gravity.

‘This accident highlights how errors can still be made in the management of an external threat.’ 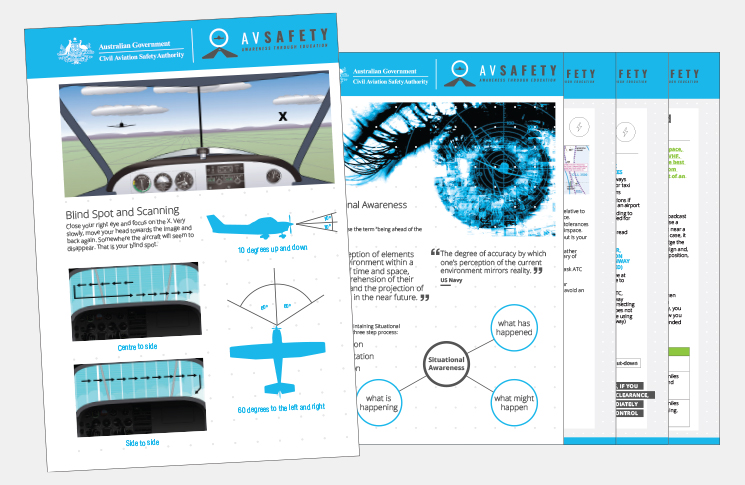