Home Audio Down and dirty 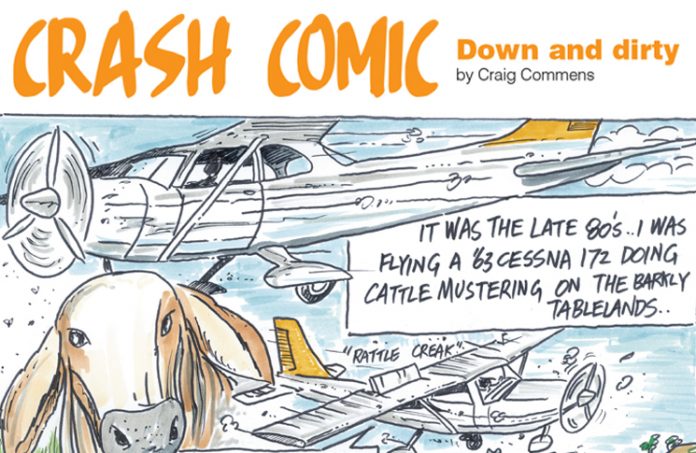 It was the mid-80s and I was working as a mustering pilot on a group of Barkly Tableland cattle stations. I had about 2500 hours at that point, all station flying with lots of mustering, so half my life was spent below 200 feet.

One of the aircraft was a 1963 Cessna 172. It had about 6000 hours on the clock and had obviously had a fairly hard life, but it had proved to be fairly reliable, if a bit underpowered, and we got along OK.

We were mustering cattle from a huge wooded area onto a plain and the ground crew were moving them along in the direction of the next yard. It was a good day, the cattle were working well, the thermals weren’t shaking the hell out of me and everything was going fine as I worked a mob out of the timbered area.

I did a quick check of the engine gauges, something I had trained myself to do very regularly, because if I have an engine problem, I want to know about it sooner rather than later. Fuel, fuel, temperature, pressure—it takes 1–2 seconds every 5–10 minutes. On this occasion it was fuel, fuel, temp, ‘Holy cow, no oil pressure!’ Not just low, but none!

What followed were the longest five minutes of my life. I lost all interest in the cattle, pointed the aircraft towards the open country and cut the throttle to 1900 RPM. I figured that if I didn’t flog it, it might last a bit longer, and then I started looking for the thinnest patch of trees to crash into.

I was under no illusions here, I knew that the engine was going to seize, I was going down in the trees and it was going to be ugly. I was about 50 feet above the trees but decided to get to the open country as quick as possible, without trying to climb, as I figured that would need more power and kill the engine more quickly.

The pressure gauge was still below zero and my crash site was constantly changing. I knew I would only have 20–30 seconds from the engine seizing to impact. This eventuality had never been mentioned in any of my training so I was making it up as I went along. I really didn’t want to be on the news tonight.

After what seemed like an eternity, I got to the point where, if the engine seized, I’d be able to clear the trees and land on the open country. Even though it was very rough and I knew the nose wheel would be torn out on touchdown and I’d probably nose over, I was happy with that because it was survivable. I did wonder how much unrestrained gear I had behind the back seat, though.

After another eternity, which was all of about two minutes, I got to within gliding distance of the track behind the cattle, so I shut the engine down and had an uneventful landing. I figured I might even be able to salvage the engine. After I rolled to a stop, I just sat there for a minute sucking in a few deep breaths. It was about then that I realised why the Pope kisses the ground when he gets out of a plane.

While I was kissing the ground, I noticed that the whole underside of the fuselage was covered in oil. I pulled out the dipstick, revealing half a litre of oil in the sump. I felt sick in the guts. How close had I come to ending up in the trees? One of the ground crew turned up with the usual question, ‘What do you need?’ – but he didn’t have a cold beer on him.

I removed the top cowl and quickly found the problem. The oil line that ran from the engine to the oil pressure gauge had fractured and was pumping all the oil out. Even though this oil line is in the top of the engine bay, there wasn’t one speck of oil on the windscreen. The line was repaired, the oil was replaced and we lived to fight another day.

Lessons learnt: The oil line failure was fatigue resulting from the hard life the aircraft had led. I saved my own skin because of the way I had trained myself to check the gauges regularly. This had been drummed into me as a student pilot, but I had fortunately added to it. Losing an engine at 10,000 feet or at 50 feet are worlds apart. The way I saw it, I was my own keeper. How many revs would have been left in the engine if I’d been another couple of minutes checking the gauges, is something I don’t want to think about.

This close call featured as the ‘crash comic’ in the Autumn 2020 edition of Flight Safety Australia.