This pilot reflects on how a flight drifted close to danger, despite the best of intentions

This close call wasn’t too long ago, but I’ve spent a lot of time thinking about what happened and how I can avoid a similar situation happening again.

On the day, I woke up at about 5 am and checked the weather. The forecast was worse than the night before. ‘Bugger’, I thought. It was marginal, yet doable, so I got ready anyway and headed to the airport.

I was excited—I was going from Moorabbin to Adelaide International with one of my classmates as part of our CPL hour building time. This was something we had talked about doing for a while and we thought it was pretty cool taking a little aircraft into such a large airport. We had been planning it for the last few days and couldn’t wait to fly.

When we got to the airport, it was drizzling, but with words in our heads saying, ‘It should clear up’. Our plan was to go from Moorabbin to Warrnambool to refuel, then continue on to Adelaide via Mount Gambier to check the quantity of fuel in our tanks. We checked the weather and decided that it should be okay to go.

The weather from Moorabbin to Warrnambool was isolated showers with a cloud base of about 2000 feet. We preflighted our Piper Archer and by 8 am we were ready to go, except the weather had changed. The Warrnambool TAF had changed to have an INTER with broken cloud down to 1200 feet but only until 10 am, so we decided to delay our take-off.

At about 10 am, we started the engine and proceeded to the run-up bay. I noticed a few low clouds coming in from the west and before I could say anything, the Moorabbin ATIS had changed to say, few clouds at 900 feet, with a broken layer at 1400 feet. With our eagerness to get to our destination, we both decided to depart Moorabbin under Special VFR rules and continue with the flight.

We took off and, on upwind, I realised the door had not been shut properly. I tried to deal with it while Tom flew the aircraft, but I ended up needing his help to close it. We managed to get it closed after we had told Moorabbin Tower we were returning due to a door issue, so we advised that we were no longer returning, but continuing our flight.

If it was a sign from above, we ignored it. I already felt uneasy about the flight as we were barely five minutes in. Nevertheless, we continued and cruised at 2000 feet due to cloud above Port Phillip Bay. However, it opened up to a base of about 2500 feet around Avalon and extending to the west. ‘We’ve passed the worst of it I reckon, should be fine from here,’ I said, and Tom agreed.

About 30 nautical miles later, we encountered a couple of showers that were impenetrable, so we were diverted about one to two nautical miles off track to pass around them. Looking at the showers, I could see that cloud was about 200 feet off the ground within the shower and it made me uncomfortable.

I had CASA’s 178 seconds to live video replaying in my head and it was a strong reminder of what was possible. However, at this stage the clouds were isolated and we were able to divert around them while maintaining VMC.

Soon after, the showers were becoming frequent. We decided to go through a lighter looking shower in between two others. However, we soon realised that the visibility was not what it seemed.

It was not IMC, but for two low-hour pilots, it was enough to warrant a turn in the opposite direction. I looked at my map and we were now 15 nautical miles off track. The weather didn’t look like getting better anytime soon and a small airport, Cobden, was six nautical miles behind us, so I made the suggestion to land there and reassess. Tom quickly agreed.

During this time, we ran into a few local pilots who were also planning to fly to Warrnambool in the next hour, which made me feel a little bit better about our decision. However, 20 minutes later they had decided to drive to Warrnambool. In hindsight, a good decision by them.

I checked the fuel and, to my surprise, found we had already burnt two hours of our five hours of fuel. I did some calculations and decided we could hold at Warrnambool for 40 minutes before we needed to head back to Moorabbin and land with our reserves. It was close but I was not uncomfortable.

It was now 12.00 pm and the clouds looked a little better. We decided to take-off and assess again once we were airborne. There were showers on our track to Warrnambool so we decided to go south towards the coast and see if we could make it through around there.

We reached Warrnambool township, about three nautical miles from the airport, yet when I looked towards where it should be, I was looking at a wall of water, with no way out but behind us. I was thinking to myself what to do next.

After diverting around more weather on the way to Warrnambool, we could now only hold for 20 minutes and that was to land with just our reserves. About a minute had passed where neither Tom nor I had said anything and the cloud was fast approaching. ‘What are you doing?’ I asked. He replied, ‘I don’t know.’ I decided to put my foot down and said, “Turn this thing around and let’s get the hell out of here—I don’t like it.’

At that point I realised what we had gotten ourselves into—30 seconds longer and we may well have been put on the ‘inadvertent VFR into IMC’ list.

The journey home was largely uneventful. We decided to make another stop to double-check our fuel and then landed at Moorabbin just after 3 pm.

To this day I have never been as happy as I was then to have our wheels back on the ground.

On the flight back, I was feeling disappointed, disappointed we didn’t make it to Adelaide, but I was more disappointed that we had pushed on, thinking ‘It’ll be alright’. We very nearly had inadvertently flown into IMC conditions, a place I did not want to be. I had realised we had been victim to something I had learnt in my studies—risky shift.

This flight was an experience that I won’t be forgetting anytime soon.

Lessons learnt: First, the weather forecast isn’t always right. Saying ‘She’ll be right’ won’t get you through a risky flight. Always ensure you and your co-pilot are feeling comfortable and in control. And, most importantly, listen to your gut. To say that flight was a close call is an understatement. I don’t know what would have happened if I didn’t finally snap out of it and realise we weren’t going to get any further that day. It’s helped me understand as a pilot how critical timing and decision-making is. All I can say for sure is that if we had left that call any longer, that flight could have ended a lot worse. 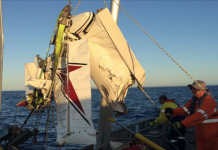