Recently I embarked on a one-hour coastal flight departing from Southport Flying Club. I had received my RAAus cross-country endorsement after many hours of training and exams. I have around 100 hours of flying time and try to ensure every flight is by the book and error-free.

It was a clear sunny day with minimal cloud cover. I departed Southport on 01 and turned downwind for departure to the south, remaining below 1500 feet to avoid Gold Coast controlled airspace which commences almost immediately south of the airfield.

My training taught me to make clear taxi and departure calls and regular position calls in the busy Gold Coast airspace, which must include call sign, position, altitude and heading. This makes it abundantly clear to all traffic where you are and what your intentions are. My track took me overhead Carrara Stadium where I reported my position and then turned east towards Broadbeach at 1400 feet to ensure I did not breach controlled airspace at 1500 feet.

The coastal strip past Surfers Paradise and Broadbeach is very popular with GA aviators and flight training schools as the views are spectacular. To ensure high-density coastal traffic separation in class G airspace, the VTC recommends flying southbound at 1000 feet AMSL and northbound at 1500 or 500. The WAC and VNC have no such notations which has taught me to use all 3 charts rather than just one.

An experienced former Emirates training captain at my field had urged me to avoid flying at 500 feet northbound, regardless of the memorable views. He said that altitude allows very little time to plan for an engine failure, with the crowded beach offering minimal options for a forced landing. The view is still great at 1500 but significantly increases potential landing areas and gives more time to plan.

As always, I opted for 1500 feet northbound once clear of controlled airspace and made my radio call to alert traffic of my intentions. Just after my call, I heard a garbled, stumbling call from a Cessna pilot.

All I could pick up was ‘Cessna southbound 1500 Q1’. [The Q1 tower is a VFR reporting point.] As this was very close to my altitude and location, I requested a repeat radio call from the Cessna and received no reply. I glanced down at my traffic app which showed no transponder-equipped aircraft near me. In the past I have noticed some aircraft do not have transponders or do not have them turned on. I suspect they are students (like me recently) on solo nav flights into controlled airspace to Gold Coast airport via Southport. I also suspect that, due to a high workload and some degree of nerves preparing for arrival into Gold Coast area, they do not monitor or broadcast on the local CTAF when transiting as they are tuned into and preparing to arrive at Gold Coast Airport.

I needed to make a fast decision, with an unresponsive aircraft near me at the wrong southbound altitude (it should have been at 1000 feet), close to my location and altitude. I could not see any aircraft or on my traffic avoidance instruments. My first thought was to climb to 2000 feet as that was the closest alternative altitude. If I descended to 500 feet northbound, as recommended on the VTC, the other aircraft may have realised their mistake and descended at the same time. I looked out front as long as I could, but an aircraft approaching head-on is very difficult to see. As I began climbing from 1500 to 2000 feet, I had a second thought – I should not bust controlled airspace in case an inbound commercial aircraft was on descent for Gold Coast airport. I also feared the embarrassment of incorrectly following the rules so recently drummed into me.

It was then I made a very quick decision to turn right as trained and descend to 500 feet, thinking this would significantly minimise any conflict. As soon as I broadcast my intentions, the Cessna pilot again made a stuttering radio call – in which I could not catch his call sign or exact location – advising he was still at 1500 (despite this being the incorrect altitude), tracking south coastal.

I looked up to the left and he sailed past me, luckily with quite a margin to spare.

I sensed he was overloaded and unsure of the area and landmarks, which is understandable when you are in an area for the first time. I looked up to the left and he sailed past me, luckily with quite a margin to spare. I immediately turned left to position closer to the safety of the shoreline, as by now I had descended to 500 feet. While looking out carefully, I then climbed back to 1500 feet, northbound coastal, with the appropriate radio call.

Was this a close call? In my mind it was very close because I was dealing with an overloaded pilot who was making unclear or no radio calls, at an inappropriate altitude. In addition, his actions prompted me to descend to what I believe is an unsafe low altitude as we can never predict an engine failure, no matter how well we maintain our aircraft.

Clearly, he had not consulted the VTC and was somewhat nervous, given the poor clarity of his radio calls. At least he was broadcasting on the local CTAF or I would not have known to prepare for a potential conflict. 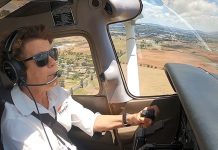 Remember to speak up for safety