Home Feature A bump in the night

At 9.29 pm on Friday 29 January 1971, the flight crew of a Trans Australia Airlines Boeing 727 aircraft called the surface movement controller in Sydney Tower, and requested a clearance to taxi. The clearance was received and the aircraft taxied along taxiways ‘L’ and ‘G’ towards the holding point for runway 16-at that time the only ‘north-south’ runway at Sydney Airport.

Doug Spiers, then 28, was first officer. A career flying DC-3s and Viscounts had led him to the right-hand seat of his first jet type. The other members of the flight crew were Captain Warren ‘Jimmy’ James, a veteran, who had begun his aviation career as a flying instructor on Tiger Moths in World War II; and Flight Engineer Jim Ryan, also 28 years old.

‘We’d overnighted in Sydney on the Thursday night,’ Spiers recalls. ‘I’d met Jimmy in the morning but as it was going to be a late night, we went our own ways in the afternoon, and rested.’ It was, he emphasises, an ordinary day of duty, with the only slightly unusual aspect being the heavy fuel load the 727 was carrying for its flight to Perth.

At the holding point, the 727 crew told the aerodrome controller they were ready to take off. A Canadian Pacific Airlines DC-8-63 aircraft was on short final approach and the 727 was instructed to line-up on the runway after that aircraft landed.

’The DC-8 was a Super 63 series, which was rare in Australia, and one of us made a remark about how long it was,’ Spiers says. ‘We lined up once it had passed our threshold.’ The Canadian pilot told the inquiry into that night’s events that he had noticed the Boeing 727.

Meanwhile a Fokker F-27 Friendship reported ready and lined up behind the 727, and a DC-9 reported on 10-mile final.

As the DC-8 slowed near the end of its landing run, the aerodrome controller instructed it to ‘… take taxiway right-call on 121.7’. This instruction was acknowledged. The crew of the Canadian aircraft, however, told the inquiry held later that year they had heard the words ‘… backtrack if you like-change to 121.7’, despite the landing run of the DC-8 finishing directly opposite the entrance to taxiway ‘L’, which leads off to the right from runway 16. The Canadians set about turning the lengthy aircraft about on the runway and taxied back directly towards the Boeing 727.

It had been raining in Sydney that Friday evening and the wet runway surface heightened the need for care in taxiing the stretched DC-8. The crew made the right-hand turn on the runway slowly and carefully, ‘and took a significantly longer time than is customary for other aircraft commonly using the airport,’ the inquiry reported. The aerodrome controller saw the DC-8’s landing run finish opposite taxiway L, and saw the aircraft turn towards the taxiway. He concluded the aircraft had entered taxiway L, and he cleared the 727 for immediate take-off.

Conscious of the DC-9 on final and the Fokker waiting behind them, the TAA crew wasted no time. ‘There was no rush but we did expeditiously commence the take-off as soon as the checklist was completed,’ Spiers says. Captain James was pilot-flying and advanced the three throttles as Spiers monitored and Ryan watched engine pressure ratios and temperatures.

Ahead of them, the flight crew of the DC-8, on surface movement control radio frequency, did not hear the clearance for take-off issued to the 727.

The inquiry calculated that about 16 seconds after the take-off clearance was acknowledged, the DC-8 would have completed its turn about on the runway. The crew told the inquiry they had all four landing lights illuminated, as well as the wing flood lights, the navigation lights and the upper and lower rotating anti-collision beacons. Spiers recalls the hump in runway 16, where it passes over the road, and the lights of the Kurnell oil refinery blocking and dazzling the view of the Canadian aircraft.

A few seconds after the DC-8 captain began backtracking down the centre of the runway he saw a disquieting sight: an aircraft coming towards him. He immediately increased power and steered his aircraft off the runway towards its eastern side.

From the inquiry: ‘Before he could vacate the runway, however, but at about the time that the nose of his aircraft reached the eastern edge, the approaching aircraft, which he watched rotate and lift off, flew over the top of CF-CPQ (the DC-8). He felt a jolt which he interpreted as his nose wheel entering a depression off the edge of the runway or, alternatively, over-running an elevated runway light but, the immediate danger having passed, he then steered his aircraft back towards the centre-line of the runway.’

Captain James told the inquiry his attention was not attracted to any obstruction in his aircraft’s path until he had commenced the rotation action at 131 knots. He said it was at this point he saw the DC-8 but he judged it too close to be avoided by abandoning the take-off. He concentrated on making a well executed normal take-off, guarding particularly against over-rotation, in the belief that this would be the best means of clearing the obstructing aircraft.

As the DC-8 turned, the control tower saw the sweep of its landing lights and the surface movement controller, believing that the aircraft was commencing a turn from taxiway ‘V’ into taxiway ‘A’, which leads back onto the runway, instructed the aircraft, first of all, to ‘hold position’ and then ‘… continue straight ahead along the taxiway and cross runway 07’.

By this time, however, the DC-8 crew had another source of anxiety: the landing lights of the DC-9 approaching to land on runway 16.

The surface movement controller asked the DC-8 crew to confirm that they were on the taxiway and was told: ‘Negative sir, we’re on the runway. We were cleared to backtrack on the runway’. He instructed the approaching DC-9, to go around immediately and gave the DC-8 crew fresh instructions to vacate the runway at the next taxiway on their left.

Meanwhile Spiers and his colleagues were airborne but busy with a host of problems. ‘The aeroplane kept flying but we’d lost one of our hydraulic systems so we couldn’t raise the undercarriage,’ Spiers says. ‘I advised the tower we had struck the DC-8.’

Fuel pumps in the right wing root had also been damaged by the impact and were unavailable. ‘We kept getting out of balance and we had to stop dumping from the left wing until the right wing caught up. Whereas we’d normally have dumped in less than ten minutes, it took us nearly three-quarters of an hour. We didn’t want to land overweight because we obviously had a damaged undercarriage, but we didn’t know exactly what the damage was.’

As the aircraft settled on final for Sydney, another problem came knocking. ‘There was a loud banging noise and we stopped extending the flaps immediately. Part of the undercarriage door had been hanging on by a hydraulic or electric line. When the flaps were extended it flew around, hit the fuselage and subsequently fell off. It was found in a backyard in Sydney, without having caused any damage.’

‘I knew I had to keep on doing my job, and support the pilot and the flight engineer. It was all part of the training,’ Spiers said.

The DC-8 crew was told the departing 727 had reported striking them but, since there was no indication in the cockpit of abnormal operation, they continued to their parking bay. There it was discovered that the top 2.6 metres of the rudder and fin were missing.

Data recorders provided little information about the accident. The Canadian DC-8 had been flying with a broken flight data recorder (FDR). This was permitted under its minimum equipment list. And when the Canadian flight engineer went to pull the circuit breaker to preserve the cockpit voice recorder (CVR), he instead pulled the FDR breaker; the CVR recording was lost.

The CVR in the Boeing 727 produced a clear recording, but the convention of the time was that CVR evidence was not to be used in analysis of any accident where members of the crew survived. The inquiry was barred from hearing it and could only use the data from the 727’s FDR.

The Bureau of Air Safety Investigation report identified three factors in the accident.

1. The actions of the Canadian crew.

2. The actions of the tower controller.

3. The actions of the Australian crew.

It discussed them in terms primarily of blame, rather than system breakdown.

The report commented on how extraordinary it was that all four crew members on the DC-8 flight deck (including a check captain) had misheard the taxi clearance. It remarked on how the crew did not notice any contradiction between backtracking on the runway and tuning to surface movement frequency. It noted that the captain had not been to Sydney in nine years and had not watched a training film meant to familiarise him with the airport.

A small divergence from standard phraseology by the tower controller might have made the taxi clearance clearer.

The proper phrase, as described in an Australian aeronautical information publication was ‘take next taxiway right’ the report said, before noting that a local custom had overruled it.

‘It has been a practice in aerodrome control at Sydney Airport to omit this word on the grounds that the choice of the taxiway exit is the aircraft captain’s prerogative’.

With the benefit of hindsight, the inquiry concluded the controller should have been able to see the aircraft on that ‘dark but clear’ night.

The investigators calculated the Boeing 727 could have been stopped on the runway at a point approximately 1240 metres from the northern end or about 680 metres short of the point where the collision occurred. ‘Captain James’ adherence to normal techniques in the face of the very real hazard in front of him was erroneous,’ the report said. However, its authors conceded that Captain James had not much time to make his decision to continue take-off. ‘With the advantage of hindsight, one cannot be too critical of a decision which had to be made, presumably, in a very short space of time.’

Spiers takes a similar view, but more forcefully. ‘It was a split second decision,’ he says. ‘Abort speed is determined by the length of runway. You can’t determine an abort based on half a runway in a split second.’

Praise given to the Australian crew after the accident was terse. ‘The evidence indicates that Captain James and his crew handled the operation of the damaged aircraft with the calmness and skill to be expected having regard to their training and experience.’

Spiers says support from his employer was more generous. ‘I do know that we had the support of the company from the day after the accident. The training manager was convinced we hadn’t done anything wrong. The aeroplane was in the correct configuration for take-off, we had obeyed the instructions from the tower and we got the aeroplane back on the ground as safely as could be, after completing the necessary checklists.’

Looking back, Spiers says the modern human factors notion of confirmation bias explains more justly and efficiently than notions of fault and blame. Confirmation bias, the notion that expectation plays a large part in comprehension, does not require the presence of malice or incompetence before a mistake. ‘There was obviously human error involved, but in my opinion the air traffic controller on duty at the time was concerned about managing the threshold end of the runway, and was less focused on the far end of the runway. I believe once he saw the DC-8 turn, he concentrated his efforts on the threshold.’

‘Several people that night drew reasonable-seeming conclusions that happened to be wrong.’ 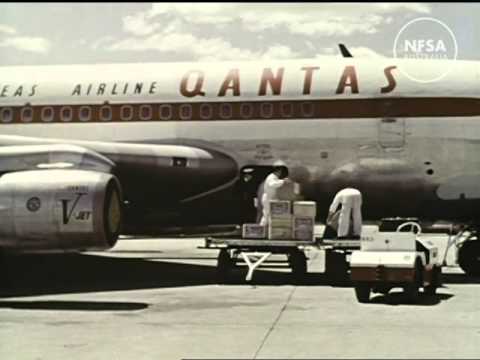 A different world: Australian aviation in 1966