In aviation warning is a good thing and is built into systems as much as possible. A stall in a fixed wing aircraft, for example, is often preceded by a nose-high attitude, airframe buffet, changes in airflow noise, the buzzing or incantation of a stall warning, or even a stick pusher. Loss of tail rotor effectiveness in a helicopter is preceded by none of these.

Consider this incident where the handling qualities of a helicopter rapidly degraded with little notice to the point where recovery was impossible. The incident involved training for an emergency utilising a technique not recommended in the helicopter flight manual that then caused another type of emergency. Practising for an excessive jammed pedal in the hover led to the helicopter losing tail rotor effectiveness.

The flight was part of endorsement training and the plan was for the instructor to simulate a stuck excess power pedal. This was done in hover by increasing the right pedal (power pedal) so that the aircraft rotated slowly right. The collective was then increased to a point where the right yaw would stop as the increased thrust from the tail rotor was balanced by the increasing torque from the main rotor system. This put the helicopter in a high hover without any rotation.

The plan was to roll the throttle off slightly decreasing main rotor rpm, reducing rotor lift, so that the aircraft would descend and land. The instructor successfully demonstrated this before handing over to the student. The student applied the same control inputs but assessed that the sink was too high and momentarily checked up on the collective to reduce the rate of descent. Very quickly the helicopter then started rotating rapidly to the left through several rotations before the instructor took control and the aircraft recovered to a normal hover. The instructor then went on to demonstrate the manoeuvre again.

During the second demonstration the instructor also checked up on the collective to reduce the rate of descent and again the helicopter started spinning to the left. This time the helicopter could not be recovered and hit the ground in a left skid low nose high attitude coming to rest on its side. The helicopter was significantly damaged, and the crew suffered minor injuries.

How did a practice excess stuck pedal emergency turn into an LTE incident?

However, there are situations when the helicopter is being operated at normal rotor rpm where LTE can be experienced. As a main rotor can experience vortex ring so can a tail rotor. If hovering sidewards or hovering with a large crosswind then there may be sufficient sidewards airflow back into the tail rotor that the tail rotor could be in a vortex ring state. This will be noticed as difficulty controlling heading and if at a heavy weight and high-density altitude may be enough to lose heading control completely. This is known as tail rotor vortex ring state and occurs in the azimuths detailed in Figure 2.

As the lateral speed or crosswind increases, the tail rotor will move through the vortex ring state and heading control will become more predictable. There will come a stage on most helicopters, however, where there is not enough tail rotor authority to counteract the lateral motion or cross wind and the aircraft will weather cock into wind. In fact, the Federal Aviation Regulation Part 27 normal category rotorcraft certification standard only requires that the helicopter is controllable in yaw with a 17-knot wind from every direction (although in this case the incident helicopter exceeded this certification requirement).

The main rotor generates vortices and if a forward crosswind blows these into the tail rotor heading control will become difficult and loss of yaw control is possible. This is known as main rotor disc vortex interference and the worst wind is from a forward quadrant on the side that the tail rotor is mounted as shown in Figure 3. 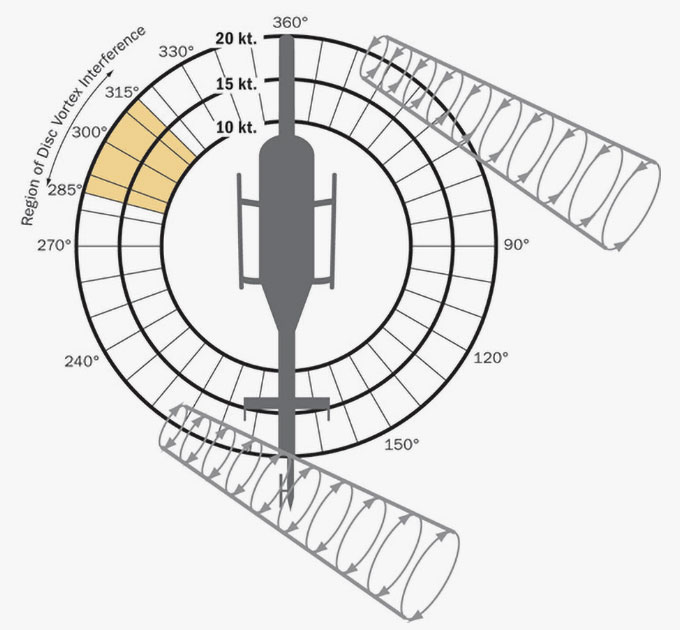 Finally, there is the effect of the wind on the fin and tail boom overcoming the power of the tail rotor and pushing the tail around so the aircraft faces into the wind. This is known as weathercock stability and occurs when hovering with a tailwind as shown in Figure 4. By the time the pilot can react and oppose the motion sufficient rotational inertia may have been generated that the yaw cannot be stopped. 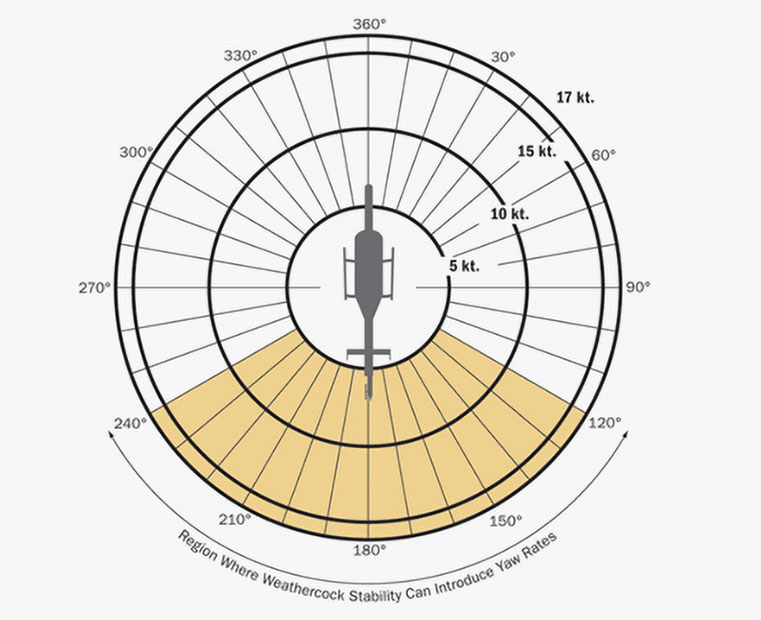 In all cases the rate of yaw can increase rapidly, and the pilot can very quickly find themselves running out of tail rotor authority to stop or even reduce the rate of yaw. At best an over torque of the transmission may be required to stop the rotation. These three effects were studied by Bell in the 1980s and the Federal Aviation Authority published guidance in Advisory Circular (AC) 90-95.

Your take away lesson: avoid or minimise the time spent in these regions or have a recovery option available if that’s where you absolutely have to fly.

All of these might indicate that you are operating with one of the three states listed above (Tail rotor vortex ring, main rotor disc vortex interference, weathercock stability). If you are just running out of tail rotor pedal due to overpitching the rotor or operating too heavy at too high a density altitude, then you may only notice a slow turn away from the power pedal with the pedal fully forward. Not all helicopters in all situations will give you this warning and it may get rapidly worse. In some cases, the first you may know about LTE is when you are halfway through a very rapid yaw. Your best philosophy is to anticipate and avoid the likely conditions that would induce LTE or plan for a safe abort option such as having the ability to lower the collective and descend.

Developing specific techniques for different helicopter emergencies on particular helicopter types is often done by experienced pilots. In this case the technique may have been practised many times without an appreciation of how close to the helicopter limits the pilot really was. It only takes a change in weather conditions, aircraft weight, an inexperienced pilot who has seen someone else do it or a moment of inattention to find out how close you have been to the cliff edge. The handling qualities of the aircraft may degrade so quickly and with so little notice that there may be no recovery. In this case, the helicopter manufacturer did not recommend this technique in the helicopter flight manual. You need a very good reason to do a different procedure from the flight manual or company operations manual.