Today is the thirtieth anniversary of a crash that demonstrated beyond all doubt that crew resource management (CRM) is a lifesaving concept.

On July 19, 1989, a McDonnell Douglas DC-10 operating United Airlines flight 232 crashed on landing at Sioux City, Iowa, US, after suffering a catastrophic failure in its tail-mounted engine, which severed all three hydraulic systems, disabling its primary flight controls. There were 296 passengers and crew on board; 111 died in the crash, one died a month later, and 184 survived.

Flight 232 was on its way from Denver to Chicago when the DC-10’s tail mounted number two engine exploded. This announced itself on the flight deck with a loud bang and the throttle for the number two engine snapping shut. As the flight engineer, Dudley Dvorak, watched, hydraulic pressure in all three systems fell to zero the aircraft began yawing and banking right and first officer William Records, who had been pilot flying, disengaged the autopilot and attempted to correct its course. Soon after, Records reported to the captain, Al Haynes, that the aircraft was not responding to movements of the yoke or pedals. Haynes confirmed this by inputs to the captain’s controls. He then used differential thrust to pick up the right wing by advancing the right engine throttle.

A check airman from United Airlines’ simulator centre, Dennis Fitch, was travelling as a passenger. He joined the crew, and assisted with controlling the aircraft by taking over the throttles. With the aircraft was unable to turn left the crew were flying it to Sioux City Gateway Airport, Iowa, in a series of right turns. As well as controlling heading, Fitch was also attempting to minimise the phugoid cycles of climb and descent the aircraft was subject to after being unable to maintain its trimmed speed. In the midst of this he had the presence of mind to relieve the tension with jokes. He told Haynes, ‘I tell you what, we’ll have a beer when this is all done,’ to which the captain replied ‘Well I don’t drink, but I’ll sure as hell have one.’ (Haynes actually used a slightly coarser term, but the National Transportation Safety Board cleaned up the CVR transcript.)

He was clear-eyed about the chances of success, telling a flight attendant, ‘If we have to evacuate you’ll get the command signal to evacuate, but I really have my doubts you’ll see us standing up.’

As they neared the airport, a feat crews in simulators were unable to reproduce, Fitch was optimistic. Years later he told a television interviewer, ‘We were gonna open eight doors, slides are gonna inflate, 296 souls are going to slide down, and we’re going to the nearest saloon and I’m buying.’

But nearing the threshold the entered another phugoid, with a sink rate of more than 1800 feet/min. Fitch advanced the throttles to control the descent, explaining his decision to the rest of the crew as he did so: ‘I can’t pull ‘em off or you’ll lose it – that’s what’s turning you.’ At 215 knots the right wing struck the ground and detached, causing the lift from the left wing to roll the fuselage, which broke almost at once into four sections.

As well as the extraordinary coordination and skill of the flight crew, which the NTSB said ‘greatly exceeded reasonable expectations,’ several other factors helped those on board survive:

Among the sections of wreckage found was an unrecognisable shed-sized ball of aluminium – the remains of the flight deck. All four crew members were still alive, although injured to varying degrees of seriousness. Fitch died from cancer in 2012 but the other crew members are still living and Haynes, now retired, has spoken publicly nearly 2000 times (without accepting payment) about the crash and its many safety lessons.

Three months after the crash, a farmer in Iowa discovered pieces of a jet engine in a field of corn. It was the fan disc from flight 232. Its disintegration had sent turbofan blades flying through the rear fuselage of the aircraft, severing hydraulic lines. Eighteen years earlier, when the disc was being made, a microstructural defect resulting from inadequate vacuum when the metal was melted had formed a cavity in the rotor. Six routine inspections, including dye penetrant testing over the disc’s service life had failed to spot this tiny defect, and after 17 years in service and 41,000 hours the rotor failed.

The crash highlighted the lack of protection given to very young children travelling unrestrained on their parents’ laps, one of whom died. In Australia, infants and children must be secured in an approved child restraint system throughout the flight.

McDonnell Douglas added hydraulic fuse valves to the DC-10 to ensure that total hydraulic loss could never happen again, even if all three systems were breached. Interestingly, flight 232 was not the first time an airliner had lost three hydraulic systems as a result of an uncontained engine failure. In September 1981 Eastern Airlines flight 935, a Lockheed L-1011 Tristar had had a failure of its tail engine. The failure, caused by a lack of lubrication, had taken out the rudder controls, but the L-1011 had four redundant hydraulic systems and the crew were able to return to Kennedy Airport, New York using elevators, ailerons, and differential thrust for turn coordination and yaw control. The Tristar returned to a boarding gate and all passengers got off without injury. 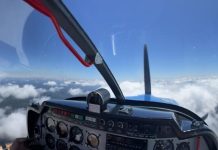 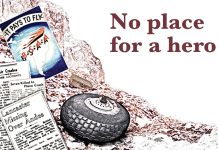