The aviation industry has undergone a tectonic shift during the pandemic and flight crews are seeing their careers abruptly on hold. In what form will the industry emerge, given shifting attitudes to business and leisure travel?

By common consent the COVID-19 crisis is the worst setback in the history of flight.

Qantas chief executive Alan Joyce described it as ‘the worst crisis the aviation industry has gone through’. United Airlines chief executive Oscar Munoz has called it ‘the most disruptive global crisis in the history of aviation’.

Around the world, 22 airlines have gone into bankruptcy or administration. Manufacturers and operators including Airbus, Rolls-Royce, British Airways, Ryanair and Qantas announced job cuts totalling tens of thousands. Fortune magazine estimated 670,000 aviation jobs had disappeared by June 2020. With 92 per cent of its fleet on the ground, Lufthansa put 80,000 of its 130,000 workforce on shortened hours.

The International Air Transport Association (IATA) says air transport is likely to witness a dive in revenue of 55 per cent in 2020 compared to 2019. IATA expects the resulting slump to lead to 32 million job losses.

Numbers like this raise the question of the industry’s survival and future form. The crisis brings subtle and widespread aviation hazards in its wake, such as operational disruption and the insidious burden it places on the mental health of those who work in the industry.

Chairman Emeritus of the CAPA – Centre for Aviation Peter Harbison says two distinctive factors make the COVID-19 crisis unprecedented for aviation—it is a global as opposed to regional crisis (such as the SARS, bird flu and MERS outbreaks) and it involves a tectonic shift for the world’s economy. ‘Aviation is among the more fragile industries, especially international air transport, where recovery will take years,’ he says.

Harbison says the most difficult feature of the COVID-19 crisis is the high degree of uncertainty it has brought. ‘We are only at the beginning of this dual health/economic crisis. Governments have mostly done the sensible things to bridge the short-term employment and airline financial issues. But when the temporary fixes expire, repeating the medicine will not be so straightforward,’ he says.

The Economist newspaper has reported on many economic upheavals since its foundation in 1843. By its reckoning, ‘Most of the industry should pull through if the situation lasts one or two quarters. Any longer, and the future of air travel could be altered for good.’

The revered publication went on to intone, ‘Perhaps the greatest uncertainty concerns shifting attitudes to business and leisure travel. If corporations detect that they can operate with fewer executives flitting round the globe, and holidaymakers get a taste for “staycations” or trains, compounded by “flight shame” over aeroplanes’ carbon emissions, the industry may struggle to keep doubling passenger volumes every 15 years, as it has done for the past three decades. The coronavirus is already proving to be quite the braking parachute. It may arrest momentum more dramatically still.’

COVID-19 emerges as an aviation hazard in five ways:

Distractions: Brought down by a virus

There may already be a terrible example of how the pandemic can affect aviation safety. On 22 May 2020 Pakistan International Airlines flight 8303, an Airbus A320, crashed near Karachi airport, killing 97 of the 99 people on board and one person on the ground. It had touched down with its landing gear retracted and taken off again for a go-around that ended with a crash when both engines failed. The inquiry into why the crew of flight 8303 made such a basic and usually well protected human error continues but Pakistan’s Minister for Civil Aviation, Ghulam Sarwar Khan, told the Khaleej Times newspaper, ‘In the last half hour, the pilots’ discussion was about coronavirus, they were not focused as their families were affected’.

In Australia, 2020 will be remembered for two unwelcome events—the massive fires at the start of the year and the crisis and lockdown that began in earnest in March. General manager of the National Aerial Firefighting Centre Richard Alder must deal with both fire and plague in his preparations for the 2020–21 fire season.

The viral crisis has already affected licence renewal and testing and proficiency checking regimes. ‘It also impacts the ability to do proficiency training such as helicopter underwater escape training in swimming pools,’ he says.

‘The second effect of COVID-19 will be on overseas aircraft and crews that come Down Under for the fire season. Although about 90 per cent of aerial firefighting aircraft and pilots are based in Australia, some sectors such as heavy helicopters and large air tankers have a much higher “foreign legion”.

‘We anticipate those aircraft and crews will still be able to move but it will require more pre-planning, earlier notice and additional costs. We will need additional crews to meet quarantine and isolation requirements, which are a moving target, and which will have moved again by the time we get into the thick of the season in November and December.’

The third effect of the virus will be on operations during the bushfire season, which can begin as early as August in northern Australia. ‘We are working with our contractors now to establish the protocols and contingencies they will need to have to operate effectively when the bushfire season overlaps with COVID-19.’

Crossing state borders will be one of the protocols to be worked out, Alder says. ‘It’s mainly about having consistent approaches to minimising the risks of crews becoming affected by the virus and, if they do, having contingency arrangements in place for other crews.’

Lecturer in aviation at Central Queensland University Wayne Martin made his academic reputation studying the effects of short-term stress on pilot performance. Now he is contemplating the insidious effects of long-term stress. He says the COVID-19 crisis ‘will definitely increase the workload pilots have to deal with in their lives and on the flight deck.’

‘There’s likely to be a higher prevalence of anxiety and chronic stress in the pilot community,’ he says. ‘Uncertainty, financial and lifestyle pressures, the longevity of people’s chosen careers—all of those things contribute to the ongoing stress.’

For pilots still flying, chronic stress is ‘always problematic on the flight deck’, he says.

It’s a perfect example of aerobatic champion Matt Hall’s bucket analogy of mental load, Martin says. ‘If you have a level of chronic stress that’s higher than normal and you have an acute stressor on top, the chances of you going past your peak operating ability and into an area of overstress becomes more pronounced.’

As president of HIMS Australia, Andrew O’Meally manages an innovative program that brings together unions, employers and CASA to assist pilots with substance misuse issues and to get back in the air in a safe and timely manner using peer support. He says the viral crisis has undoubtedly increased the likelihood of substance abuse in aviation.

This is the first time aviation has been brought to a standstill. There is no flying but an increase in drinking while pilots are at home.

O’Meally cites figures from the Foundation for Alcohol Research and Education that found:

‘Both Qantas and Virgin pilots are stressed out. Some don’t know if they’ll ever have a job again,’ O’Meally says.

Anecdotally, he is hearing about increased drug use among pilots. ‘Word on the street is that some pilots who would not use illicit drugs because of the testing regime—THC, or marijuana, stays in the system for more than 30 days—are taking advantage of an opportunity to have a holiday from testing,’ he says.

O’Meally points to several specific pressures the crisis has imposed on pilots. ‘There’s a loss of identity, both of being a pilot itself and the pride of being with an organisation. I’m hearing of highly experienced pilots who are applying for jobs as drivers for supermarkets—and getting knocked back. It’s devastating. One guy I heard of applied for 80 positions and didn’t get a thing.’

Martin concurs. ‘For pilots, self-image is closely bound with the profession,’ he says. ‘It’s a job that people work very hard to get into and to stay in, and they are afforded a certain status in the community and among their peers. When suddenly that is removed, for whatever reason, it’s reasonable to assume there is a downside.

‘You only have to look back to the Ansett collapse when there were a number of suicides and premature deaths that appeared to be correlated, if not connected, to the airline’s demise.’

For grounded pilots, the income drop is severe, O’Meally says. ‘A captain would be on the equivalent of $400 an hour and a supermarket pays about $22 an hour—there’s no in-between, no jobs for pilots at $100 an hour. Their skills are unique, specialised and suddenly worth nothing.’

He says loss of certainty is a psychological blow that comes with loss of income. ‘Lifestyles built on the foundation of high-paying jobs are gone. Now there’s an oversupply of pilots, with local airlines laying off and expatriate pilots returning.’

Pilots typically also find loss of autonomy unsettling. ‘We like the certainty of control, even though we are trained to deal with uncertainty in emergencies. Uncertainty in your life is another matter,’ O’Meally says. ‘For a lot of people, everything is suddenly a mess—they’re not where they thought they would be and there’s no clear path for the rest of their careers.’

He is also concerned about the effects of isolation on the pilot community. ‘A lot of people are isolating themselves, which is really dangerous.

At the time when camaraderie is most needed, there’s no opportunity for it.

O’Meally says returning to normal operations after such a complete shutdown will reveal these stresses. He is concerned that the issues be addressed before crews return to the flight deck.

‘At the moment, the DAMEs are the ones who have the potential to intercept the mental health and substance abuse problems. They’re really the only defence at the moment. If the DAMEs can ask the right questions in an environment of trust people can be steered towards rehabilitation and counselling before they go back to work.’

Martin says a slim silver lining is that since the Germanwings pilot suicide crash of 2015 more mental health support has been available.

‘Exposure of the industry to mental health challenges through Germanwings and MH 370 have highlighted that pilot stress and mental health were hidden issues. Since then there has been a lot of work going on, peer support programs have popped up and CASA has recognised the issue. At least now there are some processes for dealing with stress.’

For Martin, the effects of COVID-19 are more than an academic concern. In addition to his academic role he is a Boeing 777 pilot on international operations—or was. Since the lockdown he has sold his house and downsized to a smaller place. ‘I’m hoping my flying career can resume and that it runs its natural course, but nothing is certain,’ he says.

Perhaps the most critical issue for restoring travel is providing passengers with a feeling they will be safe flying, Harbison says. ‘The solution involves a combination of perception and reality and requires standardisation of behaviour among different airlines and even internally, to ensure that all flight crew buy into the programs wholeheartedly. For example, if the rule is that masks must be worn, there should be absolute adherence to this.’

Harbison says extensive and coordinated effort will be needed to produce the new version of normality when travel begins again. ‘All airlines and airports must be able to provide consistency of behaviour so passengers feel comfortable, and all links in the travel chain must introduce real, effective safety measures. Cosmetic measures have some value but without genuine measures—often high-tech—that will not be enough.’

Cranfield University lecturer in air transport management Darren Ellis is optimistic. ‘It will take time to recover from the pandemic,’ he says. ‘Some airlines will fail. But widespread changes to the industry’s structure are unlikely to occur. People will, of course, need and want to travel by air again when this pandemic is over.’ 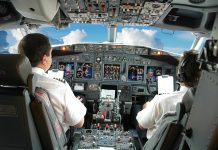 An ill wind: COVID-19 and aviation